Origin of “beat” as a census division?

In one sense, the word beat means an area regularly traversed by someone, such as a police officer. I'm wondering about the origin of this term as applied to an obsolete type of census division in some southern states, such as Mississippi. Specifically, were these simply existing police beats adopted for the purposes of enumeration? Or did the Census Bureau devise its own precincts based on the same sense of the word—i.e., an area that might be traversed or canvassed by a particular census-taker?

There's some evidence for the former, as genealogy web sites refer to subdivisions called "police districts" at around the same time; some even explicitly mention "police beats", but they may be applying the term conjecturally. And still today, police beats are used for certain types of record-keeping, such as crime statistics. But is there any history of the term beat being used for an enumeration district, separate from the context of a police beat?

The OED acknowledges this as definition 10.d.:

d. ‘In Alabama and Mississippi, the principal subdivision of a county; a voting-precinct’ ( Cent. Dict. 1889).

The earliest attestation is from 1860 and uses the word alternated with "precinct."

Governor Holmes appointed me..commissioner to take the census and organize beats or precincts.

As for etymology, the OED offers no notes apart from the attribution to The Century Dictionary first edition.

The full text of that edition was made available by the University of Toronto, and the relevant entry for beat can be viewed here. 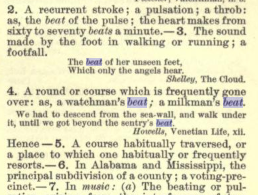 4. A round or course which is frequently gone over: as, a watchman's beat; a milkman's beat...

Hence — 5. A course habitually traversed, or a place to which one habitually or frequently resorts. — 6. In Alabama and Mississippi, the principal subdivision of a county; a voting precinct.

It appears from the dictionaries that the census use was an outgrowth of the "police beat" use, but one specific to Alabama and Mississippi. The OED, as mentioned earlier, placed this definition under 10., which contains definitions referring to a course or area often traversed, and it cites earlier dates referring to a watchman's beat.

The word "Hence" used by Century Dictionary seems to be a similar acknowledgment that its definitions 5 and 6 grew out of 4.

Although the OED offers an 1860 citation, the term can be found earlier in public notices. 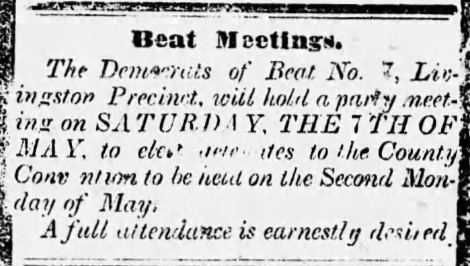 etymonline.com says the meaning of a "regular route travelled by someone" dates to 1731. I don't know if policemen of that time had regular routes like they do in more modern times. It seems like the use for police patrols and census taker coverage are just specific cases of this general use. A suggested origin is that it's related to the way their feet beat on the ground as they walk their route.

Here's what I believe to be the answer: the term beat, in this sense, can be said to have originated with police—but not in the way you might expect. At the same time, the term also has a long connection with census-taking—but not in the way I've described. (Moreover, the present sense of a police beat, in the sense of a patrol area, may be a sibling, rather than a parent, of the sense referred to in census records.)

In short, the answer to my question is "no, neither—but also sort of both!"

The Census Bureau's own publications discuss the history of its statistical subdivisions. Prior to 1950, according to chapter 8 of the Geographic Areas Reference Manual,

various administrative units or other area designations were used, such as companies, districts, hundreds,

…and beats. At first, these "minor civil divisions" were used in all states, but were often found to be impractical.

Many States in the southern and western parts of the United States had few or no subcounty governmental units that could serve as an adequate geographic framework for census purposes. The MCDs in those States frequently proved difficult to enumerate because their boundaries and names were not well known locally or were subject to frequent change. […] In addition, most data users found these MCDs unsatisfactory for purposes of statistical analysis because of frequent name changes and boundary shifts that resulted in a lack of geographic comparability.

So, from the 1950 census onward, the bureau devised its own statistical entities called "census county divisions," which were relatively stable and well-delineated, for use in most southern and western states. Importantly, the use of "beats" as census divisions long predates the 1950 census, so the term couldn't have originated with the Census Bureau as they did not yet create their own statistical county subdivisons—they used existing ones.

Now, from the attestation above:

Governor Holmes appointed me..commissioner to take the census and organize beats or precincts.

The governing body of a county in Mississippi is the board of supervisors; in Alabama, they are county commissioners. Thus, the person who regularly traversed this "beat" was the county commissioner, or supervisor*. Note that one of this person's administrative duties was, indeed, to conduct a census—but this was a local position, not carried out by the federal Census Bureau. While that agency did later adopt the term for the same purpose, it was adopting a term already in use by county officials.

In Mississippi, the county governing body, or board of supervisors as it is called today, is officially part of the judicial branch of government. Historically, such a structure has always existed in the state. The first Constitution (1817) established this model and it was continued in all three later Constitutions (1832, 1869, and 1890). The judicial branch was seen as an appropriate home for this county governing body since its predecessor was the probate court that was sanctioned by the 1817 Constitution and empowered with police and certain administrative powers. The 1832 Constitution established a five-member board of police elected for two year terms to serve as the county governing body. This board’s jurisdiction, in addition to police powers, was later expanded to include managing highways, roads, ferries, and bridges, and ordering elections to fill vacancies in county offices.

The Mississippi Constitution of 1869 was the state’s first to mandate a five-member board of supervisors elected by district for two year terms. This board, replacing the previous board of police, was similarly authorized to manage roads, bridges, and ferries, as well as order elections to fill county office vacancies.

That legacy persists to this day in Mississippi, where the beat system is still used to administer public works, and county supervisors still carry out road and bridge maintenance according to beats. (The beat system was the default organizational method until 1988, when it became an elective option after a notorious FBI corruption sting, an event referred to on this Wikipedia page and fully recounted in this book (see p.103 for an excerpt about the beat system). It also persists in nearby Louisiana, where counties are known as parishes, whose governing body is a non-law enforcement body known as a police jury.

*n.b: David Holmes was an early governor of Mississippi, so the two terms have been interchanged through history. His last term ended in 1826, so his appointee's title may have been "police commissioner" (from the board of police), or it may not have been a county position at all, but an office within the state government responsible for the administrative functions that at the time were being delegated to the still-nascent counties. Regardless, the term beat has always been closely associated with the individual territory of each county supervisor, most prominently with respect to road maintenance.

I don't have evidence for this, but 'beat' applies to areas of responsibility other than police.

an area for which someone, such as a police officer, has responsibility as part of their job

In the past census taking was done by census takers visiting each house in the land and asking questions, rather than by getting households to write down their own answers. I think it very likely that each census taker was assigned a specific area which would be called a 'beat'.