Is there a word for the stone slab that lays horizontally on top of a grave? In the image it would be on the grave on the left. 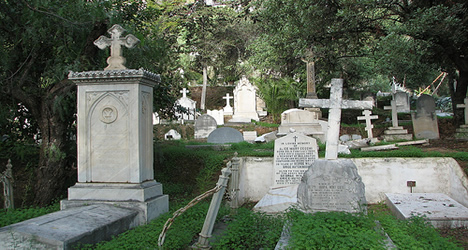 The companies that make these grave markers refer to them as ledgers or full grave ledgers.

There are a couple of options.

Traditionally, the stone covering a grave is called a gravestone or tombstone. Oxford Dictionaries for tombstone:

Meanwhile, the Oxford English Dictionary has this to say about gravestone, a term that goes back to Middle English:

From the 17th century onward the stone at the head of the grave and marking the name and dates of the person buried would be called a headstone. Oxford Dictionaries:

A slab of stone set up at the head of a grave, typically inscribed with the name of the dead person.

However, note that in casual use these three labels aren't always clearly distinguished - the gravestone and tombstone entries have a meaning virtually identical to the headstone. For that reason, if you want to distinguish the covering from the headstone, gravestone slab or tombstone slab is a possible collocation. In Google Books it turns up several technical or archaeological descriptions, like this one from 1900:

Upper right hand corner of a tombstone slab with moulded border, 27 inches by 20 inches, with large letters. Found in the North Wall (West) in November 1890.

5
What is the word for "stepping stone" if it is used in a derogatory sense?
2
Is there a word for the final stone of a foundation?
15
Is there a common word for floor and ceiling?
5
What is the difference between "pallet" and "skid"
4
Word for folding/tucking socks together?
1
What would the Rosetta stone be defined as?
4
Word for the direction of written words
2
Is there a way to locate something relative to a grave?
0
Best word for mass of uninterrupted material