Why is the English word of Chinese origin "Shih Tzu" used to refer to a dog breed not known in Chinese as "Shih Tzu"?

It is well known that it comes from a Wade-Giles transcription of the Mandarin Chinese word for "lion dog" (獅子狗 shih1-tzu0-kou3, from 獅子 "lion" + 狗 "dog"). This is part is indubitable. There's no doubt about it.

In spite of that, there are a couple of problems.

The English Wikipedia article for Shih Tzu and some of its sources (some may have been removed) claim that the Shih Tzu is so named due to its resemblance to the lion. The Wiktionary entry for Shih Tzu even goes so far to claim that it resembles those Chinese guardian lion statues in the imperial palace or in front of feudal officials' residences.

However, the breed's name in Chinese actually translates to "Xi Shi dog", with Xi Shi being one of the four most beautiful women in Chinese history. Through the Chinese Wikipedia article for the breed and Google Translate, I've learned that this breed may have been called "lion dog" and renamed for "marketing purposes", although this claim has no sources to back it up. Meanwhile, the name "lion dog", in proper Chinese, refers to the Pekingese, a completely different breed that, if you ask me, better resembles lion statues.

So why is the English word of Chinese origin "Shih Tzu" used to refer to a dog breed not known in Chinese as "Shih Tzu"?

Was it really the original name of this breed? Or is it used in English etymologically erroneously for some reason? Was there a name change in Chinese which led to the etymological discrepancy between the English name of the breed and its Chinese name? Or was it just that the English-speaking world somehow confused two different dog breeds?

Edit: I'd like to stress that this is a question on etymology. And the etymology of English loanwords obviously has to concern with the source languages or the original circumstance around the time English borrowed from that source. I'm aware that there may not be any etymologists here who has a bit understanding of the original Chinese words ("lion", "lion dog" or the like), but unfortunately there is no "etymology stackexchange" for me to rely on.

The 1921 work, Dogs of China & Japan in Nature and Art, by V.W.F. Collier, cited in OED (paywalled) as the origin of the English name ('shih-tzu') of the breed, completely addresses your question, although not directly:

Shows, breeding to closely defined points, and the keeping of careful pedigrees, have never existed in China. The only recognized standards to which dogs have been bred are those contained in the dog-books of each Imperial master, as painted by the Court painters. 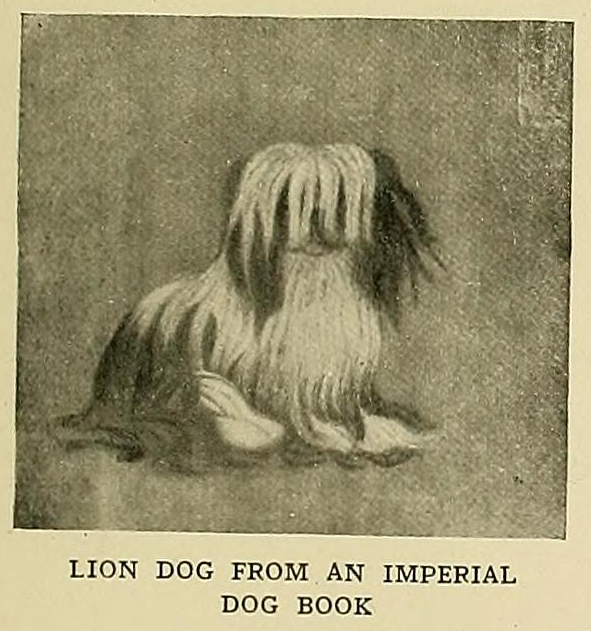 The Chinese lion-dog ("Shih-tzu kou") is so called chiefly on account of the length and shagginess of its coat. The Chinese readily apply the name [shih-tzu kou] to any long-coated dog, whether native or foreign, large or small.

Collier adopted 'Shih-tzu' (not shih-tzu kou) as the name of the breed in English.

The chronological history of the later (?) adoption of Xi Shi in contemporary Chinese as the name of the breed, and (presumably) its subsequent adoption and use in English as an alternative name of the shi-tzu breed, cannot be readily ascertained by this non-Chinese speaker.

Although you refer to the Pekingese as "a completely different breed", the distinction between the terms "Pekingese" and "Shih Tzu" might not have been so clear in the past. There seems to have been confusion/conflation of different Asian breeds of dogs and as far as I can tell, the history of these breeds is still not fully resolved today.

The first OED citation for "Shih Tzu", from 1921, refers to "dogs closely resembling the ‘Pekingese’ type, as also the ‘Shih-tzu’ dog and the ‘Pug’" (V. W. F. Collier Dogs China & Japan; see JEL's answer for more information about this source).

The second OED citation is to a Kennel Gazette article from May 1934. I haven't been able to read a copy of it yet, but the quote refers to "Apsos", so it might be the article "on the various Tibetan breeds of dogs both in this country and Tibet" that Irma Bayley reports writing. In the past, the terms "Shih Tzu" and "Lhasa Apso" were not (or at least not always) differentiated, according to the blog post "Difference Between a Shih Tzu and Lhasa Apso". That blog post also says that the Shih Tzu breed "originated from a mix of the Lhasa Apso and Pekingese dog breeds", although I haven't verified that this is true.

The "History" section of the linked Wikipedia article makes the following relevant statements:

I found another article that seems relevant: "Ancient Breeds – Shih Tzu, Tibetan Terrier, and Lhasa Apso", by Amy Fernandez, October 2014. Fernandez says that "in June 1934 the Kennel Gazette reported that descendants of three dogs that had been initially registered as Apsos were reclassified as Shih Tzu. [...] Shih Tzu imports continued to be AKC registered as Apso until 1952 when the Shih Tzu Club managed to stop the madness". You can tell from the word choice that this is not exactly an impartial source, but my main point in quoting this is that it seems that the Shih Tzu Club played an important role in forming the modern conception in English-speaking countries of a "Shih Tzu" breed.

Not the answer you're looking for? Browse other questions tagged etymology loanwords or ask your own question.