Is there a word for when you grab somebody, spin them around, and throw them?

I've seen a move like this in games like Tekken and Yakuza, typically by characters with unrefined fighting mastery. Below are links showcasing the move in question in both Tekken 7 and Yakuza Kiwami 2, respectively.

I'm curious as to whether or not there is an official or a colloquial term for this kind of barroom-brawl-style fighting move. Thank you in advance!

I don't know what the combined move would be as a fighting technique.

It starts of with what I'd describe, in pair figure skating, as a pair spin. 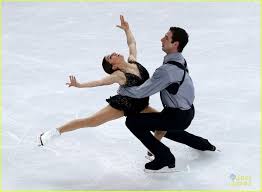 It would then be followed by one person being thrown after momentum had built up. So, possibly just spin and throw.

The act of building up something's momentum and then releasing it in a redirected trajectory (sometimes due to an actual spin) is also described as a slingshot:

2 a : a maneuver in auto racing in which a drafting car accelerates past the car in front by taking advantage of reserve power
b : a dragster in which the driver sits behind the rear wheels

Although the definition wouldn't seem to apply (in fact, I've always thought of that maneuver as drafting), the word is used in Merriam-Webster's first example sentence to describe principles of centrifugal (or spinning) force:

Oxford Dictionaries has a more directly relevant definition of this sense of the word:

[mass noun, often as modifier] The effect of the gravitational pull of a celestial object in accelerating and changing the course of another object or a spacecraft.

0
Is there a word or phrase for helping someone when you are better equipped than them?
2
Term for when work gets passed around instead of being executed
0
Is there a word for when you hear what you want to hear rather than the word(s) one actually said to you?
2
Word to describes the money that you lend to somebody?
1
A term for when people insist on giving you help you didn't ask for?