In contemporary use, does 'white noise' enjoy common figurative meaning?

In at least the ELU hyperlocal environment, the claim that 'white noise' has only one meaning seems to be mostly unchallenged.

For example, as commentary on a recent question (now on hold) titled "White Noises...", where "white noises" was used with a common colloquial sense (as well as one or more potential jocular senses), this comment appeared (emphasis mine):

The title of this question is misleading. The term white noise is taken: en.wikipedia.org/wiki/White_noise.

Later, another comment to the same effect showed up (emphasis mine):

White noise has a specific meaning.

The claims flabbergasted me. The idea that any phrase in common use in English could have only one meaning seems obviously contrary to fact. Equally absurd was the claim that a term (in common use etc.) could be "taken" and thereafter reject all subsequent changes and development of meaning.

In this case, a simple lookup in OED (paywalled), a historical dictionary which is not renowned for up-to-the-minute lexicography, reveals that 'white noise' has at least two major senses.

The first sense recorded in OED, shown in an entry updated a mere 4 years ago, is the well-known technical sense:

1. Noise that has effectively equal energy intensities at all frequencies etc.

The second sense (op. cit.), attested as recently as 2014, gives the broader but (to me) common colloquial denotation:

2. A continuously delivered mass of information, facts, etc., in which detail is obscured.

In addition to those two senses, the second of which applies to my use of the term in the question title, I speculate on the basis of my "intelligence guided by my experience" (Rex Stout) that 'white noise' has acquired more figurative senses even than that given as sense 2 by OED, which derives from the original technical term (OED sense 1).

Can anyone provide solid evidence corroborating my speculation that 'white noise' presently enjoys common, more figurative use than what is shown as OED sense 2?

IME (in my experience), it means "innocuous background noise", where "noise" can be figurative, like "office politics which are designed to distract you from the task at hand".

I used OneLook to check about 20 different dictionaries, and the only one which supported [a supplementary, that is, non-technical or figurative use] was Merriam-Webster. In fact, it's the only one with any definition supplementary to the OED ones you quote. Here's what it has to say:

meaningless or distracting commotion, hubbub, or chatter
// "the white noise of policy and politics in America"
— Joseph Nocera.

I agree with the "everpresent, unavoidable" character it describes, and should have noted it in my original comment.

He has discussed many times the world leaning on the precipice of disaster, on more regime away from destruction. In White Noise it is the literal "noise" of the television buzzing in the background of every home — empty conversation, the possible noise of death, like an electrical transformer, along with the arrival of a physical toxic cloud.

From White Noise, by Don DeLillo:

...it is both the background noise that constantly bombards us and a way for us to avoid that bombardment...Thus the term "white noise" can be used in either a positive or a pejorative sense, depending on whether it refers to an unremitting noise one is trying to escape or to the sound introduced as escape....

Finally, googling "white noise" racism is instructive. One apparently somewhat-common metaphorical usage of the term is "the discourse among white persons about race relations".

"Noise" is energy with a random rhythm. "Frequencies", of course, refers to positions on a "spectrum". If the strength ("energy intensity") is equal across a spectrum that means that the noise is coming in short and long and in-between bursts, as a steady flow.

One version of a spectrum: 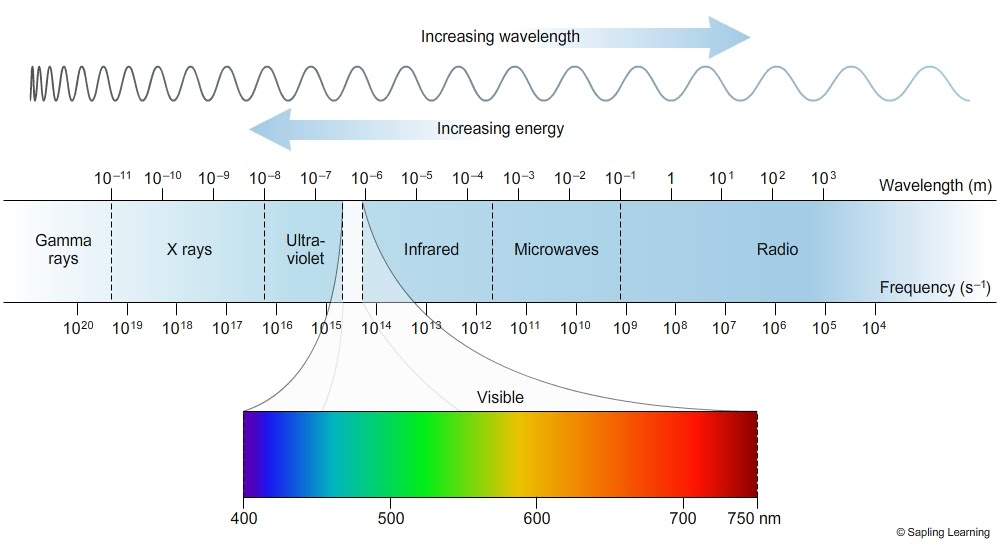 The implication is that the information is not focused on, say, the right or the left, but is spread across at least some portion of the political spectrum. It comes in a steady flow, and the detail is "obscured".

Of course, as in any discussion involving political concepts, the definition is apt to be stretched a bit (especially when using the "white noise" term to imply malfeasance of your opponent). But taking this all into consideration, the two definitions are about as identical as could be hoped.

In the case of your problematic title, I do not see how it at all refers to "noise" (random or obscured information), nor how the apparent subject of your question somehow references a "continuous mass" of information.

6
Does "awe" have a colloquial meaning (similar to "awesome")?
8
Is the use of the word “terrible” in a positive sense at all common?
6
The introduction of manmade structures in the etymology of harbor
56
White Noise: Why White?
1
"Hieratic purposes"
1
treacly vs. syrupy in figurative use
0
Can all phrases that are considered idioms sometimes fall under the category of slang? Are they under the colloquial category because of everyday use?
3
Where does the expression to ‘commune with nature’ come from?