What is the meaning and origin of “set-piece battle”?

The definition I've found that makes the most sense is Wikipedia's:

In warfare, a set piece battle may involve large formations moving according to a plan and responding to the opposing force also by plan.

So I assume the point is that the course of the battle is decided in advance, as opposed something ad-hoc or improvised.

But what's the origin of the term? And what are its opposites?

According to this Ngram, this exact wording appears to have been coined during the First World War, and usage increased dramatically during the Second World War.

The earliest use of set-piece battle I found is from 1920, in The Australian victories in France in 1918 by Sir John Monash. On page 227 is a section which begins: 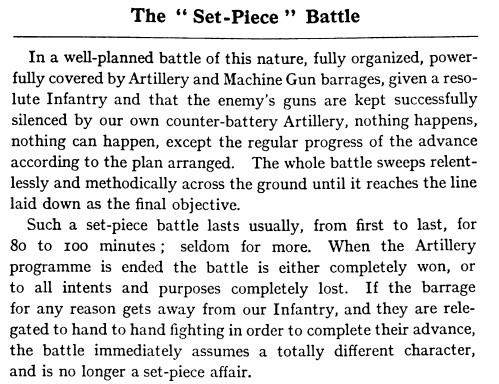 And the preceding page:

The standalone set-piece is:

It was very common in drama and when referring to fireworks displays in the 19th century. Wikipedia says:

In film production, a setpiece is a scene or sequence of scenes the execution of which requires serious logistical planning and considerable expenditure of money. The term setpiece is often used more broadly to describe any important dramatic or comedic highpoint in a film or story, particularly those that provide some kind of dramatic payoff, resolution, or transition.

The term set piece or set play is used in association football and rugby to refer to a situation when the ball is returned to open play following a stoppage, particularly in a forward area of the pitch.

The earliest reference I found to set-piece in a military context to describe a carefully planned and executed action (and not describing a dramatic depiction of a battle) is this 1895 footnote to Herodotus:

1905's The Times History of the War in South Africa, 1899-1902 compares carefully planned and executed operations with field-days at Aldershot Command training camp:

Monash refers to three different phases, each with very different character. From page 84 of The Australian victories in France in 1918:

In MOST battles, at least one side (the defense) has a chance to "set up" (dig trenches, post artillery and mines, etc.). Sometimes the offense also has the opportunity to emplace its artillery, deploy its cavalry, form infantry lines, etc., without interference from defending forces before the battle begins. In this case, the battle will proceed along pre-determined lines shaped by these deployments. That's a "set piece" battle.

The opposite of a set piece battle is a "meeting engagement." That is when forces collide with each other on the road, and start fighting, without having time to entrench, deploy, etc. Such an action is more like a "brawl" than a real battle. An example was the battle of Lundy's Lane in the War of 1812. A more modern example is the Battle of Kursk (second stage), in which, after initial success, the Germans moved too far east (to extend their gains), and collided with the reinforcing Russian armies.

In art, a "set piece" is something that has been carefully arranged for a particular effect. My guess is that "set piece battle" simply extends the concept from art to warfare.

Not the answer you're looking for? Browse other questions tagged meaning etymology history or ask your own question.