In a book I'm reading there's the following phrase:

In the study, her computer, a top-of-the-range wafer of stainless steel, is protected by civilian security software...

My question is what does wafer mean in this piece of text?

From the context, my guess is that it's sort of extra-slim laptop. But it's still a guess.

Googling was not helpful, for the word in question has too many meanings in the world of electronics, computing etc.

The quote comes from the book Codename Villanelle by Luke Jennings. The full paragraph reads

No one ever visits her here – her professional meetings take place in cafés and public parks, her sexual liaisons are mostly conducted in hotels – but if they were to do so, the apartment would bear out her cover story in every detail. In the study, her computer, a top-of-the-range wafer of stainless steel, is protected by civilian security software that a half-way skilled hacker would quickly bypass. But a scan of its contents would reveal little more than the details of a successful day-trading account, and the contents of the filing cabinet are similarly non-committal. There is no music system. Music, for Villanelle, is at best a pointless irritation and at worst a lethal danger. In silence lies safety.

The author could be using wafer as a simile between computer and wafer, to indicate that the computer was thin. He uses the same word exactly once more in another part of the novel, but that time he makes it clear that the intention is to refer to the shape.

From the Fendi shoulder bag she takes a briquet lighter, a crumpled blue cotton frock, a pair of wafer-thin sandals and a lingerie-fabric money belt.

Now, in the first quote it is also possible that wafer is being used as a substitute for computer. Instead of repeating the same word inside the same sentence, the author, as good practice recommends, opts to replace it by another word. Instead of simply using a synonym or a more general term he chooses a synecdoche. This is, calling a thing by the name of one of its parts. In this case the part is the silicon slices on which the integrate circuits are printed, called wafers. The same tricks that work in music work in literature. You are expecting a repetition or returning to the tonal, but instead the melody does an appoggiatura.

Is it intentional that the first use doesn't have the -thin? Is the author that sneaky clever? I don't know. Maybe.

Of course, being a literary work and being the two interpretations not contradictory to each other, it is perfectly possible that the intention could be to express both meanings simultaneously. There is no need for the reader to make an exclusive choice between the two.

The author confirmed, though, that

I must disagree with the other answers and comments which say wafer is a synecdoche referring to the substrate microchips are cut from. The term may have been chosen here because it is reminiscent of high technology, but I wouldn't think the intent was to evoke a physical comparison. Silicon wafers are a manufacturing precursor, not a finished good; there aren't any wafers inside your computer. They are moreover a precursor to only one component of the larger whole, and knowledge of their very existence is anyway not widely held outside of those working or interested in computer hardware.

I would no sooner refer to a computer as a wafer on account of its chip as I would call a car an ingot on account of its metal body. This goes especially because the quote says it is a wafer of stainless steel, whereas chip wafers are silicon, making this perhaps akin to calling a car a cowhide.

Wafer is more likely a reference to the computer being thin/flat, light, and stiff, as in the common expression wafer-thin. The OED notes that this sense is commonly ascribed to comparison to the sealing wafer, a gelatin or gum disc used for sealing envelopes, but actually originated in the thin, light, crisp bread whose name shares an origin with waffle and the now-obsolete wafron. 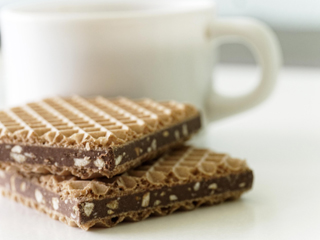 It might also be round, like communion wafers (a flat bread manufactured for use in Christian rituals), wafer seals (the transparent plastic adhesive tabs applied to retail packaging), or other kinds of wafers. The Dutch wafel (whence stroopwafel) is cognate. 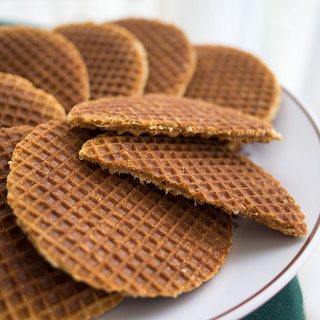 I think any reference to shape is seconary, however. If one imagines a typical desktop computer in an office as being a block of plastic or aluminum, it need only be very thin or flat to seem like a piece of futuristic wizardry.

Wafer, in this context, refers to the "wafer" that is used as the substrate for computer chips. See these references
https://en.wikipedia.org/wiki/Wafer_(electronics)
https://www.britannica.com/technology/computer-chip

2
What is the word for a person who causes disruptions in electronic equipment?
1
Another phrase for "wear and tear inspection" of tools and equipment report
4
Word for discrimination based on handedness
1
Is there a -phile suffixed word for love of devices/tools/equipment?
1
Discrimination based on race and gender
3
Single Word Request: Relationship based on context
1
Word for using extra line breaks to improve readability
1
Weather based malingering
0
Color-based antonym of "blues"?