Why do we spell the word “who” with a silent “w” when it isn’t needed?

If we spelled who without the W – making it ho like with do and to — it could still make sense, so why is there a silent W in the word who?

The spelling "who" was originally used simply because, in past time periods, this word was pronounced with a "wh" sound. To be clear, by "a "wh" sound" I mean a sound that is different from either "w" or "h" on its own. Although many varieties of English have lost "wh" as a distinct sound, replacing it with plain [w], the digraph "wh" used to (and in some accents still does) have a value that can be transcribed as /hw/, or written with the special symbol [ʍ] if we interpret it as a single sound.

Many aspects of modern English spelling derive from Middle English pronunciation. Analogy with the spelling of other words probably contributed to the continued use of "wh" in spelling even after people started pronouncing the word with a simple /h/ sound. "Who" is one of the many question words starting with wh- in English.

Here is a brief explanation of why who lost its /w/ sound. The sound [w] is made by rounding the lips. The pronunciation of the word "who" evolved over time to have a rounded vowel sound, and the presence of a rounded vowel sound caused people to stop hearing a separate rounded consonant at the start of the word. This has happened in other words, most obviously two.

The question word how lost its /w/ sound for a similar reason, but much earlier, so it has a spelling without "wh".

Unfortunately, irregular spellings in English aren't always etymological. Because of the confusion between "h" and "wh" before rounded vowels, a few words pronounced with a simple /h/ sound are spelled with "wh" before "o" even though, from an etymological perspective, they would be expected to just have "ho". An example is whole, which is etymologically related to heal.

A few blog posts that relate to topics brought up in the comments:

One of the oldest surviving works in any form of English is Beowulf. Here is the first page of the manuscript: 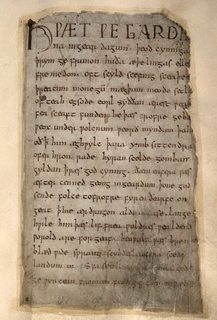 The first line is:

which in more modern letters is:

The first word is "hwæt", which is related to the modern "what" and would have been pronounced "hwat" (to rhyme with "at"). In Middle English, we switched the "h" and "w" around in our spelling, although many speakers continued to pronounce the initial /h/ well into the 20th century.

"Who" is one of the "six Ws" question words:

From [...] Old English hwā [...] Spelling change hw > wh in Middle English (without sound change in initial consonant cluster), while sound change /hw/ > /h/ due to wh-cluster reduction after a bizarre instance of three consecutive vowel shifts of /aː/ to /ɔː/ to /oː/ in Middle English and further to /uː/ in Early Modern English (although only the shift from /ɔː/ to /oː/ is unusual). Compare how, which underwent this change earlier (in Old English), and thus is spelt h.

Why is the W silent in the word Who?

It's a long story (as @chaslyfromUK points out, it comes from a PIE root, which means it's been around on people's lips for over 4000 years), but the short of it is that Germanic languages like English changed /kʷ/ in PIE words to /hʷ/ or /xʷ/. English words beginning with WH, which used to be spelled HW, also used to be pronounced with much more friction than today -- like CH, the ach-Laut, the sound in the German word ach. English words like whale and wail did not start with the same consonant sound then -- today, for most Americans and some UK English speakers, they do.

The H part of the English WH words went away in most cases, like where, when, why, whether, which, what, whence, and whither; that was part of the change from Middle to Modern English. The old /x/ sounds that were allophones of /h/ went silent; they were spelled GH and our Middle English spelling system keeps them for luck or something.

In the cases of how and who, however, it was the W part of WH that went away. These two Middle English words contained back rounded vowels /u:/ in how and /o:/ in who, and if you've ever tried to pronounce words like woo or woad carefully you know that it's very hard to make the W part distinctive. This is because the sound /w/ is made simply by rounding the lips tightly, and they are already tightly rounded in making the vowels /u:/ and /o:/.

A consonant that can't be heard is often not written, and after a while nobody bothers.
That's all, really.

There is no point in trying to make sense of English spelling. The reasons are often lost in history. English has undergone many transformations. Here is probably the best explanation you will get.

Not the answer you're looking for? Browse other questions tagged pronunciation orthography silent-letters or ask your own question.