How old is the word “upskirting”?

In the comments section of this question the subject derailed slightly: is the word upskirting dependent on today's technology or is it older?

The word upskirt to refer to photographs taken up women's skirts was coined no later than 1995.

In what they describe as a growing trend, police are beginning to catch video voyeurs trying to shoot private parts in public places. These men are aiming the latest compact camcorders up women’s skirts in crowded stores and shopping malls, parks and fairs - and often posting the pictures on the Internet.

What began as a small photo gallery on the Internet a couple of years ago has rapidly expanded to more than 40 such “Upskirt” sites. . . 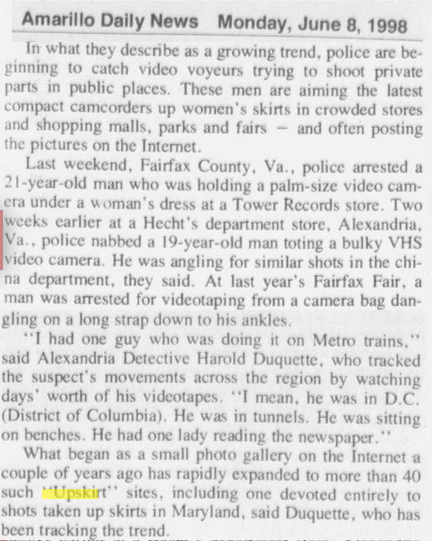 The first example of upskirting quoted by the OED is from 1998. And it would appear that it does not predate digital photography.

The habit or practice of taking upskirt photographs or videos. See upskirt adj. and n.

1998 Re: Lets start Interesting Post in alt.native (Usenet newsgroup) 12 Sept. Thus begins the fine distinctions of ‘privacy’ rights in public places, of which the issue of ‘upskirting’ is just one.

2005 West Australian (Perth) (Nexis) 17 Feb. 38 He would hide the camera inside a backpack..and..film up his victims' skirts (known as upskirting).

2012 C. Quigley & D. Pollock What on Earth are you Wearing? (new ed.) 97/1 When my mum was at school, they wouldn't let the boys wear patent-leather shoes because they thought they would use them to look up girls' skirts. I guess this was the beta version of upskirting.

The term upskirt appears to have been used as early as in June 1998:

“A video, usually taken in a crowded location such as a shopping mall, that is shot up a woman’s skirt” without the woman’s permission or even knowledge. (Source: Word Spy)

Urban Dictionary’s earliest entry for upskirting is from 2006, but Word Spy found a 1998 mention in the Washington Post:

The word is ~ 20 years old. The practice? Since Adam and Eve were evicted from the garden! Small cameras etc (digital) have facilitated such. I suspect though the practice of 'photographing' occurred back in the 8mm and flash photography days.

The earliest use I can find of upskirt in a related sense is in Jack van Niftrik's 1980 novel Where Rumour Never Reaches:

He experienced the contrasting sensations of sorrow at the plight of the Nongamas, the Bikos and the Molefes of the world and a flash of sexual desire by a breathtaking upskirt glimpse of honeyed thighs and white triangle of underwear.

Of course, English speakers verb adjectives and nouns all the time, whether directly or to form a gerund form like upskirting, so as long as we can find the adjective upskirt as something deliberately sought (rather than the accidental glimpse van Niftrik's novel describes) we can expect it. The OED has both adjective and noun forms of upskirt attested in 1994.

To conjecture about how far back it may go we can ask how far back we could reasonably expect to find upskirting. Pornographic pictures showing a view up a skirt exist from the early days of photography, (and in painting Fragonad's Les Hasards heureux de l'escarpolette shows a man enjoying such a view, without sharing it with the painting's audience, as far back as ca 1767 while Marilyn Monroe's famous revealing moment in The Seven Year Itch in 1955 was not the earliest in moving pictures by a large measure) but since the gerund form generally refers to deliberately surreptitious pictures taken without consent, the phenomenon of upskirting really depended reasonably fast film and either on the telephoto lens, or small "spy" cameras, so really not much earlier than the 1980s as something that wouldn't need remarkably exotic equipment. (Ubiquitous mobile phone cameras of course make it much easier today).

One only needs terms when discussing something though, which means not just someone actively taking such photographs, but a community of people sharing them and discussing the taking of them. That doesn't really seem to have predated Usenet in any large-scale and continuous manner, so we could take 1980, being the time that it first became possible to share binary files such as photographs on Usenet, as the earliest it could possibly go back to. Realistically we're probably talking about the late 80s or early 90s, but almost certainly no earlier than 1980, and clearly by the time of the first OED attested use in 1998.

Not the answer you're looking for? Browse other questions tagged etymology technology or ask your own question.

6
What's that word to describe “technology becoming invisible over time”?
2
Is there an original etymology for “Xenomorph” outside of the origin in the movies?
4
Origin of the Old English word, 'blithe'
2
The process by which a word enters language
1
What is the etymology of the word freedom?
2
What is a term for “modern” technology that doesn't imply up-to-date?
3
Do people still use the word “program” as a noun?