What does “Commander-in-Soy” versus “alpha” mean?

I came across a phrase I’m totally unfamiliar with – “Commander-in–Soy” in the following paragraph in the article:

“Some is the key word here, however. While Mike Cernovich, a far-right online personality, tweeted that Trump was now the “Commander-in Soy” and that Pelosi was “alpha,” others rallied around the President.

Apparently the word, “Commander-in-Soy” seems to be used in negative or derogatory nuance vis-à-vis “alpha” for Nancy Pelosi, but I’m not able to relate soy to Commander-in-Chief.

Both online Oxford and Cambridge Dictionary I’ve checked provide definition of soy no more than:

And I don’t see any headings of “Commander-in Soy” on google search.

"Alpha," I know what it means. But What does "Soy" here mean?

Can the word, “soy” be acceptably used in such a way as “Commander-in–Soy,” or “Someone who's a kind of Soy.”?

The usage is Commander-in-Soy, which is a play on words on the president's role as Commander-in-Chief of the U.S. Armed Forces. Note that Soy is capitalized in this usage. 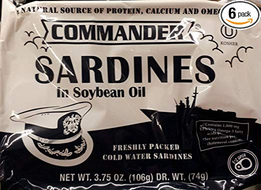 It means that Trump displayed weak, "feminine" characteristics by backing down on his pledge not to end the shutdown without wall funding.

Soy is thought by some, perhaps more on the right side of the US political spectrum, to cause "male breasts" and other feminine characters.

See articles such as Can Soy Feminize a Boy?

Is This the Most Dangerous Food For Men? There may be a hidden dark side to soy, one that has the power to undermine everything it means to be male

Alpha refers to being the alpha male or leader of a pack, and this role has been given to Ms Pelosi, who led the Democratic Party opposition to the continued shutdown. This represents another "role reversal" as far as gender is concerned.

Not the answer you're looking for? Browse other questions tagged meaning phrases politics cultural-phrases or ask your own question.

3
Is it a common way to use “heartland” as in “give a heartland shout-out / comment to somebody”?
3
Is “Something in the sand” a popular English phrase?
4
Does “walk back” have a meaning of ‘deny’ or 'keep distance from somebody / something.' as an idiom?
3
What does “blink” in “G.O.P. blinks in standoff” mean?
3
what does “line ministries” mean?
3
What does “triple down” in “Trump triples down on George W. Bush’s responsibility for 9/11”mean?
13
What does Donald Trump’s “go-to argument” mean?
1
Why does “the one” pass as the moniker of President Obama? What does it mean?
16
Is “snitty” a popular American English term? What is its origin?