The following rule (or 'rule', this being English) is sometimes quoted:

If a word has two or more syllables, double the final consonant when adding a suffix if and only if the final syllable is stressed in speech.

So for example we have

By that logic, we should have

The trouble is, that's mostly not what people actually do; see the google books Ngram, below. Moreover, Wiktionary says that it is histogrammed/histogramming (here) .

Unfortunately, the major dictionaries do not list histogram as a verb; in particular, the OED doesn't. But in the sciences, people do use it—both with the doubling of the m (here) and without (here). However, the double-m version is 10-20 times more common, according to this google books Ngram: 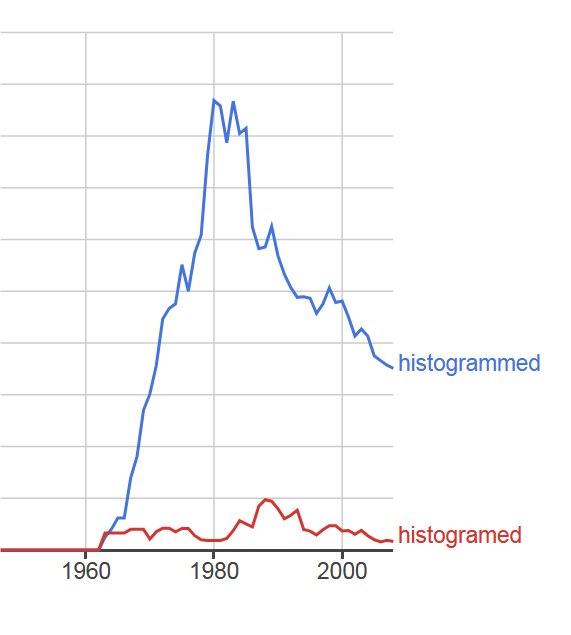 (A very similar Ngram is obtained for histogramming,histograming.)

The Free Dictionary has the following discussion:

Note that there are several words that have primary emphasis on the first syllable but have doubled consonants when taking vowel suffixes. Most of these have a secondary stress on the last syllable, which might be part of the reason why their final consonants are doubled, but this is not always the case.

The situation is made more difficult by the fact that many of these words have variant or accepted alternative spellings in which the final consonant isn’t doubled, and the preference for some of these variants often comes down to regional dialect. This leads to confusing spelling decisions such as kidnaped vs. kidnapped and worshiped vs. worshipped. Unfortunately, we just have to memorize these exceptions:

Consonant doubling can occur before the verb inflectional suffix -ed even when the verb does not have a primary stress on the last syllable of its base form. There isn't really any simple rule for when this happens. You can see some attempts at formulating more complicated rules in Alex B.'s and Patricia M's answers to the following question: "Focussed" or "focused"? Rules for doubling the last consonant when adding -ed

The spelling histogrammed is likely based at least in part on analogy with the more frequent word programmed. There was a previous question about the forms of that verb: “Programming” versus “programing”: which is preferred? I use -mm- spellings for these words and also for diagrammed and anagrammed.

The use of double consonant spellings for -gram verbs is probably related to their pronunciation, and possibly to their etymology.

I think the quotation from The Free Dictionary confuses different kinds of examples that would be better dealt with separately. The rules for doubling consonants before the inflectional suffixes -ed and -ing shouldn't be expected to govern the use of doubled consonants in all other kinds of words. In Latinate words, double consonants occur fairly often after unstressed vowels, usually for etymological reasons.

The double -ll- in crystalline and crystallize is probably related to etymology: -ize is a suffix that doesn't only attach to English words, but also to bound Latinate roots (e.g. anglicize). I wrote an answer to a question about the spelling alternation between -our and -or- in words like vapour, vaporise that talks about the general principles for spelling words ending in the suffix -ize (-ise).

Not the answer you're looking for? Browse other questions tagged orthography doubled-consonants or ask your own question.

45
"Focussed" or "focused"? Rules for doubling the last consonant when adding -ed
37
“Programming” versus “programing”: which is preferred?
17
Is "vapourise" considered incorrect, even in British English?
15
"Cancellation", "Canceled", "Canceling" — US usage
10
Why is it "loggable" rather than "logable"?
4
Why do we write "fixing" instead of "fixxing"?

8
How did the "double consonant to shorten vowel" thing come about? ("furry" vs. "fury")
2
Is it spelled "propeling" or "propelling" in American English?
2
Double Consonants in Gerund
11
Why is the 'L' in detailed not doubled?
4
Australian English: developed or developped?
8
Two 'x's in "anti-vaxxer"