How to count "Chinese yam"

I am not sure if most westerners have seen or eaten this food. Here is a picture of Chinese yam: 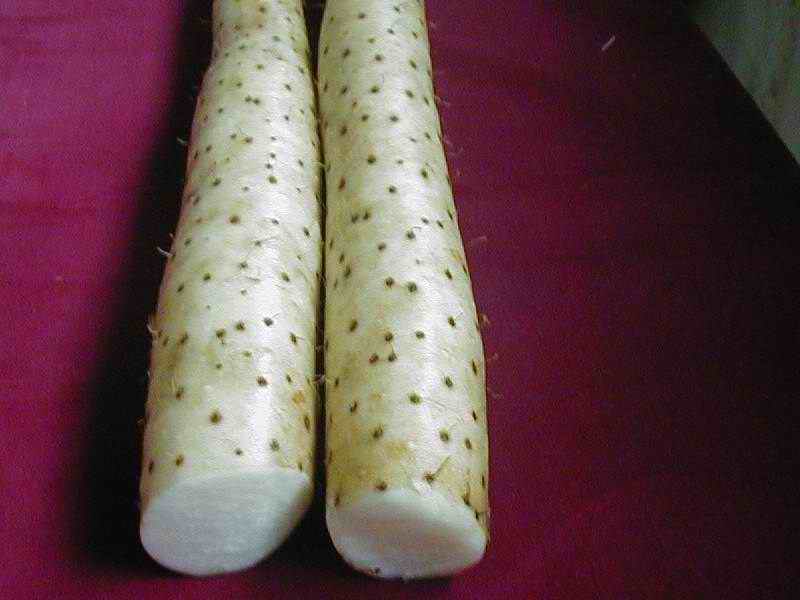 As you can see in the picture, there are two sticks, but I am not sure if stick is a correct quantifier for Chinese yam. Which is the right one to go with it?

In general most food is both countable and uncountable. It is countable when you refer to it in its intact form that you normally find it in.

Take two carrots and chop them

This means to take two whole carrots, as they are when pulled from the earth, and chop them. (Presumably you wash and peel them first, etc).

This soup has too much carrot in it.

This means that the soup contains too much carrot mass, that is, too many carrots were chopped for this soup (or, perhaps, the carrots were too large). So a whole carrot root, as pulled from the ground, is "one carrot", but it is made up of "carrot".

The same applies to many other food types. It gets complicated when a food doesn't have a standard unit, such as beef. You can't really say "two beefs" because nobody knows what that means. Two pounds? Two rib-eye steaks? You need some kind of measuring unit.

For celery, which is normally sold as a bunch of stalks, you have to say "two stalks/sticks of celery". For liquids you'd have to specify the measuring quantity, such as "two cups" or "two bottles" or "two tablespoons". Certain liquids might have a relatively standard serving size, or the serving size might not always matter, so you could hear

Give me two beers, please

which implies "Give me two beers in whatever normal serving size you use, be it bottles or cans or pint-glasses"

To get to the point for the vegetable in question, since it is probably sold as individual tubers, I'd assume that if you said "2 Chinese yams" then people would understand that as "2 Chinese yam tubers". It probably isn't necessary to say "tubers" and that would likely sound odd. I've never heard anyone say "Use two carrot roots".

Most root vegetables are used alone: 2 radishes, 2 carrots, 2 parsnips, 2 potatoes, 2 sweet potatoes, 2 onions, 2 rutabagas, 2 beets, 2 yams. There are some for which you would use an additional word: 2 sticks of celery, 2 ears of corn, 2 heads of garlic, 2 pieces of fruit. There are probably other examples, but I think it sounds best to have it without the word "stick".

Not the answer you're looking for? Browse other questions tagged word-choice grammatical-number countable-nouns or ask your own question.

6
About using singular as food

13
How to refer to the "elevated areas" of a mountain?
1
"Context Cue", or "Context Clue"
21
Americans can eat Chinese, but Chinese can't eat Americans?
1
What do you call this (these) writing "fallacies"
2
Mixing countability; how to correctly say "there is plenty of rice, earthquakes and typhoons"?
1
What is the correct way to say One and Two-sided Limits?
10
A word/phrase means "a small amount" (of a color)