Why do we say “acid rain” and not “acidic rain”?

The term "acid rain" refers to rainwater that are more acidic than regular rainwater. So if acidity is a property of the water, why do we say 'acid' and not 'acidic'?

We say acid rain, an open compound, rather than acidic rain, a common noun modified by an adjective, because of this: 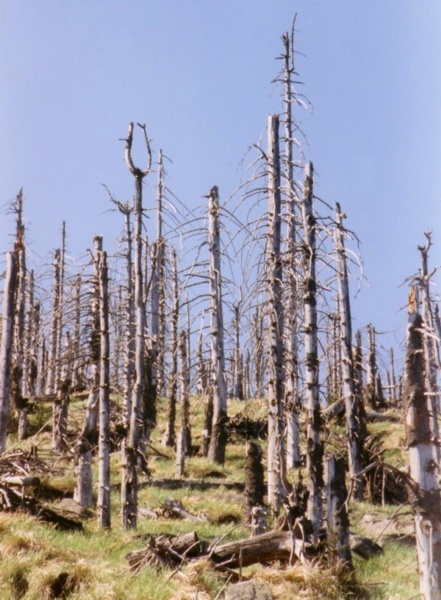 This used to be a conifer forest in the Erzgebirge (Ore Mountains) spanning Germany and the now Czech Republic, killed off by what scientists call acid deposition, when various air pollutants combine with rain to form sulfuric and nitric/nitrous acid solutions. The popular name in English for this phenomenon is acid rain.

Because of CO2 going into solution, all rainwater is slightly acidic, so merely saying acidic rain is somewhat of a tautology, though something like “hyperacidic rain” would not be. The term acid rain, however, is now generally restricted to the pollution-caused variety deadly to plant life. This usage is not a new one:

From Mount Vesuvius there recently came a great quantity of vapor which was saturated with chlorohydric acid… The vapor, it appears, became condensed and fell in the form of acid rain, which speedily burned all the vegetation on which it fell. — Herald Democrat (Leadville CO), 3 Aug. 1902.

This would suggest parsing the open compound as acid (n.) (in the form of) rain (n.) rather than an adjective + noun.

Here is a partial answer.

I would interpret the acid in acid rain as an adjective, not as an attributive noun.

The word acid is both an adjective and a noun. From an etymological perspective, the adjective usage is actually primary: it comes from a Latin word acidus/acida/acidum that had an adjective suffix -idus/-ida/-idum. (Consider that acid is the base of the -ity noun acidity; we don't say *acidicity).

The OED's first citation for the derived adjective "acidic" is from 1868. "Acidic" seems to have been formed within English, and first used in rather technical contexts such as geology and chemistry.

The OED's first citation for "acid rain" is from 1845, but the Google Ngram Viewer indicates that the use of "acid rain" increased the most in a time period starting around the 1970s, when "acidic" was already a relatively frequent word.

It's not obvious to me why people didn't get into the habit of saying "acidic rain" instead. I would guess that "acid rain" became a fixed expression relatively quickly, so the establishment of "acid rain" instead of "acidic rain" might be based on the usage of a few influential early sources. But that's just my speculation; I don't actually know the relevant history. The Wikipedia article on acid rain says "The term "acid rain" was coined in 1872 by Robert Angus Smith"; even though, as mentioned above, the term actually seems to have been used before 1872, Smith does seems to have been a fairly prominent early source that talked about acid rain.

There was a previous question on this site about the difference between the adjectives "acid" and "acidic", but it doesn't seem to have gotten any very detailed answers.

Acidic (an adjective) v. Acid Rain: I do not know of a reason. The etymology points to first usage as acid rain, and it just likely persisted.

We can argue about parts of speech but the difference in meaning is of overriding importance. Acidic refers to its current pH and is only partially related to how much acid it contains. Further, some acids have more of an effect on the atmosphere than others, and in this context, acid clearly refers to those acids which have a significant long-term effect.

For example, all rain is acidic because it contains CO2 from the atmosphere but this makes no contribution to acid rain.

An extreme example is orange juice. This is quite acidic but the citric acid in it decomposes. It makes your urine more basic (opposite of acidic) as sodium remains after the acid had gone. If you sprayed this on the the clouds they would produce acidic rain but as the citric acid would not last long it would not make acid rain. Rather it would neutralize it.

Not the answer you're looking for? Browse other questions tagged adjectives attributive-nouns or ask your own question.