Is “Lend a cachet” popular phrase?

I found the phrase “lend a cachet” in the following sentence of the New York Times’ (November 11) article, titled “Picking brand names in China is a business itself”:

“For some products, having a foreign-sounding name lends a cachet that a true Chinese name would lack. Many upscale brands like Cadillac (Ka di la ke), or Hilton (Xi er dun), employ phonetic translations that mean nothing in Chinese. Rolls-Royce (Laosi-Laisi) includes two Chinese characters for “labor” and “plants” that more or less have become standard usage in foreign names - all to achieve a distinct foreign look and sound. “

I understand “lend a cachet” implies “give prestige, or add prestigious image” from the context of the above statement.

I checked both Cambridge and Merriam-Webster online dictionaries to find neither of them registers “lend a cachet.”

On Google, I found the following examples of the phrase in use.

From the above, I realized “lend a cachet” is a simple combination of “lend” and “cachet,” not an idiom that I first conceived. However, is “lend a cachet” frequently used phrasing as opposed to other plain expressions, say “give prestige or “add a fashionable (Western) image”? 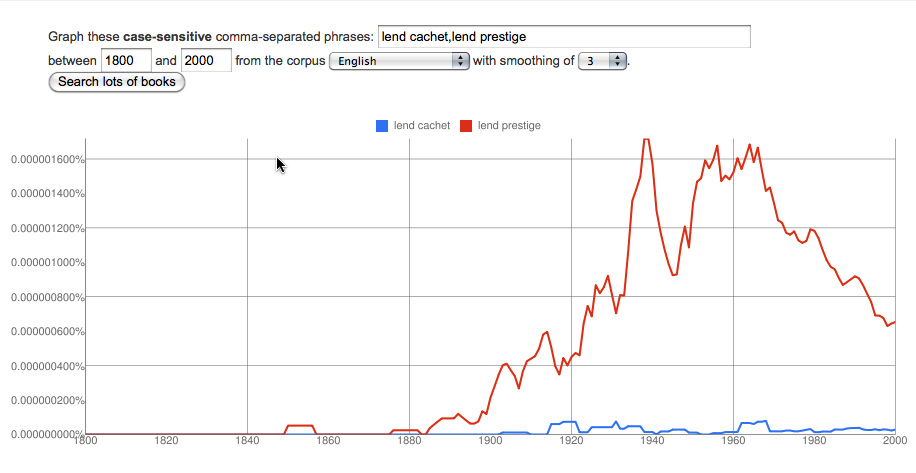 So I wouldn't say "lend [a] cachet" is a popular phrasing, although it's probably one that I would use (such as in the example from MW Unabridged: "Being a guard gave you a certain cachet.")