Has the meaning of the English colour name “pink” changed since the early 1900s?

This question was inspired by this one from skeptics.se, about the use of pink and blue clothing to denote the sex of babies. In noting cultures which have the reverse arrangement (i.e. some sort of anti-blue for boys) many examples actually seem to be that language's word for fairly saturated reds, rather than the very pastel shades we mean by modern English "pink."

I was already aware that traditional English hunting coats are called "pinks" even though they are actually scarlet. This set me to wondering if the meaning of the colour name may have changed over time, gradually becoming less saturated?

What I have found so far:

All of which has been very interesting, but not arrived at an answer to my question: when newspapers of the 1890s—1920s refer to dressing newborn boys in pink, what colour did they mean by "pink"?

a. Brief aside on the chemistry of dyes: the fact that a dye is a "lake" is unrelated to its colour. It is related only to the method of binding the pigment to the cloth. Both saturated and pastel shades may be lakes.

I surmise that the color pink refers to the same family of pale reddish colors today as it did during the specified period. The dictionaries seem relatively consistent throughout that time, and the things that would have been described as pink are more or less the same to my knowledge.

What the Dictionaries Suggest

Johnson defines the color as "a color used by painters". Webster reiterrates this sentiment, but prefaces it with an express claim that the color is named for the flower. The Century Dictionary and Cyclopedia notes that pink has high luminosity but low chrominance, suggesting a color that is more white than red. Webster's Revised Unabridged Dictionary reaffirms that it was named for the flower, and explains that it is a pure mixture of red with varying degrees of white. Regarding the non-red pink pigment variants, the C.D.C. acknowledged those terms, but pink by itself is still defined as a type of red.

There is a slight discrepancy in that the 1913 dictionary references a pure mixture of red and white, whereas the C.D.C. suggests a somewhat bluer hue by making reference to purple (which is a mixture of red and blue). However, I think that has moreso to do with:

Oranges are perhaps the best example of that second point, since sometimes the peels can tend more towards a yellowy orange, or a reddish orange, also depending on growing conditions. The May 24 2012 article When an Orange Isn't Orange, written by Stephen Stockwell for the Australian Broadcasting Corporation reports on how oranges from Carnavon are pale due to the warmer climate, and have a harder time finding their way into stores as a result. Despite the article's name, the oranges shown within it are orange, although they are trending towards lemon yellow.

Based on the information from these books, I assume that no semantic shift occurred during the period from the 18th century through to the early 20th, and if that assumption is correct then all I need to do is bridge the early 20th century definition to the understanding of the word we have today. The same sort of variance exists today, as you can see from the Crayola Pretty Pink crayon box, which contains an assorted variety of pink crayons: 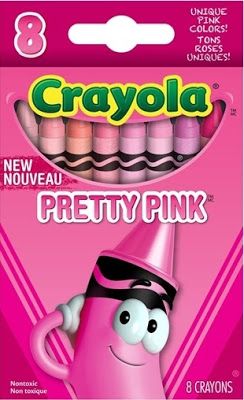 If the color name is derived from the flower, this might not be at odds with the flower based definition, since as you mentioned, the flowers vary in color somewhat.

The American Heritage Dictionary, 5th edition (©2016) and Merriam Webster's Collegiate Dictionary 11th edition both claim it is a high chrominance and low luminosity. Merriam-Webster adds that it ranges from bluish to pure red. Other contemporary dictionaries, like the Shorter Oxford English Dictionary 5th edition seem to define it as a pale red color, which suggests some whiteness. The Shorter Oxford English Dictionary also suggests that the flowers are pink or white in color.

Since it is important to know the color of these flowers, here is a shrunken picture of some Dianthus Plumarius made by Ecelan of Wikimedia Commons, which is licensed under a CC-BY-SA 3.0 license. 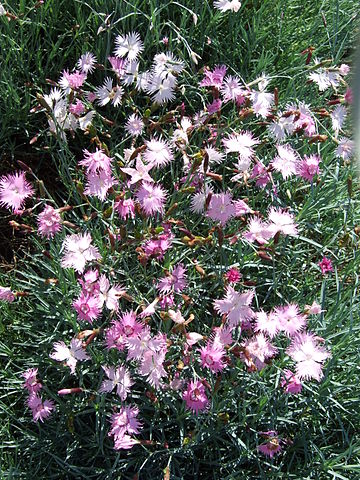 There is only so much the dictionaries can do to help by themselves though, and especially so when semantic drift is involved. Relative values are subjective, and colors are among that category of thing that you really have to learn through observational instruction.

So my first thought is to cross-reference concrete nouns that would, in all likelihood, represent our understanding of pink today. Most of what I can find demonstrates that our current understanding of the word pink, as a general color, is at least the same as it was in the late 19th century.

Page 68 of the Ohio Journal of Dental Science, Volume 8 (1888), published by the Ransom and Randolph Company demonstrates that the gumline and rubber was considered pink back then:

Dear Doctor Haskell:— Your article on "Mineral Teeth" in the Janurary number of the Ohio Journal leads me to ask a few questions. First, what kind of pink rubber do you use in your practice for forming gums? How do you flask and finish and how do you manage to preserve or restore the color of the pink gums?

The Google ngrams library about ten unique instances where the words pink and pig are used together before the 19th century ends, starting in 1842. Pink pigs are strangely absent before then, and we don't really see any unambiguous instances until 1884 though, in Gibson's Law Notes, Volume 3, part 5 (May 1884) on page 129.

The other method is to see if we can see what a pink pigmant would have looked like during or before the 19th century, and see if it would be considered pink today. Unfortunately, I doubt I shall simply just stumble across a can of pink paint from the 19th century, but instructional texts should tell us how pink was artificially created, allowing us to recreate the appropriate color using the methods of the past today.

The best part is that the hard part has been done for me! A Manual of 18th Century Textile Dyeing by John Edmonds (2014) is imensively helpful, because Mr. Edmonds already did it for me. Plate 11 shows us what pink dye on silk and saffron yellow looks like. 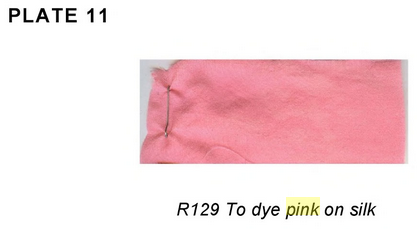 That is undeniably pink, and the recipe dates back to A Practical Treatise on Dying Woolen, Cotton, and Silk by William Partridge, which was published in 1823 according to Mr. Edmonds.

Granted, that means he put the wrong century in the title of his book, but mistaking a century for the century prior is an easy mistake to make due to how the calendar dates are written. This is perhaps the most relevant proof, since dyed silk like this would be a material quite likely to be used to make fine garments.

Note that the relevant recipe, which is to dye pink on silk and found on page 144 of a 1834 printing of William Partridge's book, calls for cochineal. Cochineal are bugs that are often ground up to make red food dye, which may be called carmine by F.D.A. regulations. I mostly just mention this to verify that the above color is the intended result, although it is worth noting that strawberry flavored dairy products like Yoplait yogurt often end up pink when Carmine is used to color the white milk based product.

An English-French dictionary circa 1850 translates pink into French as rose, which is what the French call the color pink.

So unless both the French word "rose" and the English word "pink" changed which colors they meant, the color pink has not changed substantially since 1850.

I can't find any French-English dictionaries which contain pink in Google books before 1850, and Google Ngrams seems to show that using pink as a color name was fairly rare before 1840.

Fox hunters have called their scarlet coats pink at least since 1791, according to the OED. I'm not going to speculate why; Wikipedia says that nobody knows for sure.

But note that the scarlet fox-hunting coats started being called pink well before the word pink became popular as a color name, and the color of the flower called pink varies quite a bit.

Not the answer you're looking for? Browse other questions tagged historical-change or ask your own question.

2
The origin of the word “Pink”

5
What happened around 1700 that transformed / changed the English language?
8
How has the meaning of “politically correct” changed?
4
What is the term for a word which has the meaning changed to its opposite?
0
What is a better word for 'condescending' (whose meaning has changed)?