Is the word gothic wrong/arbitrary in "Raygun Gothic"

According to wikipedia, Raygun Gothic is a catchall phrase for mid-20th Century futurist design. I don't use this term because it doesn't seem accurate in the context of art movements. Personally, I would not use the word "raygun" at all, instead I would use "rocket" as that is the actual influence at the dawn of the space age, specifically: aerodynamic shapes and rocket fins.

But my real quibble is "gothic" since that is a very specific historic style which doesn't resemble mid-century retro-futurism in the least. Nevertheless, I see this term used often in sci-fi discussion groups and the general (non-art history) public seems to recognize it.

I'm not claiming everyone should stop saying it – if the general public knows what it means then it's doing its job as the name of a style, but is "gothic" just an arbitrary word being used to make it sound more like an "official" art movement?

I'm confused because of the painting "American Gothic", which is maybe using "gothic" in the same way as a "catchall" phrase (or maybe there is something in the painting that is actually gothic in style, I have never been sure). I'm asking here because my problem is not about defining the style or discussing art, it is the use of the word "gothic" in this context.

First off, a qualification: as this amounts to guessing what was in a particular person's mind when they coined a phrase, this answer is somewhat speculative.

Outside of cathedrals, gothic isn't a straightforward word at all.

Take typography: a fairly limited and, ultimately, a practical field. Here, gothic has probably been stretched to breaking point in terms of what it can encompass.

It can be used to refer to blackletter, a traditional European style often used in English to imply times past (think: ye olde Shoppe) and to evoke authority (for example, in newspaper mastheads). Despite its longstanding tradition in German-speaking countries, blackletter was condemned by the Nazis in 1941 ("Jewish letters," apparently), having been in very common use in Germany up until then, and even the usual body type in German books.

However, gothic is also used to refer to sans serif typefaces, which are geometric and unadorned in their reductionism, quite unlike ornate blackletter hands. These sans serif typefaces, in particular the more stylised geometric fonts, were favoured by advocates of the modernist Bauhaus movement. However, once again, this very different flavour of gothic type did not meet with National Socialist favour ('cultural Bolshevism' this time, apparently):

While both these styles are legitimately called gothic, as you can see, blackletter and sans serif are almost polar opposites, inasmuch as such a thing is possible in an aesthetic field.

Raygun gothic is geometric in its influences, and owes more to art deco than anything - not surprising as the two emerge contemporaneously. (The Chrysler Building was finished in 1930, two years after Buck Rogers and four years before Flash Gordon appeared on the scene.) Sans serif faces were also in vogue and rising in importance when art deco took over in the 1930s; as has been previously noted, these typefaces are also called gothic. In the 1930s and the 1950s sans serif faces and raygun gothic both saw prominence.

The same Wikipedia article you reference states that William Gibson, the science fiction author, was the originator of the term raygun gothic in a story called The Gernsback Continuum:

Cohen introduced us and explained that Dialta [a noted pop-art historian] was the prime mover behind the latest Barris-Watford project, an illustrated history of what she called "American Streamlined Modern." Cohen called it "raygun Gothic."

(I've searched for comment by Gibson into his thinking here, or even authoritative comment - I can find nothing.)

To go back into typographical and graphic design history, the International Typographic Style came together in the 1920s, rose in the '30s and crystallised in form in the 1950s, with Univers and Helvetica being perhaps the two most notable typefaces of the time (and still now). Akzidenz Grotesk, Helvetica's granddaddy, is somewhat earlier, but the motivation behind its design is the same:

In 1896 the Berthold Type Foundry released its Akzidenz Grotesk Typeface in an attempt to capture an objective style, and from that point the International Typographic style evolved as a modernist graphic movement that sought to convey messages clearly and in a universally straightforward manner.3

(Emphasis in the quote is mine.)

Note also that in German, grotesk can mean both grotesque and sans serif, not unlike gothic in English - one need only think of a gargoyle to see the overlap. Indeed, the origin of gothic as an architectural term is as a sweeping insult applied by renaissance Italians to the grosser medieval styles of northern Europe.4

I'd suspect that this is what Gibson had in mind in his use of the term, or perhaps it served as a hook to hang it on... along with a very large measure of what you yourself said - making it sound like an 'official' art movement. Much in the same way, there isn't much punk about steampunk or dieselpunk, and it doesn't particularly matter. (Incidentally, the alternative names rocketpunk5 and atompunk6 are also used for raygun gothic.) 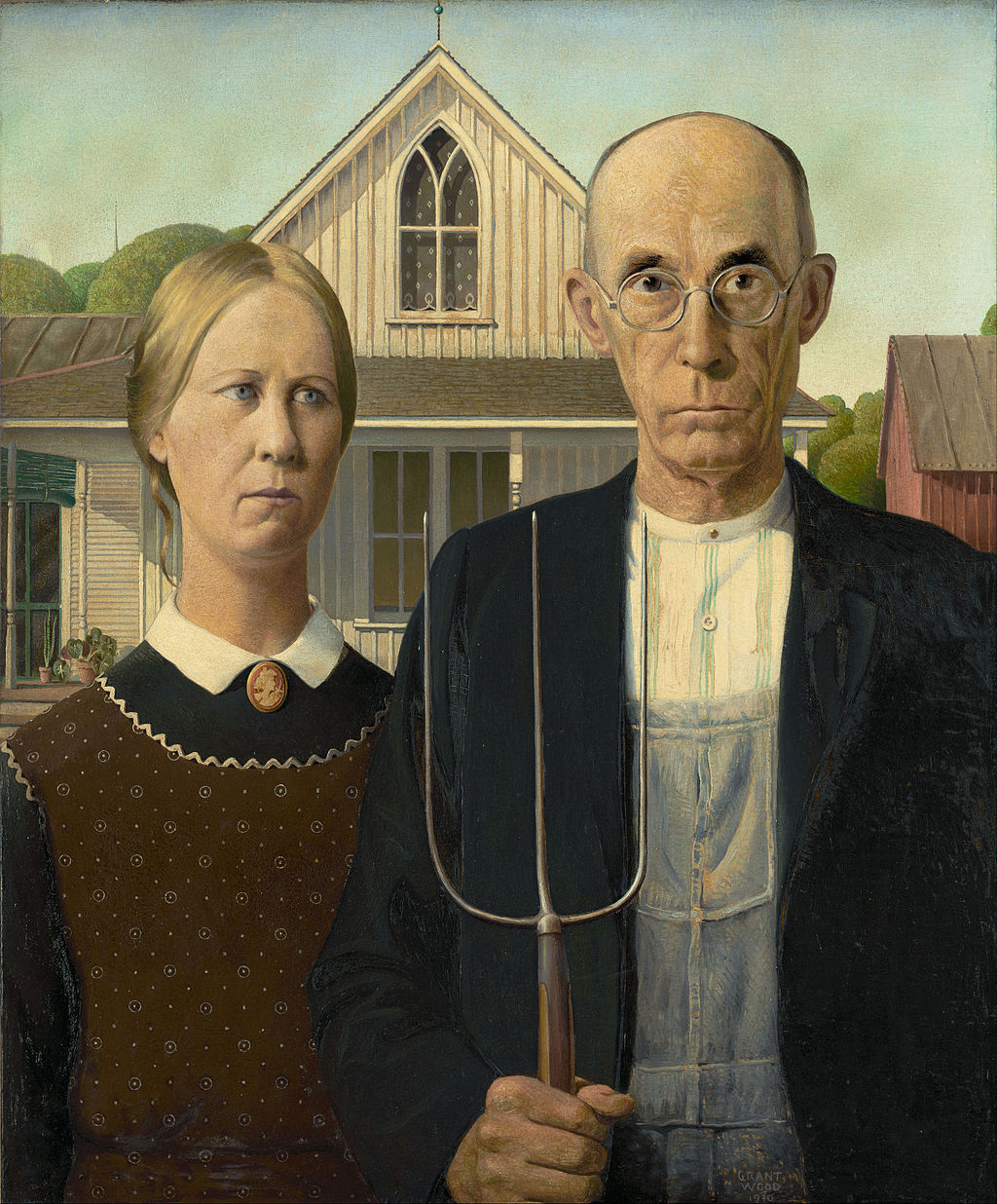 More by the way than anything, in American Gothic there is a rather incongruous gothic window in the house behind on the upper floor - gothic in the proper medieval sense, here (or, perhaps more accurately, gothic revival). The juxtaposition of the light wood-framed house and the weighty pretension of the gothic window set in it amused Grant Wood, the artist, and he painted the house, along with some suitable residents for it in the foreground.8

In this instance, at least, gothic is used in the 'proper' limited architectural and art history sense, and not as a catch-all, as you suggest.

The title of the 1930 Grant Wood painting references the Gothic window prominent in the background, which along with the board and batten siding is just enough for the humble structure to be in the Carpenter Gothic style. Wood was fascinated by the house, not because he thought it beautiful, but because he “thought it a form of borrowed pretentiousness, a structural absurdity, to put a Gothic-style window in such a flimsy frame house.” 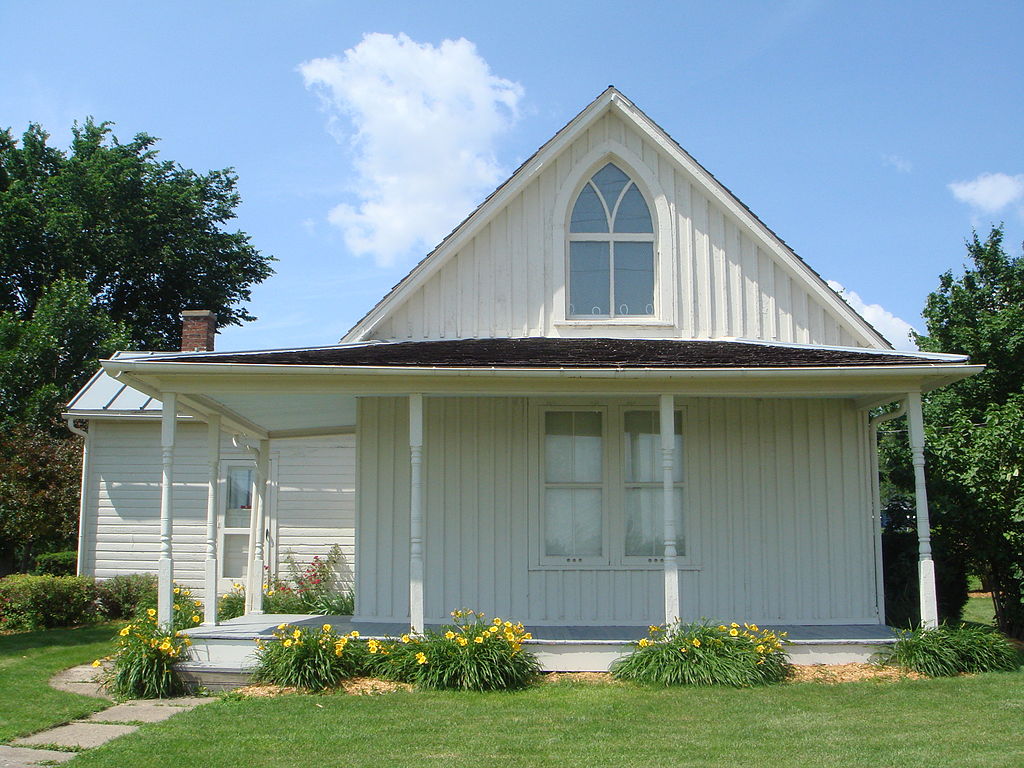 A more luxurious example of the Carpenter Gothic style: 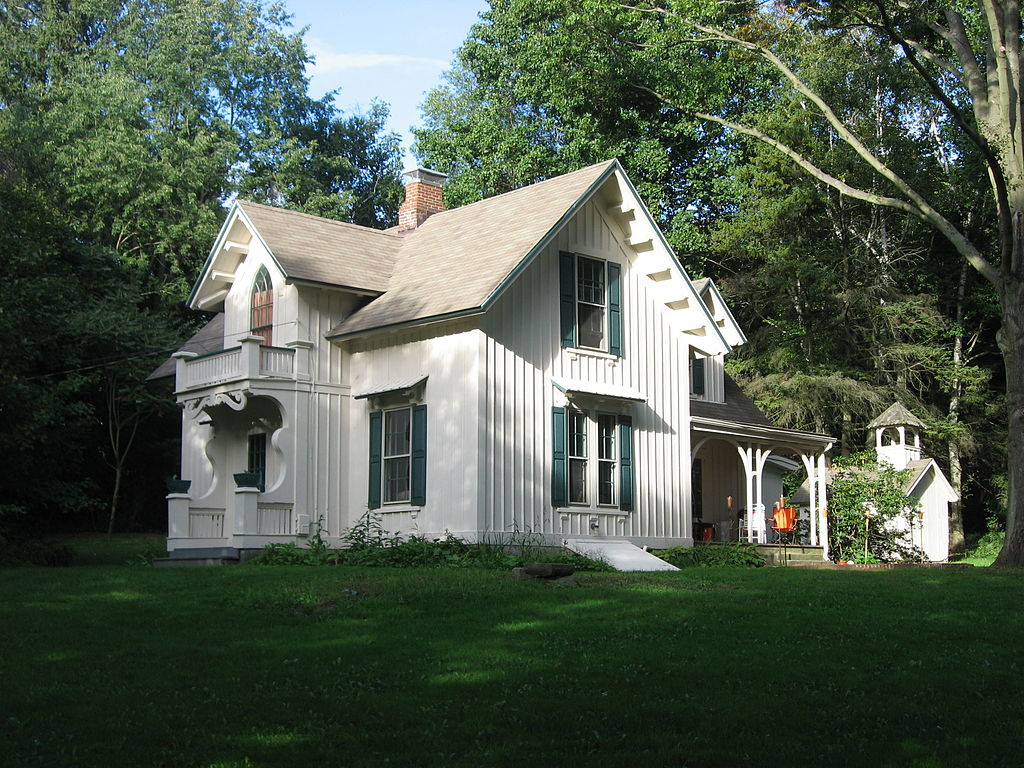 The term originated in “The Gernsback Continuum”, a 1981 short story by William Gibson. Wikipedia cites the relevant passage:

Cohen introduced us and explained that Dialta [a noted pop-art historian] was the prime mover behind the latest Barris-Watford project, an illustrated history of what she called “American Streamlined Modern.” Cohen called it “raygun Gothic.” Their working title was The Airstream Futuropolis: The Tomorrow That Never Was.

The reference is obviously to 1930s Art Moderne/Deco, not 1950s space age futurism, and while today much of the earlier style looks like Bauhaus with curves, at the time it was considered the wave of the future. ”Raygun” in the originally envisioned time frame points you squarely at the Buck Rogers and Flash Gordon movie serials. It is a metonym for entire genres of pulp science fiction and, implied in the working title of the book, a future never realized. 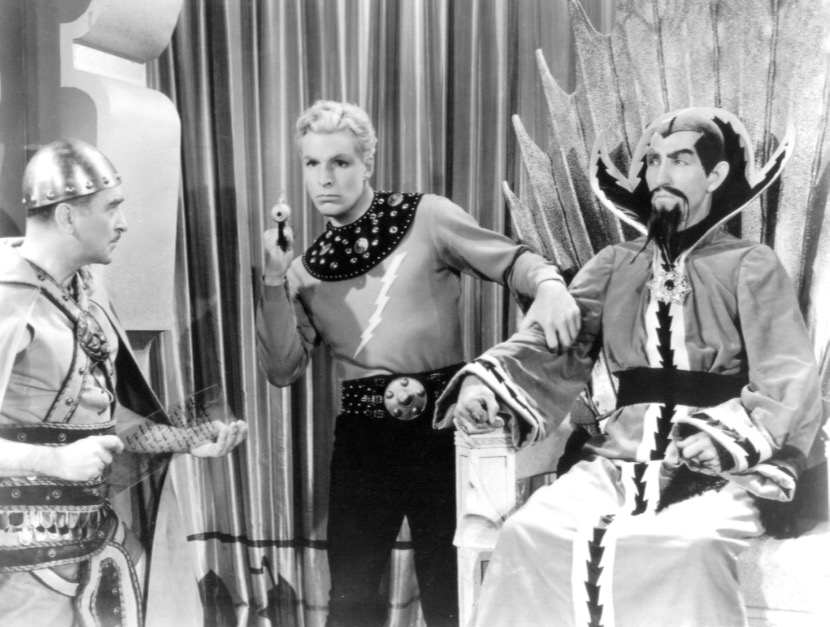 Well, yesterday’s embodied future usually ends up as today’s kitch. If I had any objection to “raygun Gothic,” however, it would be that it trivializes the era and its architecture in a single compound word. But the term is not used in its original context today, which may still be lightly ironic, but not necessarily an off-the-rack value judgment. To insist that it does is to suffer from a kind of etymological fallacy: that the original meaning of a word is eternally valid and the “true” one. Otherwise, “raygun Gothic” could only be used to talk about Deco.

Gothic in the short story is likely an ironically humorous juxtaposition of the sublime and the naive futurism of the 30s and its expression in material culture — viewed from the luxurous hindsight of the 1980s. Of the epochal terms in art and architecture, Gothic seems the most flexible. You‘ve already met Carpenter Gothic. Carolingian manuscripts were written in Gothic script, and earlier German books in Gothic type inspired by it. One can still write a Gothic novel, and there’s Goth this or that in popular culture. Now try that with Rococo.

“Raygun Gothic” has now been applied to the 50s-early 60s, the height of post-war optimism until assassinations, riots, and Viet Nam pushed WASP America onto a different course. I would suggest that the raygun — or its Star Trek avatar — is more applicable to that era than the 30s. The space race revitalized the science fiction genre — and improved its technobable and props — while vast numbers of American boys played with toy rayguns: 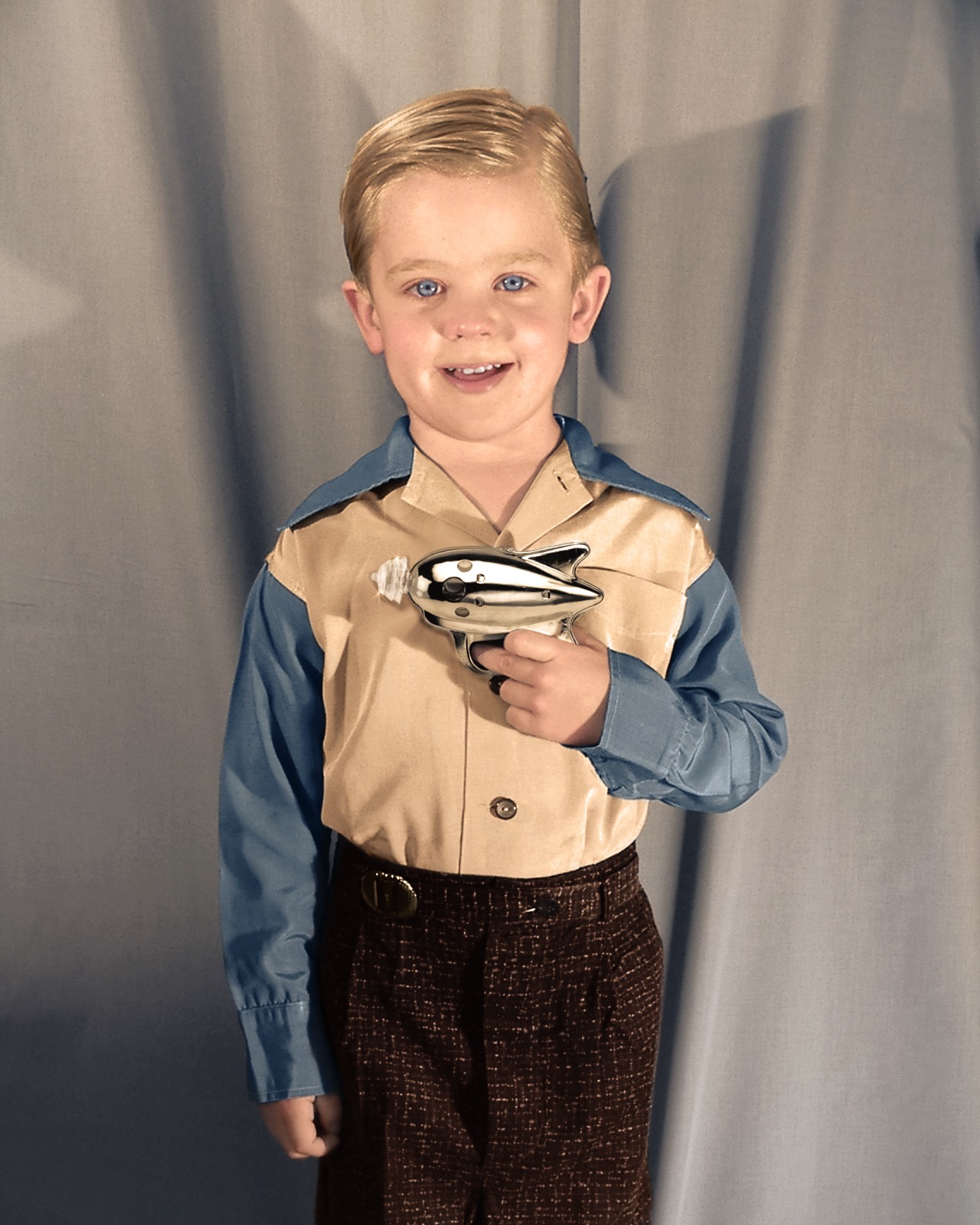 I would submit that there may be more in common between the Gothic and the 50s than you think. Both styles can embody a sweeping verticality, and what could be more vertical than the space race? Some late Gothic is marked by a particular playfulness, which no one can deny the bright colors and skewed acute angles of the 50s. In fact, if you plugged the concepts verticality, playfulness, with an option of cultural optimism into some sci fi graphic visualization contraption, you might get something like this: 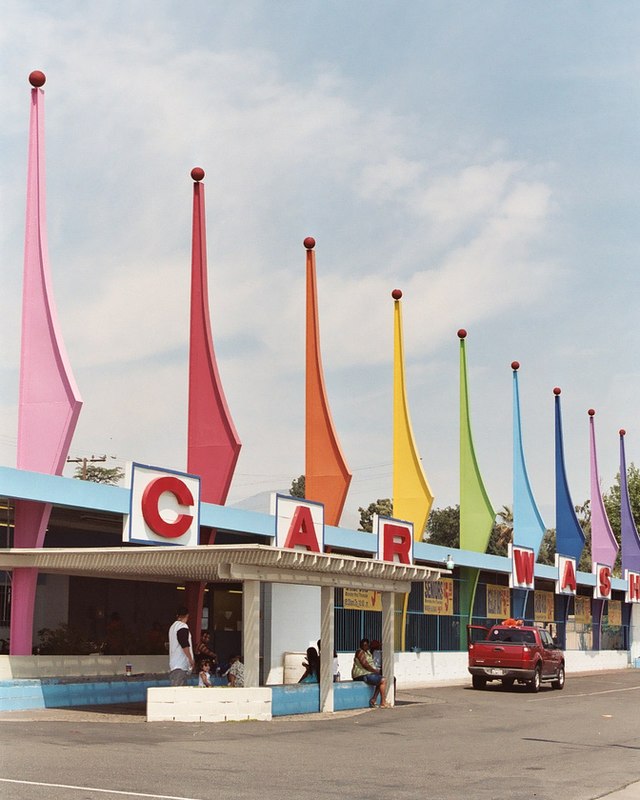 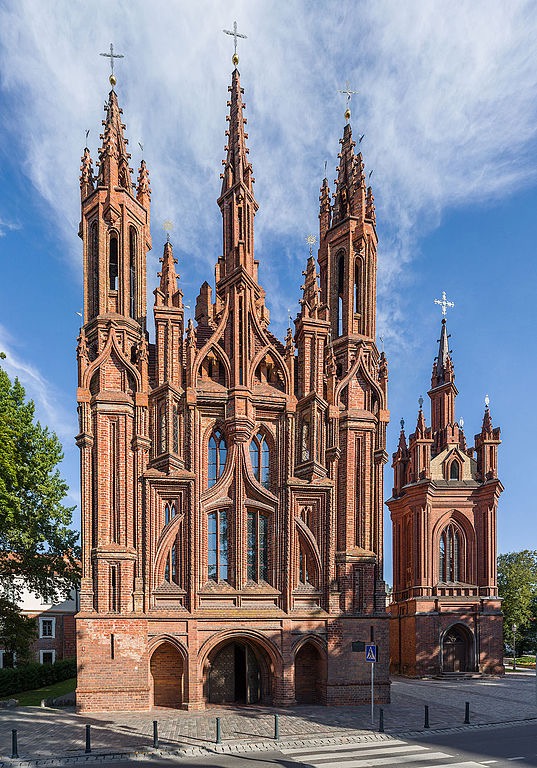 The style of this building is called, with good reason, Flamboyant Gothic. Playful. Vertical. And a city that builds such a structure is either optimistic or wishes to inspire optimism with such a structure. Not to mention that those flanking towers look like they could launch at any second.

Even more so than in the wider universe of speakers of a particular language, vocabulary among smaller communities is a matter of social contract. The process is, however, often not especially democratic, but shaped by the choices of elites. At least on the internet, everyone has a voice, and if your argument is cogent and persuasive, you might win others to your point of view. That Gothic should only be applied to a specific time or the revival of certain of its characteristic forms, I think that battle has already been lost. Just look at the background of Grant Wood’s painting.