What is this word spoken in this video and what does it mean?

Prior to the word/s I can't understand there was a discussion on what the historical sources of British individual civil freedoms have been. A few of the reasons given for these British values have included things such as the Magna Carta, the Parliamentary system etc.

Along comes Peter Hitchens and says:

It's fascinating the way all these British values merchants are so coy about the real basis of the liberty which we enjoy, which is the particular form of Protestant Christianity which this country adopted, which created in people the strength of conscience, the self-restraint, the belief, very strongly, that law should be above power because the law derives ultimately from God. That is what actually makes this country what it is, but they won't talk about that because many of them are not Christians, many of them are active secularists, and many of them are nominal Christians and they don't really believe these things. That's what made us what we are and made us the kind of country we are, and to try and generalise this into some human rights (incomprehensible) is to make a fundamental mistake as to how it came about...

The word I can't understand is marked (incomprehensible) in the above transcription.

The word definitely sounds French to me. I first thought it could possibly be "melange", but I don't think he's saying that. Then I discovered there's a French dessert called blancmange, which actually is pronounced in a way resembling the words he spoke, so it's possible he's said this. However I can't find any definition of "blancmange" other than:

(Cookery) a jelly-like dessert, stiffened usually with cornflour and set in a mould
Collins Dictionary

I've checked a bunch of dictionaries and this is the only definition I can find. "Blancmange" comes from the French "blanc" (white) and "manger" (food/eating).

If he is actually saying this word, I can't understand a metaphoric way in which it's used. I really don't understand. Does anybody understand what he's saying?

Here is how "blancmange" is pronounced.

And here is the video in which Peter Hitchens speaks this word.

Note, both Peter Hitchens and his late brother use/used a wide vocabulary when speaking, and many terms are obscure or foreign or just generally hard to catch sometimes.

To try and generalize this into some kind of human rights blancmange is to make a fundamental mistake.

Here are the subtitles

The word 'blancmange' is mediaeval French in origin (it means 'white food'), and originally in English (in the Middle Ages) meant a kind of fish or chicken stew made with milk and rice flour. Later this meaning evolved to mean a dessert made from milk, sugar, and cornflour. This dish is widely despised among the older middle and upper-class English people who were made to eat it as children. Its qualities include insipid flavour, lack of firmness (like a jelly), being thoroughly mixed (no identifiable ingredients), messiness (it is sloppy on the plate or in the bowl), suitability for invalids, young children and old people with no teeth, etc. These qualities make it usable as a pejorative label for an argument or position which the speaker feels is a messy mixture, weak or lacking in substance. Peter Hitchens is a British far-right commentator who has made no secret of his opposition to, and contempt for, what Americans call 'liberal' values, such as respect for human rights, diversity, and so on. 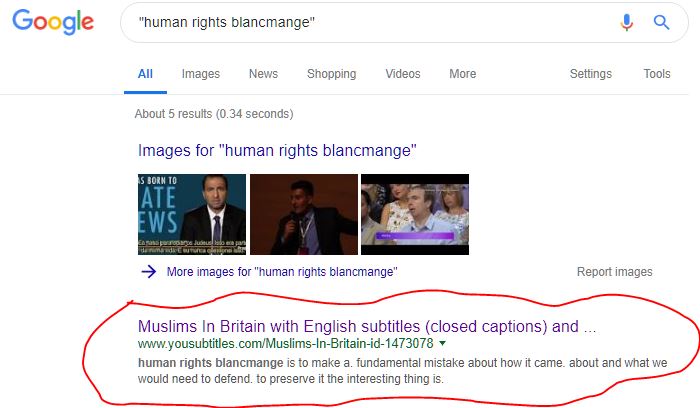 If you do this Google search, don't click on the lower (Watchfreevids) links - they lead to a spam site, and you will be forced to do a fake "Amazon survey"), and you will never get to see any subtitles for anything.

Not the answer you're looking for? Browse other questions tagged speech or ask your own question.

28
American vs. British English: meaning of “One hundred and fifty”
5
Punctuation within quotes
10
Difference between would and will
3
How many syllables does “Science” have?
2
Most concise way to describe information not guaranteed to be accurate? Missing or assumed details at fault
2
How common are “shooken” and “tooken” in spoken speech?
0
How to distinguish the spoken language and written language?
0
No article before a noun (spoken language?)