Why do we call it “combination lock”? [closed]

Edit(to give it more context)

Why don't we say variation(or permutation)? The order matters in this case and combination is an unordered set of numbers.

Because most people are not mathematicians.

I know that sounds like a flippant answer, but it's genuinely the answer. There are many words which have a more precise (or even different) meaning for specialists, and the fact is that these words simply have both meanings. The question "Is a tomato a fruit or a vegetable?" is an all too familiar example: to a botanist, it's a fruit; to most of us, it's a vegetable.

So the fact that mathematicians use "combination" in a more restricted way is irrelevant to almost everybody who uses the locks.

combination is an unordered set of numbers

That is incorrect in general English.

It is called a combination lock because (in general English)
a combination is "an ordered sequence" (Merriam-Webster definition 2a).

You tagged the question with: etymology, names, and mathematics, but you won't get an answer that combines the three because mathematics/statistics give the term "combination" a specific meaning which is (usually) at odds with the general English use case.

It is however, common enough to be in the dictionary definition referenced above (definition 2c).

COMBINATION means an arrangement in a particular order that can be used to open some types of lock. Combinations can be hideous or horrible or agreeable.In combination lock we imagine that agreeable situation that unlocks. 'Variations' does not give this idea of agreement of one with the other. An example:

Examples have been found from Roman times and museums have examples circa 1200 when, the Muslim engineer Al-Jazari documented a combination lock. 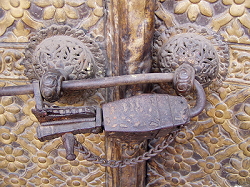 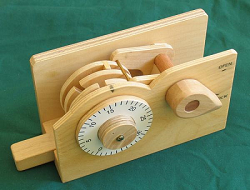 Perhaps the name was popularised since 1909 because it was patented as a physical object, not a mathematical concept.

Thus it's the way that "word combination" locks the usage.

My invention is an improvement in locks and consists in certain novel constructions and combinations of parts hereinafter described and claimed. 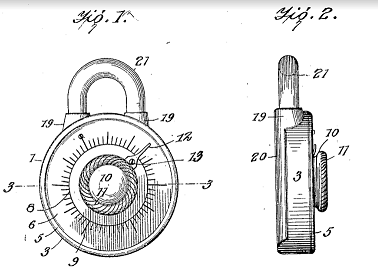 The object of the invention is to provide a combination padlock, of simple and cheap construction, which will be strong and durable, and not liable to get out of order easily, and in which the combination may be easily changed.

It is simply the combination of characters that let us pick holes in the term.

I'm not certain of the etymology but it's possible the original design required a combination and the increase in security to require a permutation was a later development. In which case it was originally a mathematically accurate term, but became less so when both types were available. Either that or the word was never used here for its precise mathematical definition.

Not the answer you're looking for? Browse other questions tagged etymology names mathematics or ask your own question.

1
Why do we “shed” blood, sweat or tears but not other things?
2
“To Cut Stick” Origin
0
How to express combinations using “any […] by […]”
14
“I've gotten better-looking as I get older” When did “gotten” re-enter the BrEng vernacular?
1
Layman-accessible nouns for the intersection and union of sets of appointments
1
Single-word or idiom request to mean “overshoot the runway” and its etymology
8
So which should it be - 'lock and load' or 'load and lock'?
0
“Specialize” as a transitive verb and an antonym for “generalize”