What do you call the interconnecting bits of a puzzle piece in English?

This is hard to describe, but I'm curious about what the proper word is for these thingies in English.

So I searched for a picture on Google and circled what I'm referring to with red: 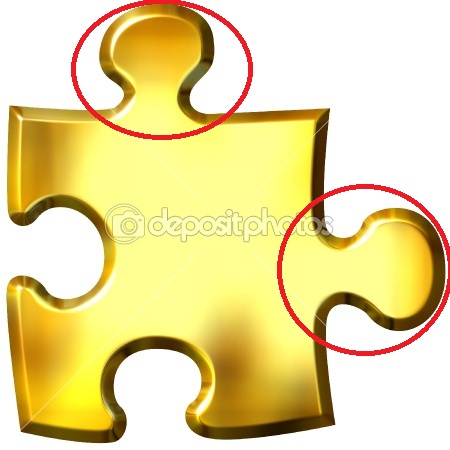 This kind of puzzle is called a jigsaw puzzle, and the corresponding Wikipedia page uses the terms tabs and blanks. (The parts you've circled are the tabs.)

Looking further throws up many citations for "tabs": this book on DNA computing calls them jigsaw tabs (and pockets), this book on programming also mentions interlocking tabs, this issue of Make magazine calls them jigsaw tabs (and slots), and there are lots of other books. There seems to be more consensus on what to call the circled pieces you want (tabs) and less on what to call the other kind (blanks, pockets, slots, indents...).

You can also trawl through search results for jigsaw (tab OR tongue OR outie), to compare the answers suggested. (Need to look at each result individually to make sure the word is used in the right context. In fact most results aren't about the context we want. :-))

However, it is also a fact that there is no universally accepted terminology. For instance, this book on the history of jigsaw puzzles says on page 10 that

Despite a few attempts at a comprehensive classification of piece shapes and cutting designs, there is still no generally accepted nomenclature. Manufacturers use a variety of terms, as do puzzlers. Puzzle pieces can have "loops" and "sockets", "knobs" and "holes", "tabs" and "slots", "keys" and "locks", or any of several other alternative designations.

Speaking as a fully-qualified jigsaw puzzle solver, I can say that the standard word is an outie. Terminology shared with belly-buttons, except normally only jigsaw outies interlock with innies.

According to this glossary people also call them tabs or knobs, but the problem there is they don't have an obvious term for the corresponding innie, so I'd stick with outie. A jigsaw is a game anyway, so there's nothing wrong with using childish terminology.

All I can suggest is tongue, as in the joint in carpentry known as tongue and groove.

I believe 'tenon' and 'mortice' are the appropriate technical terms.

Looking at the Wikipedia article on jigsaw puzzles, they use the word tab:

Some fully interlocking puzzles have pieces all of a similar shape, with rounded tabs out on opposite ends, with corresponding blanks cut into the intervening sides to receive the tabs of adjacent pieces.

In English, it's reasonably common that - strangely enough - there IS NO WORD for a certain fairly common thing.

(There's possibly actually a term for this phenomenon - like "grasp words" or "thingy words" or something.)

Note for example, Justin's first comment on the question - which is totally correct and typical.

I have never, ever, ever heard them referred to in any way, in English, other than something like "the thingy that sticks out" "the hole thing on the edge" "the whatever tonguey thingy"

Note that even if you look at software (like the actual computer code, in c# of whatever, relating to machines that cut puzzles) you just seeterms like TheOutThingy OneOfTheHoleThings and so on.

Again - in my opinion - among English speakers it's reasonably common that - strangely enough - there IS NO WORD for a certain fairly common thing. We stick with "thingy phrases" and sort of deliberately don't settle on a word. IMO the - thingies - on jigsaws are a perfect example of this.

So, IMO, there is literally no word for these in English - even among jigsaw aficionados or in the games industry.

{A small point: Note too that the jigsaw-puzzle industry is largely German, as it happens, so you could possibly look to the German language for guidance here, if you're trying to "decide on" what we should all call these thingies.}

Another way of calling it would be male plug or male connector.

I'm coding a puzzle game right now and I've found this thread while searching for an appropriate variable name. I've decided to go with plug, because I was looking for a generic term that describes both tabs and blanks, innie and outie, ricky and morty etc. Plugs can be male or female, where male corresponds to tab and female to blank.

And here's a little code for fellow software developers:

I am a woodworker and I often happen to explain that I craft puzzles without those joints. Native speakers do not assimilate those Wikipedia's tabs and blanks. So forget them if you want a layman to grasp the meaning the first time. Instead, I use figurative onion or bulb or protruding onion-shaped bulge.

Edit. Another comparison is a peninsula contrasted to the bay or fjord to which it fits.

3
What are the terms for the 6 kinds of jigsaw puzzles pieces, based on their configuration of tabs (innies vs. outies)?
16
Term for using "thingy-esque" phrases rather than a common word
4
Word choice: rut, dent, groove, hollow, ridge, channel
2
Is the word *pingle* widely understood to mean something outside the dictionary definition?