The Opposite of Frugal

I am looking for a word which might be used to describe the unnecessary and lavish expenditure of money.

I seem to recall this particular word roughly being the opposite of 'frugal'.

An example sentence might be; "The Decor of Sir Wilfred's house pointed to a _____ lifestyle"

adj a. Extravagant; recklessly wasteful of one's property or means.

For what little of the mixed hardwood stands had survived..at the end of the seventeenth century had been laid waste by greedy and prodigal princelings.

Adjective: spending large amounts of money without thinking of the future, in a way that is not wise:

There have been rumours that he has been prodigal with company funds.

Although the meaning is a clear antonym for 'frugal', there may be an argument that it's being most commonly used in association with 'son' in reference to the parable of the prodigal son, creates a certain potential for confusion over the meaning in some quarters with people thinking it is to with returning after an absence rather than being spendthrift.

I'd use profligate, as per the Google response:

recklessly extravagant or wasteful in the use of resources. 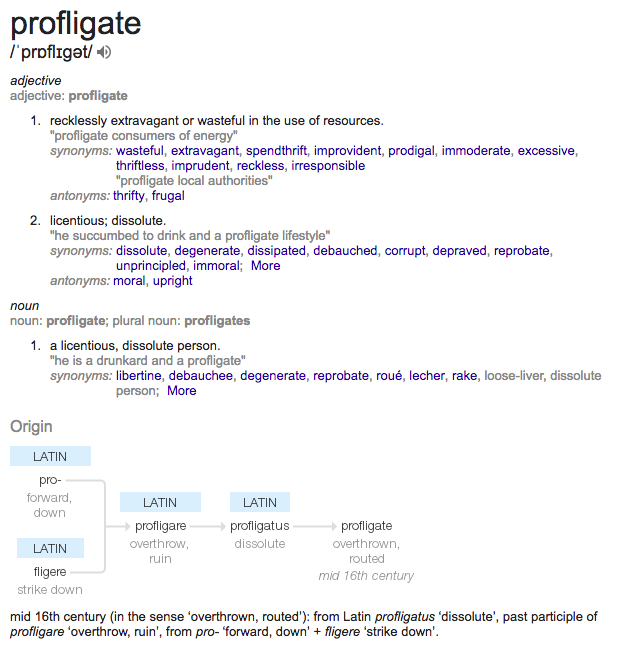 a person who spends improvidently or wastefully

This is the first word that ever comes to my mind for the needs of this question. The word is in general use.

Extravagant works well in this context, I think. From the OED, 'Exceeding the bounds of economy or necessity in expenditure, mode of living, etc.; profuse, prodigal, wasteful.'

I see only one adjective: luxurious  : characterized by opulence, sumptuousness, or rich abundance : of, relating to, or marked by luxury. For example: luxurious accommodations (From Merriam-Webster Dictionary)

Consider squandering, the present participle of the verb 'to squander':

to spend extravagantly or foolishly

extravagant itself would work as well, I guess.

18
Word for the opposite of “hypochondriasis”
10
Word that means “the opposite of what you would expect”
0
Word for something that happened to oneself due to circumstances
0
Opposite of the word “specific”
1
What is the opposite word of “spoiled”? As in “spoiled child”
1
An adjective to describe the nature of information used to blackmail someone
3
A word for an informed guess in mathematics, proved later to be the correct guess