Is there a more common and not humorous word for pedipulate?

I just asked a question on The Great Outdoors SE about snowshoes, and said that I found large snowshoes hard to manipulate, and then changed manipulate to pedipulate, not even knowing if that was a word. But it is! Oxford Living Dictionaries says of pedipulate:

[with object] To work with the feet. Chiefly humorous

And then says of its origin:

I looked up pedipulate, synonyms and, on the first two pages of the Google response, found no synonyms. The closest I got was on Foboko, which said:

No synonyms were found for this word

But this source did not have a definition or a sample sentence either, so they know less than I do. And on page two, the search degenerated into "how to use uttermost in a sentence", which is unhelpful to the uttermost.

One could, of course, use phrases like "less clumsy", but is there an unhumorous synonym for pedipulate? I could even use manipulate and people would know what I meant, but is manipulate the only non-humorous answer to my Q?

Response to Comment of @1006a: A generic term is too easy. I'd like something that references feet or brings feet immediately to mind.

The esteemed Oxford English Dictionary can only supply definition No. 7 of tread

7. transitive. To press (something) downwards with the foot or feet treadling or pedalling.

The nearer the fore-end of the Treddle you tread, the easier you bring down the Pole.

I don't know how much help this is, but I think it's your best bet. 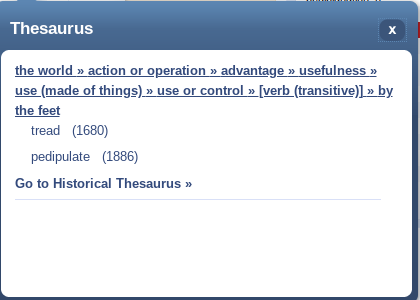 4
Word request: Well-known and generally accepted
2
Word for something so obvious there is no need to state it
1
What is an appropriate one word replacement for the word "spam"?
1
Other word for practitioners of parkour or other free/obstacle run styles
3
What is it when... it is not hubris or self mocking or self disgust, but funnier?
3
Specific Word Request For a Word Similar To Narcissist
2
What is a natural term for the "partial word" in a game of hangman?
0
Is there a word for "a word or phrase whose lack of understanding by a reader does not stop his understanding the gist of the sentence it's used in"?