Does “everywhere and nowhere” mean “irrelevant”?

An Italian student, a young man of twenty, came to me today with a bunch of papers in his bag. It was the questions and answers to a multiple choice English quiz. We're talking hundreds of questions. He needs to pass this exam really well if he has any hope of being accepted in a military academy.

Choose the alternative which is closest in meaning to the word in brackets and which does not change the meaning of the sentence. “The question is [irrelevant]”

He reasoned that "inappropriate" was the best choice but the so-called correct answer is the one marked x. I don't think either one is right, the "correct" answer is an idiom with which I am most unfamiliar. The expression that I do know is “neither here nor there”

Having no significance or influence on the question at hand.

The synonyms listed are: beside the point, betwixt and between, irrelevant, unimportant, unrelated, impertinent

But it has been many years since I lived in the UK, and maybe “everywhere and nowhere" is used nowadays. Google tells me it is the title of an English 2011 film, which suggests that the idiom(?) is used but it is not listed in any of the main dictionaries I consulted. 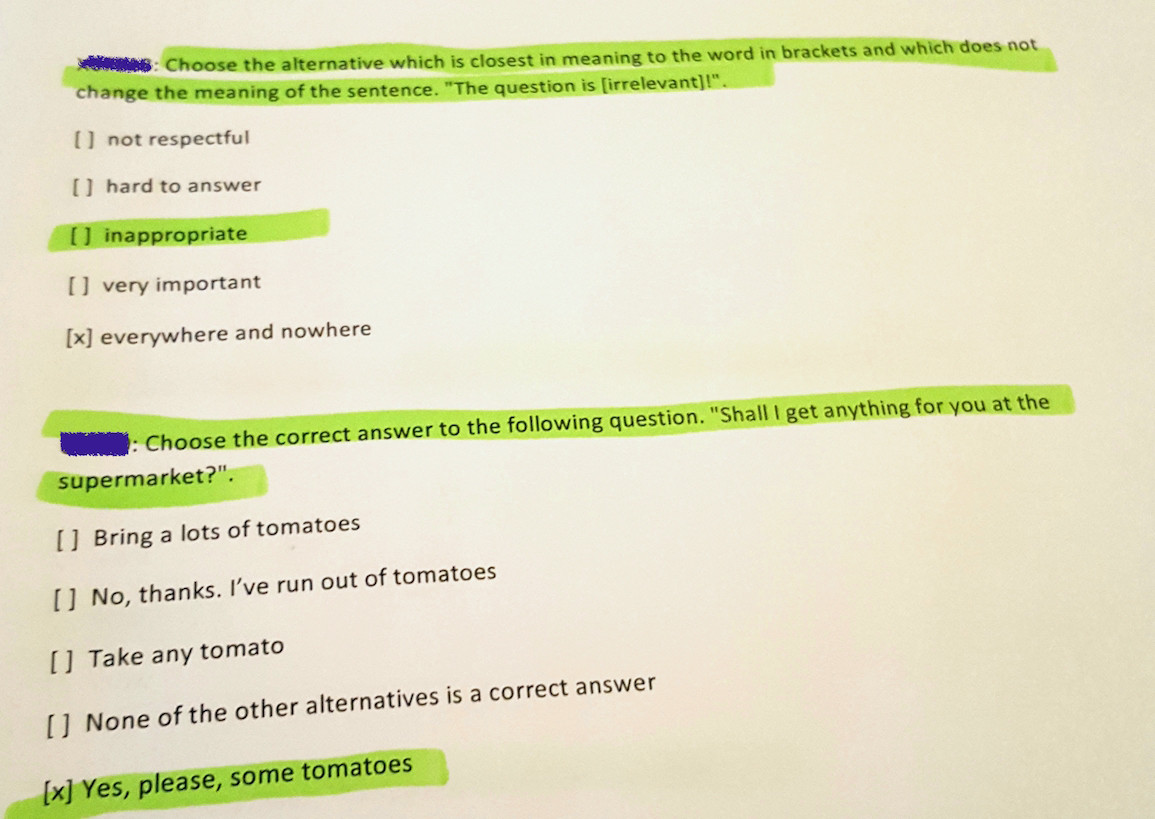 I would have also picked everywhere and nowhere if forced to choose between those options. But I wouldn't have been happy about it.

Without actually looking at a thesaurus, when I hear the word irrelevant I think to myself immaterial, unrelated, not useful, beside the point, off topic, and has no bearing. Only one of those is what Wiktionary lists. Further, I would never associate irrelevant with impertient—so I find that synonym strange. (But that's just based on my personal associations.)

By the process of elimination, I immediately ruled out the first four possible answers. (Unlike the Italian student, I would never associate irrelevant with inappropriate. That word has a negative connotation to it that I don't get from irrelevant.)

That left me only with everywhere and nowhere.

When I hear everywhere and nowhere, I think to myself unhelpful and meaningless. Those are at least close to irrelevant—and certainly closer, in my mind, than any of the other options.

But, as I say, it's more a process of elimination for me than an affirmative statement. (A kind of two-step equivalence.) Everywhere and nowhere is certainly not something that would leap into my mind as meaning irrelevant.

Having now composed my answer (not having wanted to have research affect my subjective response), I see that Merriam-Webster shows the following in its thesaurus for irrelevant:

Phrases Synonymous with IRRELEVANT
beside the point, neither here nor there

I note that neither here nor there has almost the same meaning (or non-meaning) as everywhere and nowhere.

I would have picked the correct answer, 'everywhere and nowhere' because the other options are all wrong.

I came here because I was using this exact expression to describe the bitcoin network, I'm not exactly sure if it's the correct use so I searched the internet for an answer.

The way I have always understood this expression (as a native English, English speaker) is that the 'thing' you are describing is everywhere and at the same time, can't be seen or found and is therefore apparently nowhere.

The bitcoin network is everywhere but if you wanted to shut it down, you wouldn't be able to find it and therefore, from your perspective it's nowhere.

I would say things like government surveillance is also everywhere and nowhere. It is everywhere but at the same time from your perspective, it's nowhere.

To actually answer the question... in a sense, I would argue that it does mean irrelevant, such as: It is all around you, but it can't be seen and there is nothing you can do about it so therefore you can consider it irrelevant. Don't waste your time on things that you cannot change.

No, everywhere and nowhere doesn't mean irrelevant (that's neither here nor there).

Obviously at the superficial semantic level it's a kind of oxymoron / paradox, but in practice, it's been used over centuries to mean present everywhere, but noticed nowhere - when referring to how God manifests Himself in the world of men, for example.

More recently, it's also often used to mean disorganized, lacking focus or direction. To my mind...

He's everywhere and nowhere
=
He's all over the place (agitated, but lacking focus)
+
He's getting nowhere (trying, but achieving nothing)

When I hear "everywhere and nowhere" I tend to think of it as meaning 'unpredictable.' But, basically, I'd argue that the test question is inappropriate (because it's confusing and basically nonsensical).

Not the answer you're looking for? Browse other questions tagged meaning expressions idioms or ask your own question.

2
Does the expression “put the clothes on your back” have an idiomatic meaning?
7
What does “Not to be a dick, but—” mean? Is “Dickishness” an accepted, stand-alone English word?
4
“Any way, shape, or form”
6
Can anyone authenticate the claim that “grungy” was used to mean “envious or jealous” in 1920s slang?
4
Someone who “eats like a …” is someone who eats a lot or has a huge appetite
6
what does the phrase “a real word” mean?
0
Is “no better than” more of a kind of comparison or more idiomatic?
0
Missing definition of “night and day”
1
Another word for “ikigai”