Is there a word that describes or denotes a type of conversation in which two speakers speak two different languages.

In our country, Pakistan, there are approximately 75 languages, from which Urdu, Punjabi and Sindhi are common, excluding English.

Speaker 1 has Urdu as their mother tongue.

Speaker 2 has Sindhi as their mother tongue.

Speaker 1 and 2 spoke their own mother tongue, which are different (Urdu and Sindhi) but both can understand each other's language.

I thought that this is known as "intermingling conversation," or a "code switching." In my opinion, we can't use such words because code-switching refers "shifting completely to the other language for a word, a phrase or sentence, and then revert back to the base language."

I agree that the question (which is suspected as a duplicate one to this question) is really a duplicate, but its single answer still doesn't satisfy all. In that question, the phrase "bilingual dialogue" was suggested, which I (and others may) think that this refers to the code switching as well, which I don't want here. Some words confuse the readers which sense do they mean.

I would also love to quote the comment of @Lambie regarding the term "bilingual" over here:

"Bilingual refers to one person. Not two people each of whom has a passive knowledge of the other's language but do not speak it well enough to use it actively."

In his book Talk in Two Languages, Joseph Gafaranga examines, among other things, the patterns of conversation within bilingual families. He calls the pattern described in the OP's question the parallel mode. Here is a screenshot from Google Books of the introduction to his discussion of the parallel mode pattern. 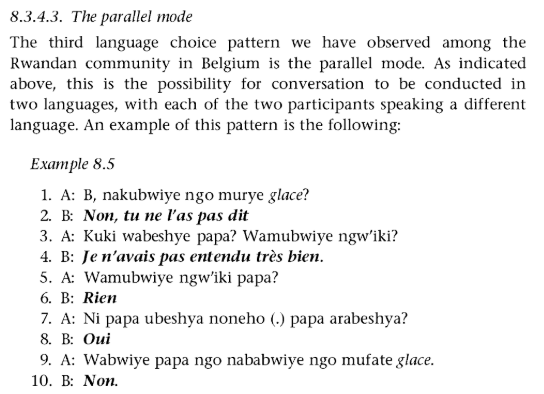 So by Gafaranga's terminology the Urdu and Sindhi speakers were conducting a conversation in parallel (language) mode.

I believe the most accurate word you'll find for the conversation itself is "bilingual." As in:

The two ladies were having a bilingual conversation

However the inability of the two speakers to fully command both languages is a property of the speaker, not the conversation. The term for this inability is "receptive bilingualism." You would need to change up the syntax a bit to clarify the situation:

The two ladies were having a bilingual conversation, however both were only receptively bilingual in the other's language.

"Passive speaker" is another way to refer to this type of speaker, however this could also imply that the speaker is simply non-aggressive in their speech.

One term that comes up in this context is cross-language (or cross-linguistic). I haven't found a formal definition for this term, but it is fairly transparent. It collocates with "mutual intelligibility" (see below) but also appears in contexts where, for example, the participants in the conversation are employing an interpreter. A couple of examples of use (bolding added):

People using Skype or web applications can now have a cross-language conversation, each speaking in a different language.

Another potentially relevant term is mutual intelligibility. From Wikipedia:

In linguistics, mutual intelligibility is a relationship between languages or dialects in which speakers of different but related varieties can readily understand each other without prior familiarity or special effort.

Note that in linguistics "mutual intelligibility" generally1 refers to inherent characteristics of the languages, rather than special knowledge on the part of the speakers—that is, it's usually used for related language "pairs" like Portuguese and Spanish or Swedish and Danish,2 but generally wouldn't be applied to, say, an English speaker who knows some Mandarin and a Mandarin speaker who knows some English speaking to one another in their own languages.

With that caveat, I think the adjectival form, mutually intelligible, could be used for your situation. The plain meaning of the phrase is fairly transparent and would seem flexible enough to encompass the English/Mandarin situation described above, particularly as it is also used in non-linguistic contexts to describe communication and conversations. Some examples of use, both technical and non-technical (bolding added):

In my experience of observing Spaniards and Italians talking in their respective languages to each another, it is possible for them to have a mutually intelligible conversation as long as they speak clearly.

Whatever the differences between the Stoics and the Christians, they can be put into mutually intelligible conversation.

So for your example, you could say something like

1 "Generally" only because I've seen some suggestion that sociolinguistics occasionally use it in a different sense.
2 See the May 28, 2014 Language Log post "Mutual intelligibility" and especially its comments for an informal discussion of the degree of mutual intelligibility of dozens of language pairs.

It has been called code-mixing in academic papers.

Code-mixing is the mixing of two or more languages or language varieties in speech.

There is a concept of diglossia.

By stretching it a little, we could also call this particular situation (where individuals speak a single language but understand two) as a case of diglossia?

In this particular case there does not seem to be any high or low language, but simply two persons from different backgrounds speaking different languages (hence it is a situation of multiculturalism) but sufficiently familiar with the other language that they have a passive knowledge of it.

What is interesting to guess, is how this situation might evolve in time: by one language supplanting the other? Or a fusion of the two, similar to what happened to Middle English? Or a third language (as English) taking over?

I am a translator and interpreter and speak four languages (I am quadri-lingual, in fact). There is no specific term for this. And it's certainly not bilingual.

If this refers to two people, it just means they at least passively know each other languages but actively only use their own. They each have a passive knowledge of the other's language, otherwise they'd be speaking one or the other. They are passive "speakers" of a language. passive speaker

But beware: In the world of translation and interpretation, a passive language has a more technical meaning: it means the language from which a translator or interpreter is working. This is often symbolized as: German>English, English>Chinese. If a person is bilingual (which is not as frequent as one might imagine), this is signified like this: English<>Chinese.

Here is a blog post about this issue as regards active and passive vocabulary in language learning, though it applies to monolinguals as well. passive and active vocabulary

I often speak English to my husband and he responds in Spanish. We have a conversation in two languages.

Bilingual means an individual can speak two languages equally well, though there are different levels of bilingualism. And, if I hear someone say: "We had a bilingual conversation." I would understand that each of the speakers spoke two languages and both switched back and forth between those two languages without causing a break in their conversation due to lack of understanding.

As for codes, mixing and switching them is not "inter-lingual". A speaker code switches within her or his own language.

Reading over the answers, I had to laugh when thinking about having a conversation with someone where one person uses a different language than the other and they understand each other. Of course, they understand each other, otherwise it would not be a conversation, would it? And, I daresay that mutual intelligibility is an issue that does not involve more than one language necessarily. Who hasn't had a conversation with eggheads in a monolingual situation where there was no "mutual intelligibility" at all?

And for the record, the idea that a Spanish speaker can understand a Portuguese speaker is a very specious idea. The fact much in the two languages is very similar does not account for the parts that are completely different. And this can lead to major misunderstandings and comical situations. (I just can't think of an example at the moment, as I write.) The mutual intelligibility factor is true only to a limited extent.

10
A conversation between 2 persons in two different languages

10
A conversation between 2 persons in two different languages
5
What do you call someone who knows multiple programming languages?
3
A parent who has more than one child with one or more partners: “Poly-what?”
20
Is there an English word to describe a group of refrain words composed of two syllables e.g. pera-pera, meaning fluently, iki-iki meaning vividly?
2
How to describe someone who mixes two dialects?
2
How to wish someone “good luck” without implying that luck is involved?
15
Word for when we accidentally invert the syllabic utterances of words?