What is the origin of the term "cone of shame"?

What is the first known use of the term "cone of shame"?

This refers to the plastic cone affixed around dog's necks when they have had a procedure or medical condition.

Wikipedia fails to shed any light and limits itself to saying 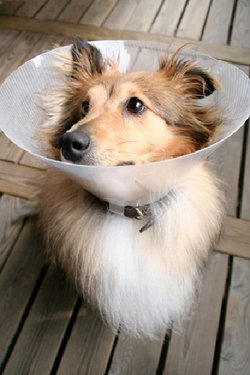 I found a reference that predates the Up movie by a good eight years, although I'm sure there must be older usages out there somewhere.

In a 2001 Usenet post to the alt.fashion newsgroup, user Michele317 says:

on a fashion note, he's refusing to wear what the vet calls an 'elizabethan collar' and what i call 'the cone of shame': that plastic lampshade thing. i took him to the vet yesterday and found out his runny eye was due to a tiny scratch in his cornea. i decorated the cone with stickers, and removed the gauze tie and replaced it with a jaunty ribbon, but all to no avail. and a massive thanks to everyone who told me dog accessory websites... so much cute stuff out there!

Cone of shame goes back a ways. Cone of shame is a regional vernacular, which means it's a term not commonly used outside a particular area. I know it had been used around where i live since the 90s. These terms can go national or international through proper exposure though and they stop being regional and become common slang. CoS is similar to Trash Panda which wasn't widely used until recently, TP became popular because of the internet though where as CoS was made popular because of a movie.

Cone of shame was used in our region, upper midwest USA Minnesota, in the early 90's. I think references came before then also, some in comedic acts or daytime television.

That previous comment reply about the cone of silence being a Get Smart sourced reference is also wrong, it showed up in Dune before that, and possibly sooner in other literature (like up to a decade sooner). Dune and Get Smart came out the same year, but the published Dune was written long before publishing and the first episode with the cone of silence was not the first episode in the series.

According to wikipedia and knowyoumeme.com, the term was first used in the movie "up."

The 2009 animated film Up coined the colloquial name "cone of shame" for the collars, which feature as a minor plot point.

The Cone of Shame is a meme that originates from the 2009 Pixar movie UP. In it, a golden retriever by the name of Dug is placed in a medical device called an Elizabethian Collar as a punishment by his pack.