Short blurb-style wording for "pizza made at the establishment"

A gastronomic establishment that isn't a pizzeria serves pizza they actually make, as opposed to buying premade pizza and just heating it up. How would they emphasize this fact in a short blurb on their website or in an advertisement? In Polish that would be "pizza z pieca", which translates directly to "pizza from oven", but that feels awkward and imprecise in English.

I suspect that in the US, the phrases might be Fresh Made and Fresh Baked but I'm not certain.

The term Fresh Baked has a homely ring to it and is clear that the pizza was not baked elsewhere and transported.

Another answer mentions that the French and Italian equivalents to in house are often used in English menu-ese - and the straight English version is itself used too.

In house isn't food-specific, as the following definition from Oxford Living Dictionaries shows:

attributive Done or existing within an organization.

‘Each employee receives ten days of training a year, as well as an in-house training and development programme called Jigsaw.’

‘Yet there are at least a dozen reasons why organizations still prefer in-house application development and deployment.’

The house in in-house is, I presume, the same house as we find in phrases such as house red, house speciality, full house, on the house and one sense of house rules; the relevant definition and sub-definitions from Oxford Living Dictionaries follow:

2 A building in which people meet for a particular activity.

‘a house of prayer’

2.1 A business or institution.

‘he had purchased a publishing house’

as modifier ‘I ordered a bottle of their house wine’

‘Food arrives at our table - not food we have asked for, but a small appetiser with the compliments of the house.’

‘We'll dine at the fanciest and snootiest drive-thru restaurants and waffle houses.’

A few food-relevant examples found in the wild follow:

From the August 2018 menu of The Grace, Bristol:

Everything made in house

There is adjectival use of the phrase in the following headline:

The first store in Brickell opened in April and serves Mediterranean-inspired items. This style of food appeals to today’s diners (millennials, in particular) because it offers an array of flavorful healthy choices.

Zuuk has all the elements that the market currently demands including variety of flavors, affordability, and fresh ingredients sourced daily and cooked in-house. All of which is in a fun and friendly ambiance.

The relevant parts of a New York Times article follow:

Made in House? Prove It

PARIS — The black-and-white symbol looks like a saucepan with a roof for a lid. And if it sits next to an entry on a restaurant menu, it signals that the dish is “fait maison” — house-made.

A new consumer protection law meant to inform diners whether their meals are freshly prepared in the kitchen or fabricated somewhere off-site is comprehensive, precise, well intentioned — and, to hear the complaints about it, half-baked...

This article also uses the phrase house-made, which, as another answer points out, is a valid North American alternative to made in house, and not just a direct translation from the French, as I had previously mistakenly thought.

A bit of a tangent regarding homemade

Also in The New York Times article, homemade is used, as mentioned in another answer, as equivalent to made in house.

This use of home made not meaning made at home but made on the premises, strikes me as American rather than British, and there is some evidence to back that up.

adjective Made at home, rather than in a shop or factory.

Whereas the quintessentially American Merriam-Webster gives the following definition:

1 made in the home, on the premises, or by one's own efforts

(I've added italics to highlight the relevant part of the Merriam-Webster definition.)

There does, indeed, appear to be a transatlantic difference here, although I imagine any British English speaker would be familiar enough with the American meaning not to even pass remark on it.

The standard English answer would be "home made" (dictionary.com, which uses the example of "the restaurant's pastries"). The space is optional, so you could sell "homemade pizza".

"Maison" (French for house) is sometimes seen even in English, and an Italian restaurant may well use "della casa" ("of the house").

"From the oven" doesn't really work, as it doesn't say who made it before putting it in the oven. If the oven is a traditional wood-fired oven, that would be worth boasting about, and could be used to imply homemade as well as good quality.

If you're going for brevity, how about "pizza made here" or "fresh pizza"?

A commonly used idiomatic expression is (made) from scratch.

Pizza made from scratch!

Entirely without the aid of something that is already prepared or in existence. Refers to making something, usually food, from the raw or base ingredients or components, rather than those that have been preassembled or already partially completed.

She doesn't have time to make cupcakes from scratch, so I'm sure they're from a box.
If you want some real from scratch cooking, try Jesse's Café—it's as close to homemade as it gets.

"Made on premises" is common short-hand.

I'd use "house-made" in American English.

North American - (of food or drink served in a restaurant, cafe, etc.) made on the premises.

Anecdotally, I've seen this frequently used in restaurants in the US to refer to food made by the restaurant. I'd expect it to be understood by a general audience to mean "made in-house", and it's a bit more versatile for use in a blurb.

If this is US, and you're talking about literally making the dough (from water, flour etc) in the shop, the actual answer is

Made fresh in store 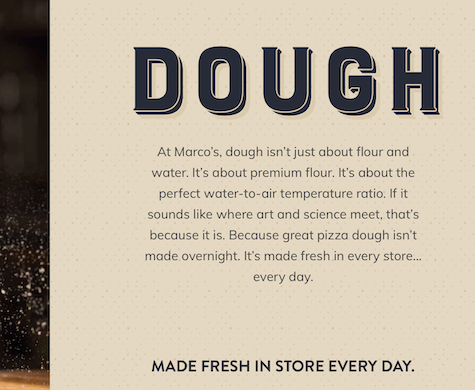 that's from the only one of the large chains in the US which does so, so that's the only answer by definition [*].

(or as mentioned in the other answer, the excruciating recent "made from scratch in store")

War of escalation in US marketing terminology

Often the government gets involved. Back in the 90s they legally took over the word "organic" so that massive companies could use it legally. So when you see garbage labelled "organic" in the US now, it is not at all what anyone would consider "organic", it just meets certain requirements which lobbyists put in place. (Of course, actual farmers cannot use the term - obviously!) So actual organic farmers have to start using "biodynamic" or "farm grown" or something, so then immediately McDonalds starts selling biodynamic Big Macs, so the farmers have to go with pesticide-free, etc, so this is how the plethora of terms like "localvore" came about which are co-opted successively by Burger King.

Another one was with quality potato chips, you had like "hand cooked", which Lay's started using, so they had to go to "small batch" and then "cooked in small batches in copper kettles" and so on and on. Another one is "draught" beer (which you can .. get in cans!), so then you have "genuine draught" (which .. you can get in cans!), and so on.

Note that as I mention in the other depressing answer, "scratch made" (or just "scratch" - so, a big sign "scratch pizza") for now is a term for this in the US. (However, within a short time, this will "escalate" and you'll get frozen generic pizza food products in the supermarket with "SCRATCH" in massive letters, so that term will be gone, and ANOTHER term (perhaps .. "ingredient-stepped" or "preindustrial" or something ... I can't guess .. I use to make these up for a living but I'm too drunk these days) will have to come along, which will in time be co-opted.

[*] Note, I don't own one of those franchizes in question, so I don't know if they really, actually make dough in the morning (ie by putting flour, water etc in a large bowl), or if they just "legalezed it", if they were able to edge the meaning. (You know, like "made in America" has some legal definition along the lines "82.3% of parts assembled (may or may not include financial engineering) in plants predominately owned by subdivisions of US listed entities" type of thing. So I have no clue if that pizza chain really delivers flour in the morning and makes dough with it, but that's the language used for the putative paradigm under discussion.

In (most parts of) the USA,

is a thing now. (I guess "from scratch" was not trendy enough.) 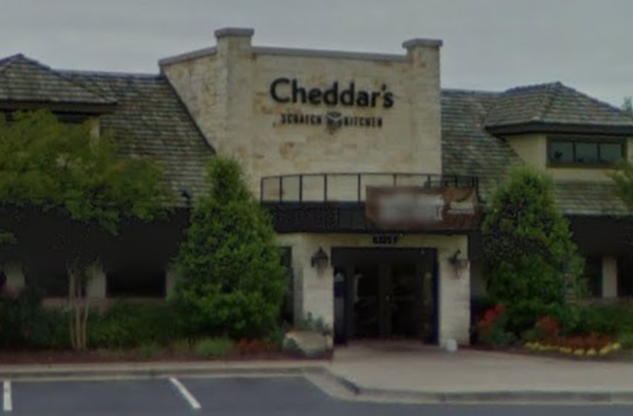 If you want the current "advertising-ism" (in the US experience) - that's it.

(Unrelated, you could certainly throw in "artisanal", "localvore", "hand-dived", etc.)

1
"The odor of strong rum made a greasy pass through the room."
2
Wording for threshold description (greater than or equal to)
2
Better wording for "Among other [stuff]"
0
What's the conventional style for writing a conversation taking place in another language?
3
a short phrase for 'exert strength with the hand'
14
Short for "common wishes that everybody says she has?"
3
How to wish someone "good luck" without implying that luck is involved?
3
Idiom suggestions for 'made an impact'