Mine’s a gin and tonic

I encountered a sentence that's full of British culture:

I have found a pair of my father’s old tan driving gloves, the sort that say ‘Mine’s a gin and tonic’ and that my mother would have accessorized with her horsey headscarf from Country Casuals.

I found out that Country Casuals is a brand of clothing, but I don't understand what the phrase ‘Mine’s a gin and tonic’ means... I only know that gin and tonic is a popular drink in the UK, but what does the phrase mean here?

Also, I'm not a hundred percent sure of the meaning of 'horsey' too. The closest definition I believe is 'large and clumsy' but it feels a bit odd in this sentence.

"Mine's a [name of alcoholic beverage]" is said in a pub when someone is buying a round of drinks.

John: It's my turn to buy a round. What's yours Susan?

Susan: Mine’s a gin and tonic, thanks.

John: What about you Bill?

Bill: Mine's a pint of lager.

What's yours? = What drink do you wish to have?

They spend a lot of time outdoors with their horses and the women often wear a headscarf as a protection against the weather.

Below is a photograph of a young H.M. Queen Elizabeth looking at horses whilst wearing a headscarf and gloves. (Edited to add 'gloves') 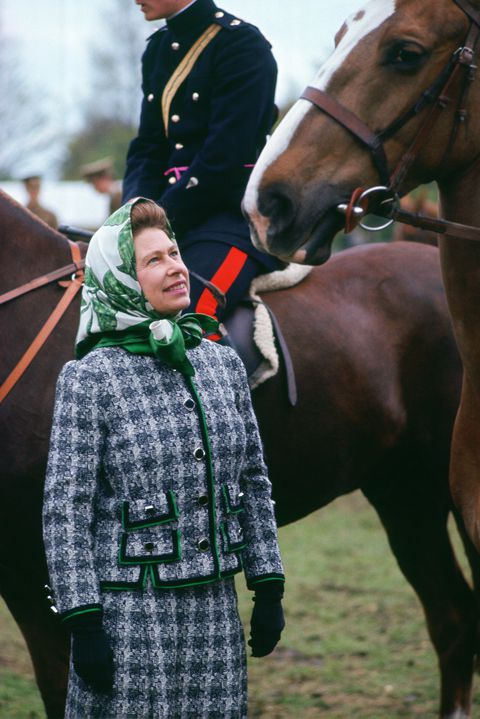 chasly from UK's answer is correct, I think what the author is really trying to get across is that they're posh, or at least dress that way. A gin and tonic is a popular enough drink with all classes of England now, but if you look like your drink of choice is a G&T then you are definitely not working class.

The picture included in the discussion of the word horsey is of the Queen, I think that's a great choice of picture. It can also mean is interested in horses generally, but I don't think it does in this context.

To add an answer about the gloves:

Back in the 1950s/60s, gloves with (especially tan-coloured) leather palms were a fashionable accessory for drivers of sports cars and similar vehicles (and those aspiring to them).

(Practical too, providing warmth and grip, in the days before effective heating and padded leather steering wheels.)

Thus they would be an indicator of a similar class of person to the G&T drinker - affluent middle-class, or ostentatiously pretending to be such.

To add an answer about the gin:

Gin has a long history and so it is not surprising they its social status had varied considerably. In British culture the biggest change was when what had previously been cheap alcohol for working-class Londoners became fashionable amongst British Army officers in India. They had been encouraged to consume quinine as an anti-malarial drug and this was made more palatable by making it into tonic water. It was found that gin made this even more palatable and soon replaced whisky and brandy.

I see from Wikipedia that G&T (as it is often referred to in the UK) is a cocktail. However no one thinks of it like this in the UK. It is just the normal way to serve gin.

All the references in the quote in the question plant us firmly in the 60s-70s-80s. At the time a particular sort of person would have had a particular sort of drink. Since then there had been a gradual trend against stereotypical drinking towards people simply drinking what they like so a drink choice says much less about someone then it used to.

Some of the other answers have made headway, as regards the definition of 'mine's a G&T', but the entire point of the quote is really to define this couple in a single sentence.

They are both middle-class, from a time when that was 'more important' to be recognised as such than it is today.

He has gloves which suggest he drove a sports car or Jaguar*, which would define his drink as G&T rather than beer. Her mode of dress would be appropriate to that & a weekend at the horse trials.

It defines an entire class & culture from (probably) the 50s/60s in one sentence.

Below is a comment on the outmoded class-structure in the UK at the time, not my personal opinion...
*This would make him one of the class defined by those not belonging to it as 'The Gin & Jag Brigade'. It was a derogatory description, usually used by those who would prefer beer, even if they could afford the car.

'Horsey' describes the type of person who would attend gymkhanas & horse trials & describes the kind of attire one would wear to those... but (if it were not the author talking about her own mother, but a general perception of those times) could be a double 'attack/criticism' on not only the social class of the woman, but also her (alluded to) visual appearance. Large-framed, broad-hipped, long-faced; similar appearance to the horse she is accustomed to riding, or did in her youth.
Note that even in these times, the description 'horsey' wouldn't ordinarily be applied to someone with merely the physical appearance mentioned above - it would have to go hand-in-hand with the social definition.

Refs for 'the Gin & Jag Brigade'.
I can't find a dictionary definition as yet, but a couple of newspaper reports using it in such a way that it's obvious they fully expect their readership to already be well-aware of the term.

The Telegraph - They can't mean us

The Guardian - Town bristles at 'gin and Jag' slur

Urban Dictionary has a non-authoritive definition

Also... Ask Andy About Clothes but please take your social-responsibility-for-the-easily-offended hard-hat with you to this one, which is full of 'colourful' explanations - though technically just about SFW (safe for work).

In a social setting, it is common to ask people what they are drinking. If there is a group of people, a conversation may go:

"What are you drinking?"

Why is this in your book

Richard Boston was a politically comedic journalist (akin to Mark Twain or Gary Trudue) who was born in London in 1938. He wrote a beer column which highlighted local/small breweries rather than the big names. This made him popular with the brewers, but he had a secret, he didn't like beer. When they would ask him what beer he was drinking, his reply was "mine's a pink gin." Wikipedia

Pink gin is simply another type of gin, which can be mixed with tonic.

I do not know why the phrase has been changed from the quote. There is another article that quotes him as saying "mine's a gin and tonic" directly: click

I do believe this meaning gives a more nuanced description of the character.

As said in other answers, "horsey" is a description of someone who enjoys the less labor intensive aspects of owning a horse.

To be instructive to the non-native English speaker (Olivia Lo), English sentences or utterances are classified as one of four types: declarative, interrogative, imperative, or exclamative. "Mine's a gin and tonic" would be exclamative with the usual context being a prior interrogative (What would you like?) by someone else. By the way, exclamatives usually end with an exclamation mark (!), which is not present here.

The reference to "horsey scarf" is simply a reference to the person's scarf that would usually be worn, for whatever reason (it had pictures of horses or was warm or was rough weaved ...), when going to an event that involved horses.

It is the tone of the whole conversation that would betray it as being middle class.

I don't fully agree with chasly from UK. Obviously, horsey is an adjective here, and has nothing to do with 'upper-class' according to wiktionary.

Not the answer you're looking for? Browse other questions tagged meaning phrase-meaning or ask your own question.