What's a non pejorative way of saying that a woman is bigger? [duplicate]

In French you could say that a woman is plus en chair, plus ronde, which are not necessarily pejorative.

How can I say the same thing in English?

Lindsay Lohan was cuter when she was […].

I'd probably opt for one of the following (and definitely not use the word large - I don't know any women who'd take that as an unambiguous compliment):

She was cuter when she had a fuller figure

Edit: Since people seem to be having difficulty imagining a fuller figure without conjuring up images of Godzilla, here's a comparative photo of the actual person OP is referencing, before and after she lost weight. I don't think anyone in their right mind would call the curvier Lohan fat. 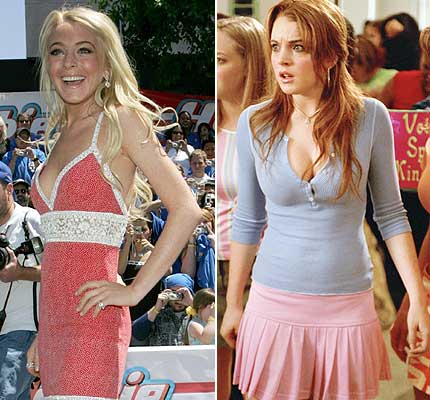 Large is possibily a word that (might) not cause too much offence. Filled out or fuller figured are perhaps good alternatives, too. I like the term "voluptuous", which is often used to refer to an attractive, larger woman. With all of these options, the person to whom you are referring may take offence anyway - use with caution!

There is no safe way to phrase this, but you might have more luck by turning it around:

Lindsay Lohan was cuter when she was less skinny.

There is no non-pejorative way of saying that a woman is bigger.

Don't. Women are so conditioned to think "bigger is worse", that there is really no way to get through to them that way.

If it were me, I'd instead concentrate on the negative aspects of the current look. With a society where women are conditioned to think they are never attractive enough, sadly this is much more likely to get through.

Personally I find it quite unattractive (if not frighening) when I can clearly see the contours of bone joints on a person through their skin. I don't think I'm alone there.

So for your example, it would be more like

.. when she wasn't so skeletal.

She was cuter before she lost all that weight.

As used by my friends: "When __ didn't look anorexic", even when they were just plain thin.

If you are saying "was cuter" isn't your sentence is already critical of her physical appearance? If you would like to be more positive when talking to a woman, find something you like about her as she is now and don't concentrate on the past. On the other hand, talking about a woman's physical appearance without her around might, in some audiences, lean towards being viewed as critical or going too far no matter what you say.

In general, when commenting on a woman's physical appearance, or any other attribute for that matter, you're always better off sticking to the positive.

Also, if it were me, I would avoid going into too much detail unless you are intimately involved. It's a subject that often has a very high emotional response and must be treated with delicately if you want to have a happy response.

Not the answer you're looking for? Browse other questions tagged word-choice euphemisms or ask your own question.