What does "per" in this case means?

I'd like to ask about the sentence below from Conan Dolye's Sussex Vampire.

This is from the letter Sherlock Holmes got from a (some kind of) law firm. Can anyone tell me what this "per E.J.C." in the last part means? If this "per" means like "through", then does this "E.J.C." represent someone's name (person in charge)? If so, why wouldn't this person spell out their name instead of the abbreviated form? If it's a formal letter using such term as "Faithfully, yours". Does that mean this person is in such terms as Holmes will easily tell by who he got the letter from with only those initials? Or, does this E.J.C mean the name of a mail company that sent this message to Holmes or something? Or Is this the abbreviated name for some medium I don't know? If that is the case, Is this "per" working in the same way as in "by ship, by car"? Can someone elaborate this for me? Thanks.

At its most obvious, per is Latin for "through" and appears to mean "through the agency of" and would mean that E.J.C. was the person who wrote the letter on behalf of the partnership. Unless they happen to appear later in the story we can assume they are an unimportant clerk. It is probably an abbreviation for per procurationem, "through the agency [of]" which we still use today, abbreviated to pp.

However, as Oxford explains, there is now confusion as it is often put in front of the entity you are writing on behalf of whereas it should be in front of the agent as in your example.

According to THE NEW ANNOTATED SHERLOCK HOLMES (Volume 2) Paperback – 2005 by Leslie S., Editor Klinger, E.J.C. is a person who wrote the letter.

Note: I found this information by Googling "Who is E.J.C. in Sherlock Holmes" 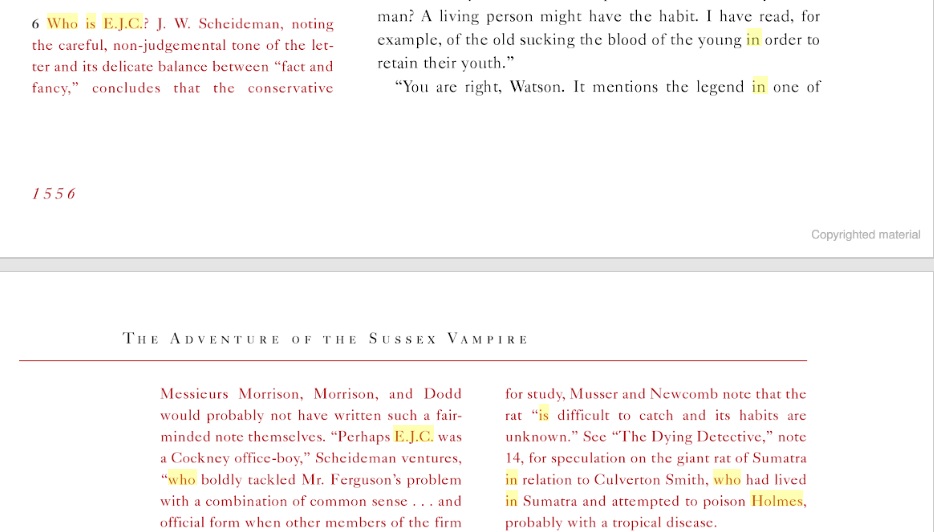 Not the answer you're looking for? Browse other questions tagged meaning word-choice expressions or ask your own question.

21
What are initials?
1
what does "I can promise you the one but not the other " from Memoir of Sherlock Holmes (the final problem)
1
What does Conan Doyle’s “at the Sydenham end of the road of that name” mean?
0
I’ll swing for it!
2
What does “black” mean in this case?
20
Meaning of "The devil with you"