The image and integrity of what was once a game but is now a business is damaged in the eyes of all, including the many youngsters who regarded you as as heroes and would have given their eye teeth to play at the levels and with the skills that you had.

I understand that giving your eye teeth means that you want something a lot, but what is the origin of the expression?

(As a native English speaker, I had always thought the expression was "hind teeth" — as in the ones at the back that are painful to extract. It seems that I was wrong in this.)

I had thought the term was hind teeth as well, but eye teeth it is. Wikipedia says:

In mammalian oral anatomy, the canine teeth, also called cuspids, dogteeth, fangs, or (in the case of those of the upper jaw) eye teeth, are relatively long, pointed teeth.

In humans, the upper canine teeth (popularly called eye teeth, from their position under the eyes) are larger and longer than the lower, and usually present a distinct basal ridge.

The term eye teeth goes back to at least the 17th century. The earliest I found is in the fascinating 1657 Nature's Cabinet Unlock'd by Thomas Browne: 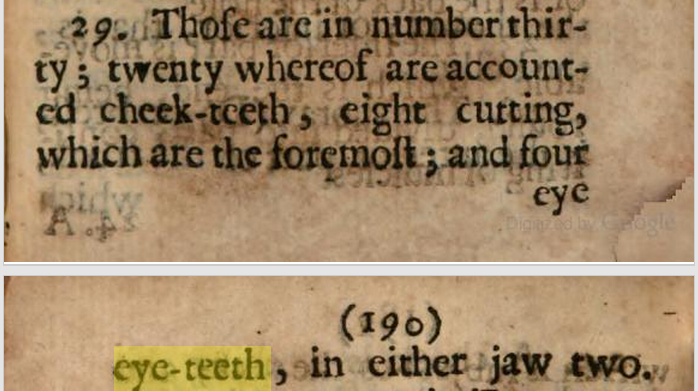 And the 1660 Lexicon Tetraglotton, an English-French-Italian-Spanish Dictionary by James Howell shows the translations all include eye:

The earliest "give/gave [...] eye-teeth" is illuminating. 1836's The Way-Mark: In Which Some of the Turns of the Broad Road are Pointed Out says:

A variant rather have their eye-teeth drawn [out] was said by a Mr. Denny on Wednesday, 17th December 1834 in Congress and recorded in two sources. Once in Congressional Globe says:

And again in Register of Debates in Congress:

From The Town and Country Magazine, or Universal Repository of Knowledge, Instruction, and Entertainment of 1779:

We can see the phrase has changed slightly from preferring to give your eye teeth than give/lose money; to the modern giving your eye teeth for something you really want.

According to world wide words, it's because they lie beneath the eyes.

Why people seize on eye teeth as a dramatic way to indicate their longing for something is harder to get a grip on. If only you were asking about cut one’s eye teeth or cut one’s teeth, I could respond at once by pointing out that the eye teeth are among the last of a baby’s first set of teeth to appear and so to cut them (have them emerge from the gums) implies that babyhood is in effect over. To say that somebody has cut his eye teeth means he’s wide awake and isn’t easily fooled. If you’re cutting your eye teeth (or just teeth) on something you’re gaining experience in a situation you’re new to.

These suggest that eye teeth are especially valuable, because they figuratively embody hard-learned skills and one’s experience of life. The association with eyes results in an even more powerful evocation. To lose them would cause one to be severely hampered, not merely in eating but in everyday affairs.

There was (before scientific anatomy) a belief that the canines were directly connected to the eye. Whether this gave rise to the name, or the name gave rise to the belief, is lost in the mists of time.

1741 A. Monro Anat. Nerves (ed. 3) 159 The two superior‥are called Eye-teeth, from the Communication of Nerves which is betwixt them and the Eyes.

The teeth in front can be associated with health, strength, and attractiveness. People are often ashamed of having a poor smile due to loss of teeth or other problems. Probably overall means trading the value of your teeths attractivenes ( or utility in chewing food ) for something considered of equal value i.e. love, wealth

The etymology of eye teeth is obvious - due to their position below the eye.

Carnivores, on the other hand, need canines to kill prey and to tear meat.

Humans have four types of teeth - incisors, canine, premolar and molars. I would say that teeth have historically always been considered important for determining the health in humans (and animals) and of all teeth the eye teeth or canines are the most important.

Therefore the phrase come to mean

give one's eyeteeth, to give something one considers very precious, usually in exchange for an object or situation one desires

One's eye teeth seem to be more vulnerable when one is struck in the face. If you are a warrior you may be more likely to be missing an eye tooth. To give your eye tooth for something might imply you are willing to put up a fight for something that you desire.

user62838user62838
1
Add a comment  |
Highly active question. Earn 10 reputation (not counting the association bonus) in order to answer this question. The reputation requirement helps protect this question from spam and non-answer activity.

0
What is the origin of the idiom "like pulling teeth"?

7
Why do you survive 'by the skin of your teeth'?
9
Origin of "in a pig's eye"
9
Why is "eye" pronounced so strangely?
10
Why is a black eye called a "shiner"?
0
What is the origin of the idiom "like pulling teeth"?
2
origin of the expression "one eye on the past, one eye on the future"
20
What is the etymology of the term "private eye"?
6
What is the origin of "to lie through one's teeth"?
4
Why does “iris” mean the coloured part of the eye in English?
2
Who coined "the eye of heaven"?