What has this tree done, with respect to the fence (picture)?

I have pondered my neighbour's tree for some time, unable to think of a suitable verb to describe what the tree has done.

I would like to make this into a card, with a caption. And the point I want to make would be that in life one must often cope with obstacles, not by demolishing them betimes, not by avoiding them, not by compromising oneself in respect of them but . . .

Is there a single verb that expresses how the tree has accommodated to the fence or has cohabited with the fence which would also convey that the tree has not allowed the fence to hinder its living progress in any way ? 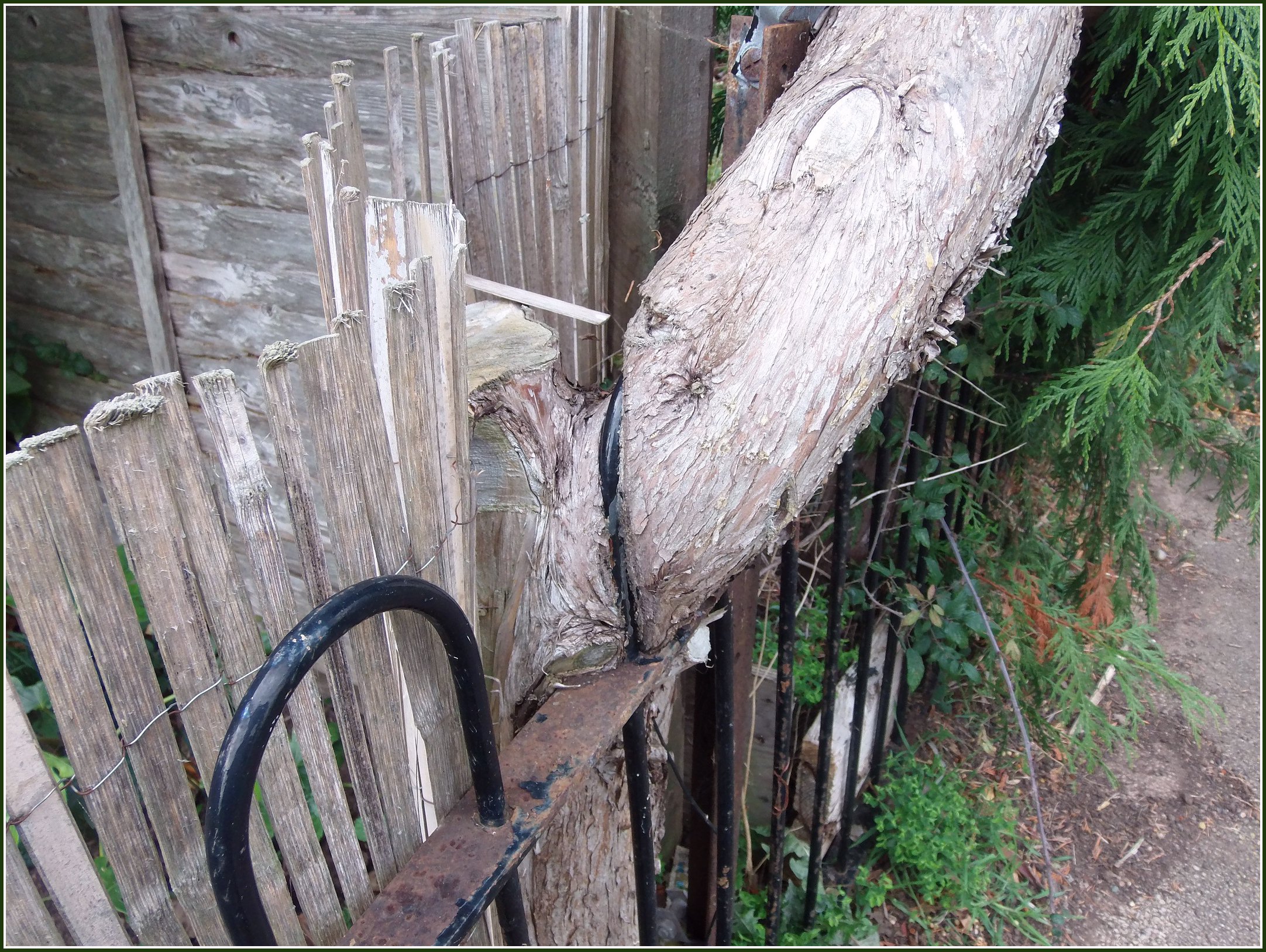 One must work through obstacles, as this tree has done.

work through v.
1. To succeed in resolving something through effort: I worked through the problems I was having with my teacher, and now I'm doing better in class.

In life one must adapt to obstacles not fight them.

adapt: to make suitable to requirements or conditions; adjust or modify fittingly

In life one must embrace obstacles not fight them.

embrace: to take in or include as a part, item, or element of a more inclusive whole

You can have some fun with

In life, one must transcend obstacles, not fight them.

LOL at some of the definitions, which apply pretty literally,

e.g., to rise above or go beyond the limits of

That tree has thrid the fence.

As a verb, "thread" is frequently used to refer to passing through obstacles, hazardous situations, or difficult terrain often with connotations of doing so carefully; "thrid" being the more poetic/archaic version.

v. Simple past of thread.

and the GNU version of the Collaborative International Dictionary of English

transitive v. To make or effect (a way or course) through something.

Negotiate. To "negotiate obstacles" is actually a common expression. I have never heard of these others. In fact I might argue some of these others are just nonsense .. but I would rather not start a war.

Here is my reference

I would propose a word that you've actually used in your question - "accommodate".

It has the sense of getting on with life, while peacefully fitting in with the effects of the fence.

The OED's definition for accomodate (in this sense) is:

"Fit in with the wishes or needs of; Adapt to"

You might also say that the fence has accommodated the tree! Hope that helps.

assimilate. Cambridge Dictionary and the idiom: assimilate with

In life one must assimilate with one's obstacles, not fight them.

"In life one must harmonize with obstacles, not fight them."

harmonize - (verb) to bring into harmony, accord, or agreement.

19
Term for someone who has experienced many hardships
3
Term for the state of a deciduous tree during winter?
2
word for "make money off of an event or situation/use situation as an opportunity for personal gain"
24
How to say with one word: "it has a tree structure"
2
Suffix that is 'opposite' of -able
1
A more formal way of saying "to manage to do something"