Is there an English proverb similar to the Hindi "Elephant goes to the bazar; Thousands of dogs bark"?

There is a proverb in Hindi language

Elephant goes to the bazar; Thousands of dogs bark

It figuratively means when a person progresses with something or succeeds, the people often vilify him and protest. (So let them do what they do. A high-level person doesn't need anything to stop progressing or succeeding) 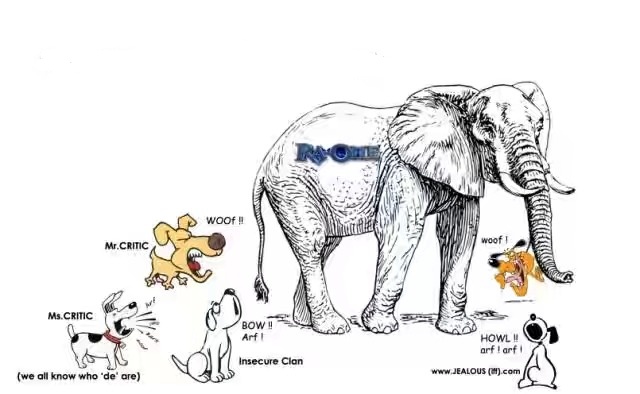 "Haters goin' to hate" fits pretty well. Includes the existence of critics, and the inevitability of critics (for success or otherwise) and that life must go on.

the dogs bark, but the caravan goes on

although of foreign (probably Turkish) origin, is listed in Farlex Dictionary of Idioms.

For origin, see: Sticks and Stones

There's a common English expression, sour grapes, which is fairly close to the meaning you describe.

Strictly speaking, it refers someone who is bitter over something he cannot have:

What's the meaning of the phrase 'Sour grapes'?

Acting meanly after a disappointment.

What's the origin of the phrase 'Sour grapes'?

In the fable The Fox and the Grapes, which is attributed to the ancient Greek writer Aesop, the fox isn't able to reach the grapes and declares them to be sour:

A famished Fox saw some clusters of ripe black grapes hanging from a trellised vine. She resorted to all her tricks to get at them, but wearied herself in vain, for she could not reach them. At last she turned away, beguiling herself of her disappointment, and saying: "The Grapes are sour, and not ripe as I thought."

However you will often hear this meaning extended to a person who is envious of someone else's success. For example, this snippet appears in an online blog that is discussing the tremendous financial success of Apple:

Not very common, but applicable:

It is in the character of very few men to honor without envy a friend who has prospered.

Not the answer you're looking for? Browse other questions tagged single-word-requests expression-requests proverb-requests or ask your own question.

0
Does the barking of a dog diminish the value of a priest?
5
But what if the shoe *doesn't* fit?