Is untasty a valid English word?

I cannot see untasty in Oxford dictionary. Also spelling checker tells it is invalid. But in dictionary.com , I see it is a related form of tasty. Please see screenshot below. So is it a valid English word? 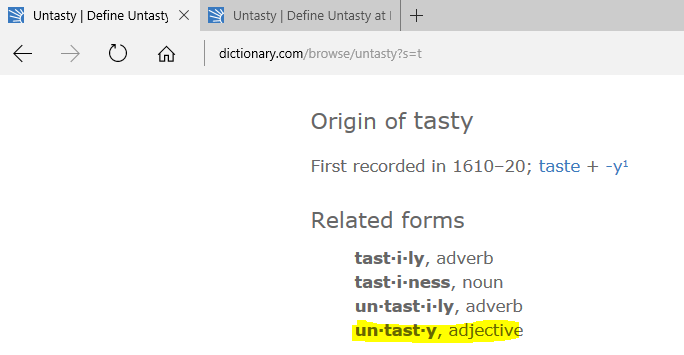 Because people use "untasty", it is a word. It also has a long history, since it dates back to at least 1566 (assuming it only entered the language once):

It is listed in the Oxford English Dictionary, with the above quote and another from 1733 but the entry hasn't been updated.

It's easy to understand its meaning because it's formed by derivation of an existing word. Given that it's not in many dictionaries, it's probably not very popular. In any case there are plenty of widely-used alternatives: yucky, gross, disgusting, etc. However, that isn't to say it's not used at all. A quick search brings up many results of it being used recently in publications:

However, there are some limitations to this intuition, depending on the extent to which healthy food actually is considered untasty [...]
Affective Determinants of Health Behavior

Three or four untasty-looking pumpkins came falling down with the vines.
Twenty-four Eyes

After sampling both, my own judgment is that pitcher-plant water is generally less untasty than bog water, but that the likelihood of protozoan presence in the pitchers would give preference, for safety's sake (should the need arise), to relatively plankton-populated bog waters.
Wildflowers of the Eastern United States: An Introduction to Common Species

For many years, he has fed his pigs the food left over from the local university cafeteria, which is known to be low in protein, deficient in vitamins, and downright untasty.
Loose-leaf Version for Genetics Essentials: Concepts and Connections

Untasty is not widely in use today, though people would know what you mean if you said it.

No, "untasty" is not a valid English word. It is a construct of familiar word-parts like sunsational or funtastic (which no doubt can be found in more recent examples than the obscure centuries-old texts quoted in another answer) so the meaning is understood.

"Untasty" does sound amusing, as if you are being over-polite about something that is horrible – or possibly as if you are from the 17th Century, but it would get a laugh from any native speaker for sounding so wrong.

If it truly tastes bad, the word might be:

Not the answer you're looking for? Browse other questions tagged meaning is-it-a-word or ask your own question.

5
"Demonstratable" — a dictionary word, or just a well known hack?
59
Difference between "publicly" and "publically"
20
How popular is ‘Contrafibularities’ as a day-to-day English word?
4
Is there the word, “Fortunity”? If there is, what does it mean?
13
Is "pronunciate" a word?
4
"Stoic" as an adjective and "stoical"
7
Is "unironically" a valid word?
0
Is "hardwork" a valid word?
8
Meaning and origin of the word "muist"