What does “extend a finger” mean exactly? Is it a commonly spoken phrase?

I came across the phrase “They’ve extended a finger” in the article that came under the headline “Mazie Hirono’s blunt style makes her a favorite of liberal looking for fighter” in Washington Post September 20 issue. It reads:

“Democratic Sen. Mazie Hirono’s voice dripped with disgust as she evaluated how republicans have treated the woman accusing Supreme Court nominee Brett Kavanaugh of sexually assaulting her when they were in high school. ‘You know what? They’ve extended a finger,’ the senator from Hawaii said in an interview. ‘That how I looked it.’”

Though I think “extend a finger” is analogous to "give sb. the middle finder / flip off," I find this particular phrase neither in Oxford and Cambridge online dictionaries, nor on any google wording sources.

Is "extend a finger" as common as being used by a senator publicly? If not, why should she have deliberately rephrased it?

Green's Dictionary of Slang cites variants of the phrase "give someone the finger" as early as 1876, but the earliest citations are not verbatim, e.g.

‘give him the slip,’ ‘put up your educated forefinger at him’

Not until 1941 is the exact phrase "give [...] the finger" cited, meaning, as discussed in other answers, to gesture in a deliberately offensive manner with the middle finger.

The early hits found on Google Ngram appear to be literal uses of the phrase "extend the finger" printed in medical journals or simply describing someone moving their finger in a particular way.

... is not a slang phrase or idiom, but rather a more formal way of saying "give the finger." It is possible that the senator chose the phrase "extend a finger" as a satirical variant of "extend a hand" to ironically indicate the disparity between Republican treatment of Kavanaugh's accuser and how one might expect such a person to be treated, as suggested by Pam in the comments. It is also possible that the senator was simply using more formal language out of habit or with some other ironic intent.

Is it a common phrase as being used by a Senator publicly?

The answer here is no. "Extend a finger" is not a phrase commonly used by anyone, since it is a formal variant as discussed above. It would also not be common for a senator to use the phrase "give the finger" as its slang nature and vulgar connotations might be considered below the dignity of the office. This is not to say that the phrase is "radical" for a U.S. senator, but rather that it would not be a notably common phrase.

J.E. Lighter, Random House Historical Dictionary of American Slang (1994) has an interesting two-part entry for the noun finger in the relevant sense:

4.a. an obscene gesture of contempt made by closing the fist and extending the middle finger, often with a jab upward.—usu. constr[ued] with the. {Despite the dates, this is unquestionably the orig. sense; cf. syn. L. digitus impudicu.} [Two earliest cited occurrences:] {1938 Bezzerides Long Haul 93: "This to you—" and he stuck up a thick forefinger.} 1961 McMurtry Horseman, Pass By 81: They were too silly even to bother giving them the Finger. ...

b. contemptuous or malicious treatment; mocking; betrayal.—constr[ued] with the. [Three earliest cited occurrences:] 1890–93 Standard Dict. 682: Finger, n....To give one the f., to disappoint one, after holding out hopes that his desires would be fulfilled; turn a cold shoulder to one. 1914 Century Dict. & Cyclopedia (rev. ed.) IV (Supp.) To give one the finger to give scanty recognition or encouragement; to act coldly or disappointingly toward one who had been led to expect assistance or friendship. 1930 Lait On Spot 203: Giving the Finger...Cheating.

It is striking how aptly the part 4(b) definitions that Lighter cites from 1890–1893 ("to disappoint one, after holding out hopes that his desires would be fulfilled") and from 1914 ("to act coldly or disappointingly toward one who had been led to expect assistance or friendship") could be swapped in to Senator Hirono's statement and make sense. As far as I know, however, very few people in recent decades have that second meaning in mind when they talk about "giving the finger."

Hirono evidently has a rather salty vocabulary off-camera (as documented in this blog item posted today by a sympathetic journalist). Hirono's wording "extended a finger" certainly makes sense as an allusion to the "obscene gesture of contempt" cited in Lighter's part 4(a) definition; note that Lighter uses the word extending in in his description of the gesture: "made by closing the fist and extending the middle finger, often with a jab upward." I am confident that definition 4(a) is the definition of finger that Hirono had in mind when she uttered the phrase "extended a finger."

This is what is meant by "extend a finger": 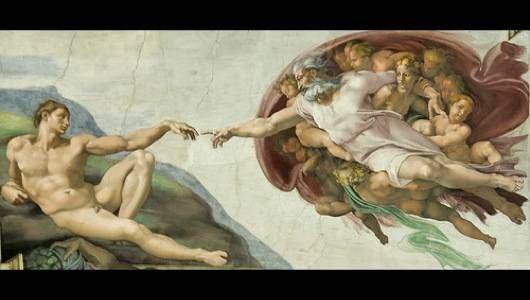 (The point is that "extend a finger" is ambiguous, often deliberately so. Even in the idiom "lift a finger to help" some contribution could be implied, or it could imply total disregard of the one needing help.

In the original quote "extend a finger" could be read as implying a token effort at helping, or it could be interpreted to mean "gave the finger" in the obscene sense. Or it may have been intentionally ambiguous.)

▶ flip the bone from New Part. Dict. of Slang and Unconventional english

to extend the middle finger in a rude gesture of defiance

Like other descriptions of flipping someone off ... it very rude gesture. In AmE, 'to flip someone off', or 'he flipped me' ... is more common than to 'extend a digit', in spoken English. Extend or show middle digit is seen more in written English. The use by the senator is a formal description of the intended message, and rarely by the senate or the house.

Not the answer you're looking for? Browse other questions tagged meaning-in-context phrase-usage idiom-meaning or ask your own question.