I'm Finnish IT-professional and done front-end -web developement mostly in my past. I like natural languages too and today I started to struggle with difference between two IT-related English word.

Can any linguist tell What's the difference between words "template" and "boilerplate". The most wide-ranged English-to-Finnish online dictionary haven't Finnish translation for the boilerplate. I understand the meaning of the both of words in English and can use them but I'm interested in backgrounds of prefix tem and boiler added to plate at the end of the words.

Examples where computer programmers use these words.

It could be better to program some kind of WordPress Plugin boilerplate to avoid redundant programming meanwhile I'm gonna save my time and get my job done faster. My boss will be happy.

In the programming context, template is used for a skeletal or model UI design and boilerplate is reusable code.

In computer programming, boilerplate code or boilerplate refers to sections of code that have to be included in many places with little or no alteration. It is often used when referring to languages that are considered verbose, i.e. the programmer must write a lot of code to do minimal jobs.

A website template is a predesigned resource that shows the structure for the comprehensive layout and display features of any website. It is provided by various suppliers to help make Web design a lot easier for designers.

"Boiler plate" originally referred to the rolled steel used to make water boilers. Metal printing plates of prepared text such as advertisements or syndicated columns were distributed to small, local newspapers, and became known as "boilerplates" by analogy. One large supplier to newspapers of this kind of boilerplate was the Western Newspaper Union, which supplied "ready-to-print stories [which] contained national or international news" to papers with smaller geographic footprints, which could include advertisements pre-printed next to the conventional content.

The man in the foreground below is holding a rounded printing plate. This one was likely produced "custom" by the shop's typesetters, but similar plates might be provided by an outfit such as Western Newspaper Union, as described above. The similarity to literal "boilerplate" is obvious. 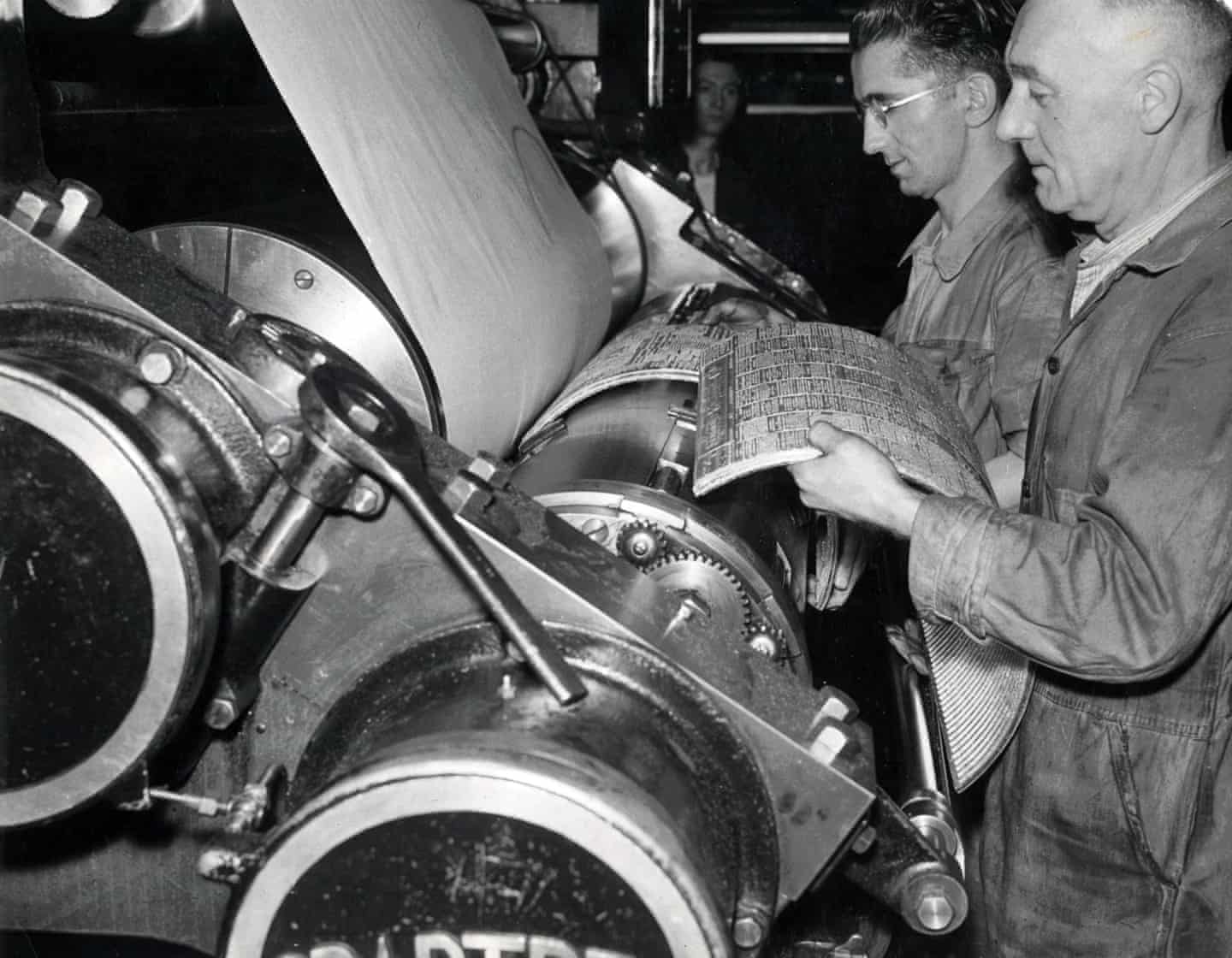 A "template" is entirely different -- it is intended to be modified.

1670s, templet "horizontal piece under a girder or beam," probably from French templet "weaver's stretcher," diminutive of temple, which meant the same thing, from Latin templum "plank, rafter," also "consecrated place" (see temple (n.1)). The meaning "pattern or gauge for shaping a piece of work" is first recorded 1819 in this form, earlier temple (1680s); the form was altered mid-19c., probably influenced by plate [Barnhart], but the pronunciation did not begin to shift until more recently (templet is still the primary entry for the word in Century Dictionary).

Prior to the use of the term for software, engineers were familiar with "templates" as pieces of plastic used for drawing figures. Eg, one might have one template with cutouts to draw the English alphabet, another with cutouts to draw elements of an electrical circuit. (I used both in the 70s, before I ever heard of software templates.)

"Boilerplate" is usually associated with text that can be reused. It can have variables that you can change, but the overall content, structure, and at times text formatting are predefined or fixed. This comes in handy when you want consistency across a large number of documents. (I am talking from a generic perspective; not specific to coding.)

A template includes so much more than text. Like in your example, an HTML template might include a color palette, CSS style sheet, and also boilerplate text (if required).

Not the answer you're looking for? Browse other questions tagged grammar philology or ask your own question.

28
"Criteria" versus "criterion"
6
Can quoted (i.e. citation) text retain its original sentiment?
0
'Evolves into' versus 'evolves to'
1
Wrong usage of "versus"