Is the expression “jam-packed” of American origin?

I came across this expression at random, and when reading its definition and reading it in within context, it struck me as a particularly American thing to say. When trying to confirm my suspicion, I couldn't find this kind of information on its origin (merely that it formed in the 18th century and is the merging of two other words). I tried looking on the Merriam Webster site and Cambridge Dictionary (online) and didn't find an origin section that'd specify in which continent or country this expression was first used. Anyone knowledgeable?

The earliest use of jam-packed I have been able to find occurs in a review of a children’s program — the finale was an “emblematic representation of the majesty of Britannia” — in late 19th c. Cardiff:

I turned in last night at the Park-hall the place was jam-packed — a word specially coined for a special occasion, and the heat was suffocating. — “Observer,” “Notes” (column), Evening Express (Cardiff), 1 Dec. 1892.

When an author wishes to indicate a new coinage, the usual choice is simply to bracket it with quotation marks, especially if its meaning is obvious. A long appositive such as this one suggests jam-packed is still warm from the oven.

The first attestation in an American source occurs in a short story syndicated to a number of newspapers — not by an American, but by the popular Scottish author Samuel Rutherford Crocket:

“Jam-packed it was at ony rate when Marget an’ Archie got there. They were squeezed like herrings, and it was as warm as lying on your back in the pit an’ howking at the roof. — Samuel Rutherford Crocket, “That Popish Parson Fellow” [short story], The Times (Richmond VA), 24 Nov. 1895.

Written in the Lowland Scots eye dialect for which Crocket was noted, the story would be the last place one would look for an Americanism. The story also appeared in February 1896 in the Pocket Magazine and finally in a collection of Crocket’s short stories, Love Idylls, published in London in 1901. It is perhaps this publication that gave the Online Etymological Dictionary or its source a 1901 date for the first appearance of the word.

Whatever the case, the Scotsman Crocket and the anonymous Cardiff “Observer” prohibit otherwise straight linguistic lines from North America to the United Kingdom which the sightings of jam-packed in American sources after the turn of the century would suggest. After these two uses, British sources seem to go silent until the end of the 1910s.

In the year Crocket’s story collection went to press, however, a bit of filler appeared in at least two American publications:

Don't crowd your advertisements with matter and make them hard to read. A plain, readable, inviting advertisement is like a seat in the orchestra circle; a jam-packed, illegible one like space in the peanut gallery. — Current Advertising, v. 9 (Jan.-June 1901), The American Stationer v. 49, No. 1, 5 Jan. 1901.

While jam-packed doesn’t become especially frequent in the US until the mid-1920s and later, its use is spreading across the country: 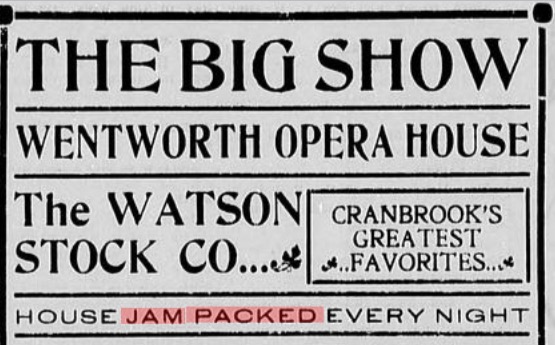 “Well, take the Perryville church, for instance. There's one that has some life to it! Ice Cream Socials and Strawberry Festivals and Pie Apple Parties and Turkey Dinners and Oyster Bay Clubs and Leap Year Leagues and what not, and what not! They gave one of these here Country Schools last fall, and the church was jam packed to the doors!” — The Lutheran Companion (Rock Island IL), v. 20, No. 11, 16 March 1912.

If the word appears in an official publication of the Evangelical Lutheran Augustana Synod of North America, overwhelmingly composed of Swedish immigrants and their descendants in the Midwest, then jam-packed has truly arrived in American English.

What stands out in these examples is that except for the filler about advertising and the ad itself, jam-packed appears in works of fiction imitating, as in Crocket, everyday, informal speech. The speaker in the church publication is merely a slangy straw man invented to be set to rights by an older Swedish Lutheran that social events are not the main mission of the church.

The first appearance in an Australian newspaper, at least among those digitized by the National Library of Australia, occurs in a Melbourne paper:

The Department has been assiduously pointing to its receipts on that afternoon, to prove that there was no extraordinary tram traffic, and just as persistently ignoring the plain fact that huge numbers of fares were uncollected on the jam-packed trams. — “In the Harbour City,” Punch (Melbourne), 6 May 1915.

And in 1919 Northern Ireland, a headline proclaims

Across the United Kingdom, in the 1940s, jam-packed has 37 hits in the British Newspaper Archives (BNA) especially in articles about American films, most likely echoing Hollywood publicity. Each decade until 1980 has over a hundred hits, the 80s only 69, but 1,167 in the 1990s. Despite Crocket, there are no other Scottish sources from his time and thereafter that would suggest that jam-packed was particularly common in Scotland.

Your question concerns the first attestation of jam-packed. That was answered by the first few paragraphs of my answer: Cardiff and a Scottish author publishing in American newspapers. Given the limits of what from this period is digitized and what is not, and that beyond its use in advertising, jam-packed was a slang expression not likely to appear often in print, evidence for a clear line across the Atlantic, however, is at best ambiguous.

While it is hardly difficult to draw linguistic lines from Scotland to Northern Ireland, one might expect the BNA to contain a few Scottish newspapers that use the expression at the turn of the century. Perhaps someone with access to the Scottich National Library digital holdings might have better luck.

It is, however, difficult to imagine that Crocket, despite his popularity in America, is the source of the word in North America. Jammed and packed were a common collocation:

To pass from Broadway, with its empty stages and almost deserted sidewalks, into the crowded, heated, jammed, packed Bell and Everett club room, was something like paddling one’s canoe out of a quiet trout stream into the roar and crash of Niagara… The New York Herald (NYC), 7 Nov. 1860.

Jam followed by a participial phrase headed by packed was also not uncommon:

Look at them ram jam, packed in like sardines in a box, or pins in their papers, stiﬂing with heat, panting for breath, listening eagerly and attentively to the impassioned utterances of a hired speaker. — America, a journal for Americans v.1, Apr.–Sept. 1888.

In other words, it is not outside the realm of possibility that jam-packed arose independently on both sides of the Atlantic without initial influence one way or the other. More pre-1900 attestations might add clarity, but these, if they exist, are not currently available online.

In moderate to rapid informal speech, to avoid the “reset” necessary to pronounce the following p, the d following the collocation jammed packed would likely be elided, as in red and purple. The result would be jam packed, which may ultimately be the independent source for both Crocket and the American usage. All jam, packed would require is a bit of reparsing and dropping the rhyming reduplication.

According to the OED, the adverbial and adjectival use of jam is U.S. in origin, attested from the early 19th century. I can't remember the last time I've heard jam-packed outside of a radio commercial or a movie depiction of a carnival barker, but I don't have good information on its prevalence or distribution.

The OED's etymological trail starts with the onomatopoeic verb jam meaning to force, squeeze, press, crush, stick, thrust, etc. something into a confined space. Something which is in close contact with or right up to something is thus jam up to it (or just jam), though this sounds somewhat old-fashioned or dialectical to me.

Also they had poll watchers from both sides in those days who sat jam up close to the ballot box with a list of voters on a clipboard. — from Ferrol Sams' Down Town (2008)

1835 David Crockett An Account of Col. Crockett's Tour 192. [Andrew Jackson] went jam up for war; but the cabinet got him down to half heat. 1858 Samuel A. Hammett Piney Woods Tavern xiv. 146. The regular stage was jam full, and there was an extra put on, and that was jam full, and a leetle more.

Jam-packed is just a novel variation on jam-full, meaning tightly packed. The OED's earliest written attestation is from Ring Lardner, an American sportswriter, in 1925

Liberty 28 Mar. 5/1. This place is jam-packed Saturdays, from four o'clock on.

but a search on Google Books turns up earlier examples, like a line from The Madness of Philip and Other Tales of Childhood by Josephine Dodge Daskam, published 1902:

You don't look like the ones you tell about, anyway! Why… your hair's red, red! An' your eyes are kind o'green, they are! An' you're just jam-packed full o' freckles!

The verb form jam-pack is thus a back-formation from jam-packed.