A word that combines the feeling of euphoria and intense, bone-deep fear

I'm trying to describe a god through the eyes of a devout follower. I've tried using awesome because I tend to use it for scenarios like this (ie. describing something beautiful and horrifying), but it doesn't quite fit. I need something that says "this is magnificent and terrible in equal measures". I feel like I could find the answer in one of lovecraft's novels, but I'm not sure where to even start. Could someone suggest a way to convey the way I'd be using awesome? I'd like it to be clear I'm using it in the traditional sense and not the new (ish) sense.

Sublime defined in the OED as:

Of a feature of nature or art: that fills the mind with a sense of overwhelming grandeur or irresistible power; that inspires awe, great reverence, or other high emotion, by reason of its beauty, vastness, or grandeur.

The sublime is an important concept in 18th- and 19th-cent. aesthetics, closely linked to the Romantic movement. It is often (following Burke's theory of aesthetic categories) contrasted with the beautiful and the picturesque, in the fact that the emotion it evokes in the beholder encompasses an element of terror.

Burke believed that the sublime was something that could provoke terror in the audience, for terror and pain were the strongest of emotions. However, he also believed there was an inherent "pleasure" in this emotion. Anything that is great, infinite or obscure could be an object of terror and the sublime, for there was an element of the unknown about them. Burke finds more than a few instances of terror and the sublime in John Milton's Paradise Lost, in which the figures of Death and Satan are considered sublime.

The word awesome is little bit timeworn or to say, overused over the period of time. If we investigate the etymology of the word, then it has necessary ingredients: "inspiring awe or dread" at the same time. Language pedant will advocate to use it in the same sense. But after 1670s, colloquially people started using it as "impressive, very good"1.

The excerpt from the book demonstrates this idea:What Does God Want from Me?: Learning to Hear God’s Voice By Peggy Merritt Hammond

There was no fear! Just total, awesome peace! It was the most awesome experience of God.

The sense of dread is absent in the above example.

Rather, I'd suggest you to use awe-inspiring as stated below.

Suggested usage: The sight of the God is majestic, awe-inspiriting and wonderful, not ordinary or everyday experience. 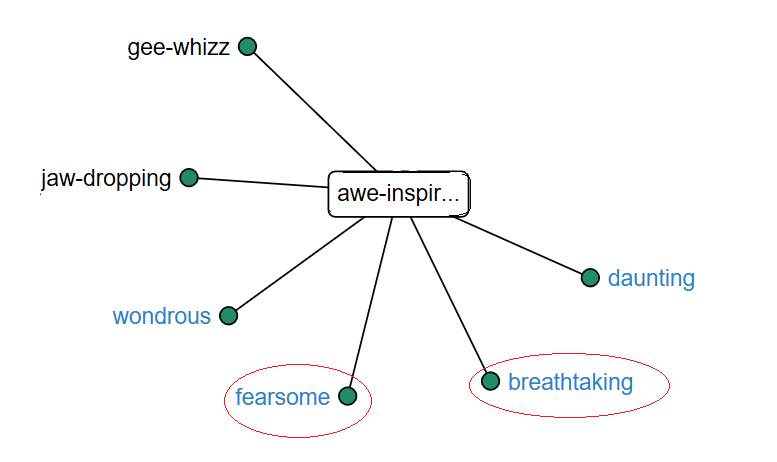 Arousing awe through being impressive or formidable.

Perhaps thrill would be appropriate:

(of an emotion or sensation) pass with a nervous tremor. "the shock of alarm thrilled through her"

This word is often applied to extreme sports (“thrills and spills”) such as sky-diving, which are surely all about being scared to death and euphoric at the same time.

There isn't any exact, single word for the feeling you requested here, as the answers of some fellow users suggest that. Even I googled for the term that denotes such feeling in highly compiled dictionaries, like Oxford, Cambridge and Merriam Webster but not got which I searched for.

If you want to replace fear with other alternative term horror, which denotes an intense feeling of fear, it could be like this:

Personally, I can't think of or find any word that combines the ideas of euphoria and fear, given they are generally so disparate. I even found a list of Lovecraftian vocabulary, and went through them to try to find something that would fit the bill. There are lots of good words for describing terrifying or disgusting things, but nothing that really combines those with euphoria or magnificence. The closest I could find was "stupefying", which helps to have the idea of scale, but doesn't really communicate either the fear or the euphoria properly.

Even "Awesome" is more of a "so grand and above man that it inspires awe" in its classical sense, and while one may fear that which is so much more powerful, I don't think it will easily communicate what you want it to.

So personally, I would go with a pair of words or short phrase (and I believe that is what Lovecraft himself would have done), rather than go for a single word. Actually, I think you already hit on a great way to say it: "magnificent and terrible in equal measure" (no 's', by the way). That, in fact, sounds very Lovecraftian to me. A shorter option would be something like "horrid euphoria".

Not the answer you're looking for? Browse other questions tagged single-word-requests writing or ask your own question.