Is there a technical or semi-technical expression for occasionally misreading words?

I occasionally misread words. I estimate the error rate is roughly one in 25,000 to 50,000 words (roughly 100 pages), or a misread word several times a week.

undeserved: should be underserved

mouse: should be moose

The very low error rate seems to rule out dyslexia, plus I have none of the other symptoms of dyslexia. There is also a condition called Primary progressive aphasia (PPA), but according to the linked article, I don't have PPA.

I'm not looking for a medical diagnosis -- an error rate of 0.004% does not call for that. I suspect that this is a fairly common occurrence in healthy people of all ages who read a lot, so please don't suggest senior moment. :) As I said, I am looking for a technical or semi-technical phrase for this occasional glitch. I think of it as a low frequency distant cousin of the verbal Spoonerism, but in reading, and only sometimes with a predictable pattern of transfer of letters.

I found a great article on Quora called "Why Do I Misread Words?":

Most of us don’t read everything word-for-word, much less letter-for-letter. In fact, in a letter written by Graham Rawlinsin in 1999 (a specialist in child development and educational psychology), he said that:

“randomizing letters in the middle of words had little or no effect on the ability of skilled readers to understand the text."

As an example of this, the article provides this exercise: 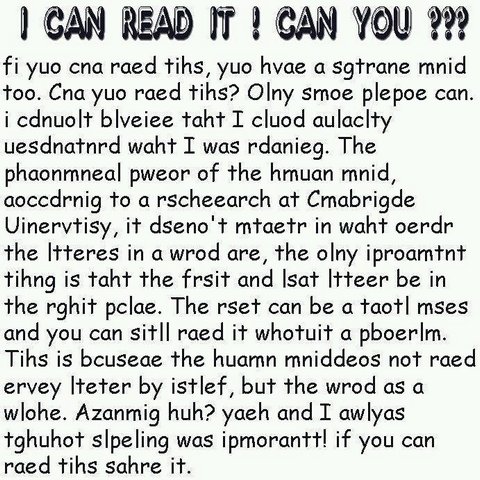 What this demonstrates is that our minds can assume what is being said through context. Although we perceive ourselves to be reading everything one word at a time, this is not always the case.

So, when you "see" the word undeserved, it might actually be that you just assume it to be that because it's a more natural fit for what you're used to reading and for what you have been reading in the sentence up until that point. It's only when you continue past that word, and realize that things aren't making sense, that you back up in order to discover your error.

The Wired article "What's Up With That: Why It's So Hard to Catch Your Own Typos" also discusses this:

Generalization is the hallmark of all higher-level brain functions. It's similar to how our brains build maps of familiar places, compiling the sights, smells, and feel of a route. That mental map frees your brain up to think about other things. Sometimes this works against you, like when you accidentally drive to work on your way to a barbecue, because the route to your friend's house includes a section of your daily commute. We can become blind to details because our brain is operating on instinct. By the time you proof read your own work, your brain already knows the destination.

A good word is used in that passage: generalization. It's this generalization that helps you decipher the gibberish passage above—but which also, sometimes, prevents you from correctly interpreting what you're reading.

I know of no real scientific word for what you've described, but I'm going to call it generalization.

Generalization is one of the reasons that copyeditors need to have their own work edited. I happen to be a copyeditor and I'm very good at spotting problems in other people's work. But while I make fewer mistakes than some others might, I still miss more errors in my own writing that I do in anybody else's.

The reason for this is that when I'm writing, I already know what I intend to say. So, my mind automatically assumes that what I've written is correct. Even after the fact, when I proofread myself, I might still assume that I've written underserved (and read it that way because it's what I expect to read) even though, in actually, my fingers had inadvertently typed undeserved as the more common of the two words.

A word or phrase that results from a mishearing or misinterpretation of another, an element of the original being substituted for one which sounds very similar.

Example: When someone read "tow the line instead of toe the line". 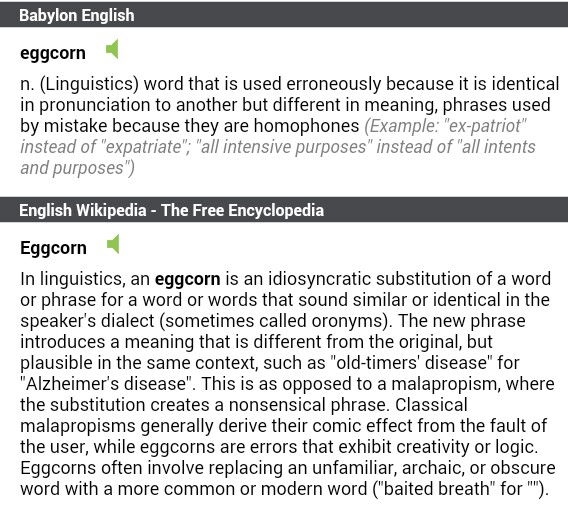 The mistaken use of a word in place of a similar-sounding one, often with an amusing effect.

Example: dance a flamingo’ instead of flamenco. 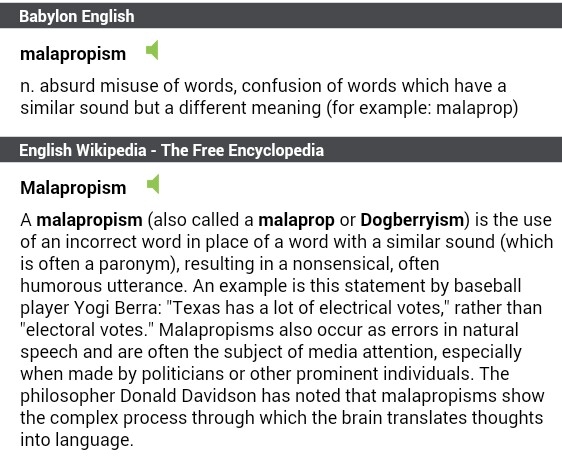 Not the answer you're looking for? Browse other questions tagged single-word-requests expressions phrase-requests terminology or ask your own question.