Let me draw your attention to a question posted in English Language Learners where OP has extracted a text from the book "The Collector" by John Fowles that uses the verb lameduck. I can not find any reference to such verb online.

Violence and force are wrong. If I use violence I descend to his level. It means that I have no real belief in the power of reason, and sympathy and humanity. That I lameduck people only because it flatters me, not because I believe they need my sympathy. I’ve been thinking back to Ladymont, to people I lameducked there. Sally Margison. I lameducked her just to show the Vestal Virgins that I was cleverer than they. That I could get her to do things for me that she wouldn’t do for them. Donald and Piers (because I’ve lameducked him in a sense, too) — but they’re both attractive young men. There were probably hundreds of other people who needed lameducking, my sympathy, far more than those two. And anyway, most girls would have jumped at the chance of lameducking them.

Have any of you got the original book? Does it contain that exact text? In affirmative case, what does that verb mean?

I found a reference to lameduck and the John Fowles' book The Collector in Something and Nothingness: The Fiction of John Updike & John Fowles By John Neary 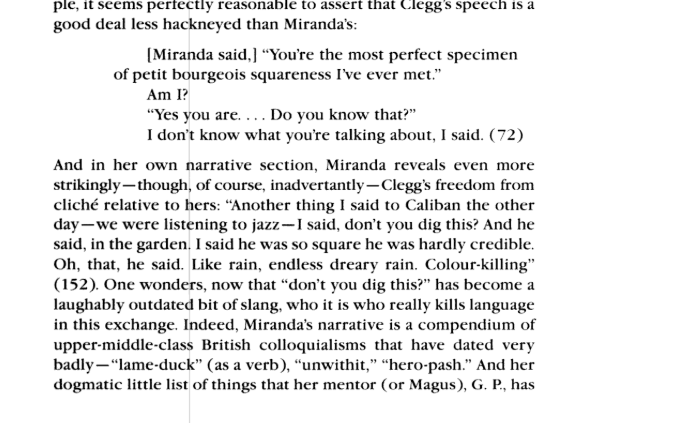 Lame duck as applied to a politician is a North American term, though it is gaining usage across the globe.

The first American president referred to as a lame duck was Calvin Coolidge.

The phrase lame duck may also be used to describe an ineffectual person.

Lame duck originated on the London Stock Market in the 1700s to describe an investor who is unable to cover his debts, the plural form is lame ducks.

Lame duck is spelled with a hyphen as in lame-duck when used as an adjective before a noun about half the time.

Merriam-Webster's second definition for the word is:

chiefly British : a person, company, etc., that is weak or unsuccessful and needs help

In the story Miranda Grey is kept captive by the protagonist Frederick Clegg. He is from a lower social class than Miranda, perhaps lameducking is the act of putting someone down in the context of the quote in OPs question?

A contributor to New Casebook Series:John Fowles edited by James Acheson seems to confirm this interpretation 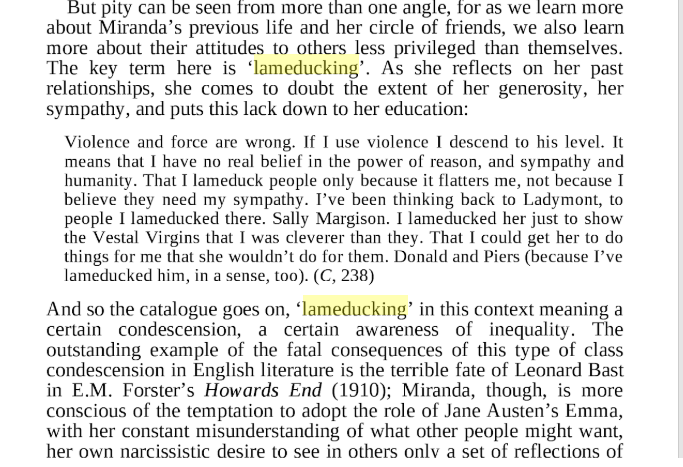 From this essay on the book

He admits that he made a mistake setting his sights on Miranda as she was of a higher social class than he: “… she’s only an ordinary common shop-girl, but that was my mistake before, aiming too high” (Fowles 282) and so if he were to have a new guest, it would be someone who would respect him and who would learn from him, instead of the other way round as it was between Frederick and Miranda: “I ought to have got someone who would respect me more. Someone ordinary I could teach” (Fowles 282). This is a conclusion he comes to after he has read Miranda’s diary and finds out that she never really loved him and felt superior to him.

Miranda feels sorry for him, but at the same time, she has the feeling that she should not