Word for: A river than splits into two, later rejoining into one? (fluvial terminology)

Is there a word that combines both structures, the idea of a river that splits in two and later rejoins to become one river again?

An anabranch is a section of a river or stream that diverts from the main channel or stem of the watercourse and rejoins the main stem downstream.
Anabranch Wikipedia article

There is also the term "anastomose" which is used in a number of fields. It means to come together, and is used to refer to river streams and blood vessels for example.

Anastomosing streams consist of multiple channels that divide and reconnect and are separated by semi-permanent banks formed of cohesive material, such that they are unlikely to migrate from one channel position to another.
Anastomosis

I believe that the anabranch is one stream that breaks off, and the whole, that is, the main watercourse together with its anabranching streams which come together at a later point is an "anastomosing river".

Anastomosing streams consist of multiple channels that divide and reconnect and are separated by semi-permanent banks formed of cohesive material, such that they are unlikely to migrate from one channel position to another. ... The term anabranch has been used for segments of anastamosing rivers. 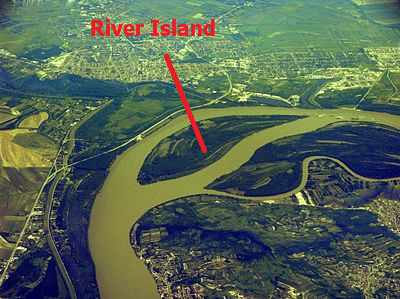 The words: anabranch, braided river or anastomosing stream talks about small branches of river which splits into single or multiples branch(es) and later flow again into the river.

NOTE: Also, please read the upvoted comment of James. It has a nice suggestion.

Not the answer you're looking for? Browse other questions tagged terminology technical science or ask your own question.

1
Term for 'branching into separate parts and then recombining'

6
What is a word called that has more than one syllable?
11
Is the term “ice cream” considered one word or two?
14
Is there a word to name being unable to think of “proper terminology” for something?
7
One word for “temperature” and “humidity”
2
What is the name/terminology for these two types of knowledge?
1
One word for bounced/dropped email address, besides “invalid”
0
Is there a word for when you hear what you want to hear rather than the word(s) one actually said to you?
2
Is there a term for words which are the opposites of more than one word
0
One word for 'pyramid' communication
0
Is there a terminology for “one word, multiple distinct etymologies”?