Does the word "sympathizer" have a negative connotation?

Recently, at my work, there was an email which talked about the "LGBT sympathizers" community. What the author wanted to say is the "friends of the LGBT community".

Technically speaking it seems that his choice of the word "sympathizer" is not wrong, but (to me) it feels that it has a negative connotation, nowadays.

The Oxford English Dictionary only has quotes from over 100 years ago (since this page hasn't been updated), and they're mostly positive. For example:

Our Balkan allies and sympathizers.
The Times literary supplement, March 14, 1918

However, that's not the entire story, since a lot can change in 100 years. In this case, it looks like the word did a 180. I did a search in the Corpus of Contemporary American English (which has "20 million words [from] each year 1990-2017") for * sympathizer, which shows which words are used most often right before "sympathizer". The number is how many hits were found in the corpus:

Without getting too political here, this list heavily supports the idea that "sympathizer" has a negative connotation. It's almost exclusively a list of enemies of the US (from various points in time). "Confederate" and "southern" (which both refer to the same thing) are mostly negative because they're the losing party that supported slavery in the American Civil War (plus several quotes are referring to John Wilkes Booth, who assassinated Lincoln). However, "a sympathizer" and "rebel sympathizer" have both hits that are obviously negative and hits that aren't so clear cut, (e.g. "a rebel sympathizer at the Libyan Youth Movement" isn't clearly positive, but it's not clearly negative to me either).

However, consider the following. (This is so weird, the search results keep changing every time I search). If I search for "sympathiser", I get some interesting results. In (Bing) the sixth result was the Wikipedia article for Nazism. When I entered Wikipedia at the top of the article it said "redirected from Nazi sympathiser". Another time when I tried it was the last result on the second page. Another search I did on Bing showed as second result on the first page an article titled "Terrorism sympathiser released despite tough new laws", and the 8th result was "Broadmeadows murder: Islamic State sympathiser sentenced".

When I switched to Google I saw nothing negative on the first page, but on the second page I got articles about terrorist sympathisers. Just to show you I'm not going mad, here's a screenshot of the third Google result page: 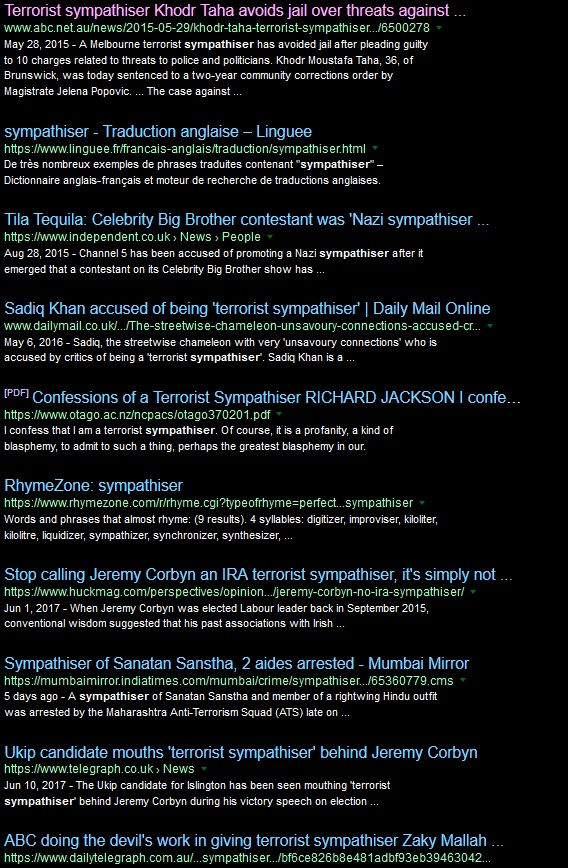 You'll see it's chock-full of articles on terrorist sympathisers, some Islamic extremists, some Irish Republican Army, some Nazi.

In one instance on the first page I got communist sympathisers, but of course it's not there anymore because the internet is trying to make me look crazy.

I mentioned the dictionary definitions were neutral, but it's interesting what Oxford Living Dictionaries actually provides as its main example:

sympathizer
noun
A person who agrees with or supports a sentiment, opinion, or ideology.
‘a Nazi sympathizer’
Oxford Living Dictionaries

It's pretty interesting looking through examples in dictionaries, they are quite often negative, and very often political.

I was quite surprised just how many results I got with negative connotations. The uses of "sympathiser" specifically, by that I mean sympathise inflected with the agentive suffix, seems to very often be politically related.

I'm not sure why this is the case. A guess would be it's because there's often no need to call someone out as a disabled persons sympathiser, or abandoned children sympathiser, or animal cruelty sympathiser, because to sympathise with these things is near universal. My guess is that its use would arise as a rhetorical attack on someone for sharing the values of a group considered disreputable.

However strictly speaking the word is neutral, and its use in your email is not strange in the least, I don't think.

Not the answer you're looking for? Browse other questions tagged meaning connotation sexual-minorities or ask your own question.