I am searching for a word or phrase that describes reflected light, dancing light etc [duplicate]

Ask Question
Asked 2 years, 5 months ago
Active 2 years, 5 months ago
Viewed 4k times
8
This question already has answers here:
English equivalent of komorebi (木漏れ日) — “sunshine filtering through leaves” (10 answers)
What do you call a dancing sunbeam? (3 answers)
Is There a Word for the Spot on the Floor at the end of a Sunbeam? (2 answers)
Closed 2 years ago.

I am trying to find a word or short phrase that conveys the idea of reflected light, dancing light, flickering light. It is for an artistic project to name an artwork piece I am constructing where light throws patterns and colours onto a wall or surface through transparent colored film.

intr.v.
1. To give forth flashes of light; sparkle and glitter: diamonds coruscating in the candlelight.
American Heritage Dictionary

verb
literary
(of light) flash or sparkle.
‘the light was coruscating through the walls’
Oxford Living Dictionaries (Thanks to ubi hatt for getting this definition)

If you're familiar with Star Wars lore, you may have heard of a planet called Coruscant, which is the adjective form of the word.

Similar and simpler words like glimmer and sparkle may mean the same thing. I'm unsure if you need something that specifically means reflectance and projection of light onto objects (walls), as you mentioned. If so, none of these words capture all of that I'm afraid. I doubt there'd be one word that would encompass all of those meanings.

Given that many of these words are so similar, it may come down to whichever word you think sounds nicer.

You mention reflected light but note later that the light will be transmitted through a film. Therefore, you may find the term kaleidoscopic useful; the term most specifically describes a assemblage of different and varying colors, and the origin of course is the kaleidoscope, an optical instrument that could employ either reflection or transmission or both. 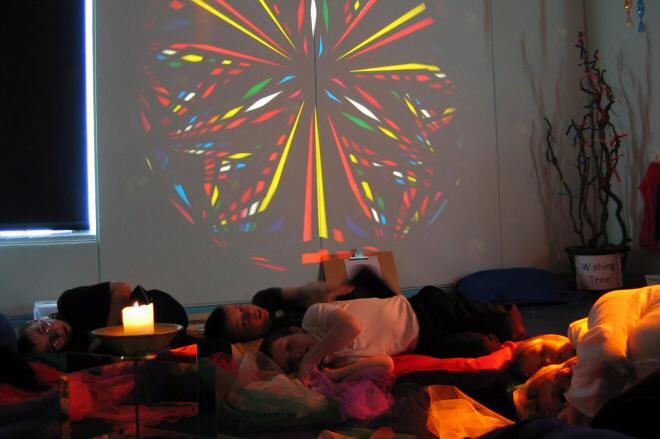 The rippling patterns of light you get, for example, at the bottom of a swimming pool are called caustics:

In optics, a caustic or caustic network1 is the envelope of light rays reflected or refracted by a curved surface or object, or the projection of that envelope of rays on another surface.

It seems that reflected is a word you've already ruled out—perhaps because you're passing light through another medium.

In which case, the light could be considered to be refracted or filtered.

1 a : to subject (something, such as a ray of light) to REFRACTON

1 : deflection from a straight path undergone by a light ray or energy wave in passing obliquely from one medium (such as air) into another (such as glass) in which its velocity is different

1 : to subject to the action of a filter

2 a : a device or material for suppressing or minimizing waves or oscillations of certain frequencies (as of electricity, light, or sound)
b : a transparent material (such as colored glass) that absorbs light of certain wavelengths or colors selectively and is used for modifying light that reaches a sensitized photographic material — called also color filter

Alternatively, if you're not talking about the technique but the end result that shows moving light patterns, then you are describing animated light:

One term for this is dappled (Cambridge). Sunlight passing through rustling leaves gives a dappled light.

1 a : to shine faintly or unsteadily - The candles glimmered in the windows.

1 b : to give off a subdued unsteady reflection - Her white satin dress glimmered in the dusk.

2 : to appear indistinctly with a faintly luminous quality

It's not exactly dancing as you requested, but it implies unsteady - «marked by change or fluctuation; not uniform or even»

1 : to shine with a soft tremulous or fitful light : glimmer 2 : to reflect a wavering sometimes distorted visual image

transitive verb : to cause to shimmer

The word flitter might suit your project. It doesn't indicate light but the word itself has a nice rhythm, lightness and sense of movement.

26
English equivalent of komorebi (木漏れ日) — “sunshine filtering through leaves”
7
Is There a Word for the Spot on the Floor at the end of a Sunbeam?
2
What do you call a dancing sunbeam?