What’s the name for Gary and Harry’s blood relationship?

Imagine that Gary and Harry are these two guys in a hypothetical family, described in English below and in this diagram represented by the green cells at the bottom: 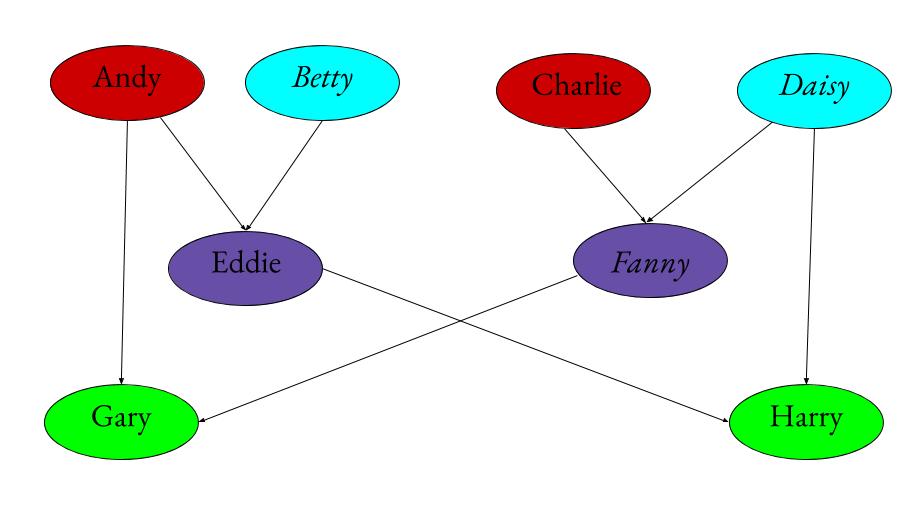 As you see, Gary and Harry are related to each other by blood, so one is the other’s something or other. What I want to know here is what that something is. That way Gary could tell someone that “his _______ Harry stopped by the other day”, or vice versa.

In other words, is there a word — or words — that fit these two blanks?

Here’s their family tree, which starts with two couples, Andy and Betty on one hand and Charlie and Daisy on the other, in which none of the four is related to any other of the four by blood, only by marriage alone.

Given that Andy is Gary’s father and Harry’s grandfather, and Daisy is Harry’s mother and Gary’s grandmother, Gary and Harry are definitely related to each other — but how?

While I realize that not all extended, by-marriage family relationships have a name for them in English that do have a word for them in other cultures, that’s not what I’m talking about here. These are for people who actually share blood with each other, so you would think some combination of cousin or uncle or nephew or grandson would work here.

Here’s that diagram again in case in helps to see it closer to the English description.

This idea and original diagram from F.M. Lancaster’s Genetic and Quantitative Aspects of Genealogy: Types of Collateral Relationships

You'd talk about the father's side and mother's side separately. (Credit @JoshRagem's half-uncle / half-nephew idea.)

An uncle is the brother, half-brother, step-brother, or brother-in-law of one's parent, or the husband of one's aunt. - wikipedia

So Harry is Gary's paternal (half-)nephew on his father's side and (half-)uncle on his mother's side.

Correspondingly, Gary is Harry's (half-)nephew on his mother's side and (half-)uncle on his father's side.

Based on some comments of the question itself, I'm going to pose this as a possible answer.

Purely on the final result of the "family tree" we have the following analysis:

The same relationship can be given if analyzed from Harry's perspective:

So, Gary is Harry's uncle and Harry is Gary's uncle. This makes them both each other's uncle.

Transitively, this also makes them each other's nephew.

In incestuous relationships, one person can be labelled with two different relationships to somebody. For instance, where a mother and son produce a daughter, the mother is both mother and grandmother to the daughter.

In this question, there is nothing incestuous happening. However, because of the divorces and marriages, it has the same kind of sense.

The divorces and marriages may or may not cause some additional confusion. In my analysis above, I only traced each person's genealogy through a single parent relationship.

I'm not completely certain if this makes them half-uncles (and half-nephews) or not.

It's also possible that there are some additional half- or step- terms that could be used. But my brain holds up a white flag at this point and won't keep going . . .

Adding on to the above answer:

If I were watching a British tv show, I would absolutely expect them to say “my half-uncle Gary came by today?”...”well he is my half-nephew too”. Bonus word play for 50% uncle 50% nephew