How does “aboriginal” mean “unsophisticated”?

A list of SAT vocabulary words from www.FreeVocabulary.com gives the following definition for the word aboriginal:

I know that aboriginal means a person or group of people who have been living beforehand or the first people to live in a certain region. How does it mean "unsophisticated"?

a. First or earliest as recorded by history; present from the beginning; primitive. Of peoples, plants, and animals: inhabiting or existing in a land from earliest times; strictly native, indigenous.

b. Frequently with initial capital. Of, relating to, or characteristic of the Aborigines of Australia or their languages.

b. Also with capital initial. Inhabiting or occupying a country before the arrival of European colonists and those whom they introduced.

Not sophisticated in habits, manners, or mind; natural, ingenuous, inexperienced. Not tampered with, altered, or falsified; uncorrupted, genuine. Unmixed, unadulterated.

Speaking of aboriginal peoples: unsophisticated only in a sense of comparison to other collections of humans at the time. The Oxford English Dictionary does not use the word, and there is no sense of disparagement in its definitions.

The association of terms like “native” and “aboriginal” became associated with unsophisticated and savage because of the prevalent ethnocentrism of the Imperial age (primarily 16th to 18th century European history, however may be considered to extend into 19th to early 20th century European and USA history).

Whether calling them aborigines, natives, or savages; the prevalent rationale was that the cultural, scientific, industrial, legal and social achievements of Continental Europe exemplified the highest achievements of humanity. This engendered a discriminatory attitude to those societies that function without these same advancements.

I believe history shows that the “enlightened” could be judge at least as “savage”, if not more, than any culture they judged; consider the Slave Trade, the Trail of Tear, and the destruction of South American cultures (Maya, Inca, Aztec) by Spanish conquistadors, the subjugation of India, the subjugation of Vietnam, the subdivision of the entire African continent, etc.

However “aboriginal” in its own primary definition is more akin to “native”, rather than the engender “savage”.

Referring to the etymology, the Latin root really implies just the original inhabitants. 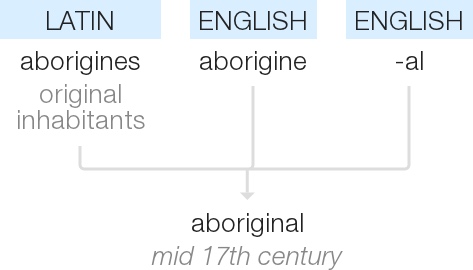 Not the answer you're looking for? Browse other questions tagged meaning word-usage adjectives american-english or ask your own question.

7
Does “carnival barker” mean the opposite of “barker”?
3
What does “military profile” mean?
3
Why CIA’s operation directed to suspicious people associated with terrorist group is called “Signature strike”
2
What does “personally identifiable” mean
2
What is the distinction between notion and idea
1
What does “six point something” mean?
0
What does “inhabit a different person’s skin” mean?
3
Does æ differ or not (American English)?
6
Why does master mean 'man' and 'boy'?
2
What does “drunch” mean?