How to say "I must nothing" on a t-shirt

My son has a t-shirt that says, in Polish, "Nic nie muszę". It translates literally as "Nothing (I do) not must", meaning something like I do not have to do anything.

How would you express this in English (for a t-shirt, not as an official prime minister's statement)?

If this is for a rebellious teenager's shirt, You can't make me would probably be the most defiant (and still family-friendly) version of "I don't have to do anything."

Alternatively, you could expand the phrase to I don't have to do anything I don't want to do, but it seems a bit unwieldy for a shirt. (Maybe just saying I don't have to would be sufficient to get the idea across, but it might leave some passers-by wondering.)

You could also make it a bit more slang-ish with something like don't gotta do nothing (though note that this isn't technically a grammatically correct phrase, and probably wouldn't be said by an official). 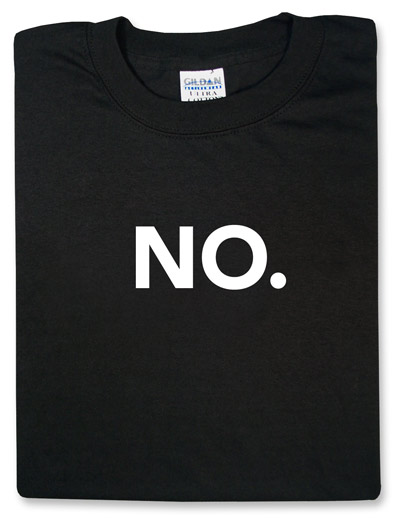 It sounds to me like even in Polish it won't mean much to anybody who doesn't know that the Prime Minister said it, and the context in which he did. Once you move to English-speaking places, you've pretty much exhausted the pool of people who would appreciate the reference.

My suggestion would be to leave it in Polish on your putative T-Shirt. At least that way, readers would know its a refernce to something that happened in Poland. I used to see T-Shirts with Solidarność printed on them all over the place here in the USA back in the 80's.

You are not the boss of me.

He's the boss, no one can make him do anything.

For a trendy twist, consider the single word: Slacker.

Means, "one who doesn't do anything."

3
How do you say to "connect nails with heads"?
7
What is the origin of "alrighty"?
5
Can "must not" be used alternately to "can't" in AE to say that sth is logically impossible?
8
English equivalent for the Persian expression "To keep one's face red with slap"
3
Meaning of "They say! What say they? Let them say."
1
Idiom or saying for "nothing is bad without being good for something"
1
A more eloquent way to say “messed up”