Origin of “the apple doesn’t fall far from the tree”

According to the following source the adage The apple doesn't fall far from the tree originated in AmE in the first half of the 19th century:

The first recorded use in the USA was by Ralph Waldo Emerson in 1839, one of America's best known 19th century figures.

But they also add that:

Versions of this proverb can also be found earlier in works written in German and Russian; with some sources saying the expression originates in Asia. (www.bookbrowse.com)

As for its possible German origin, I could find the the following test from 1842 The Exercises for writing German - Page 14 by Johann Gerhard Tiarks - where they state that:

"The apple does not fall far from the stem," is a German proverb.

But what is more interesting, in A Dictionary of the Welsh Language, Explained in English dated 1803 under the term Avall (apple) they quote:

Ni fell zygwyz aval o avall; the apple will not fall far from the tree, (adage).

The Welsh quote is the earliest I could find, but it just seems to make my research more complicated.

So, where does the above adage really come from? Is is ultimately of Asian origin as suggested in one cited source?

Was its earliest usage in AmE as suggested, or does the Welsh dictionary proves otherwise a possible BrE first usage before it crossed the pond?

This proverb definitely shows up well before the dates you quote, at least in languages other than English. (Specifically, the year 1585.) The best source for information on this is Richard Jente's German Proverbs from the Orient, which is one source that believes that it's originally "eastern":

The best evidence of the eastern source of our proverb seems to be the above quoted citation from Megiserus of the year 1605, and it is still a proverb common in the Turkish: elmá gendý aghadschindán irák düschméz, which literally is: "The apple does not fall far from its own tree."

(I'm personally not convinced that it comes from "the orient" since none of the examples he gives are from the orient itself.)

The earliest appearance in the German collections is from the year 1585: Der Apfel fellt nicht gerne weit vom Baume.

(This Google Translates as "The apple does not like to fall far from the tree".)

From the OED, it lists two quotes in square brackets which means they are "relevant to the development of a sense but not directly illustrative of it":

Traces still exist in the daily language of the Icelanders, for instance in the proverb, eplit fellr ekki lánt frá eikinni the apple falls not far from the tree (the oak!).
A Grammar of the Anglo-Saxon Tongue: with a Praxis, 1830

The other quote is the 1839 Emerson quote, which the OED notes is likely from the German "der Apfel fällt nicht weit von Stamm".

The first real quotation it lists for the entry is the following:

‘The apple’, as the Danes say, ‘had not fallen far from the tree’; the imp was in every respect the counterpart of the father.
The bible in Spain, 1843

Do note, however, that there is a very similar proverb that showed up earlier in English. According to Jente it's "another medieval proverb which might be associated with ours, but [...] has nothing directly to do with it". Here it is:

[Modern English] The apple never rolls so far that it does not make known whence it came.
British Library, Cotton Faustina A X; quoted in Maxims in Old English Poetry

For the sake of completeness, there's a recorded use of the proverb in Russian in 1825, in Alexander Pushkin's Boris Godunov play:

FIRST PERSON. The father was a villain, but the children are innocent. SECOND PERSON. The apple does not fall far from the apple-tree.

This shows that the saying was not a novelty, was clear to the audience, and was already used in a proverbial sense.

An early 1842 newspaper clipping attributes the phrase as a Danish saying:

"Amongst those of the snowy linen who most particularly attracted my attention, were a father and son; the former was a tall athletic figure of about thirty, by profession a house-breaker, and celebrated throughout Madrid for the peculiar dexterity which he exhibited in his calling. He was now in prison for a rather atrocious murder committed in the dead of night, in a house at Caramanchel, in which his only accomplice was his son, a child under seven years of age. 'The apple,' as the Danes say, 'had not fallen far from the tree.'

Following that clue, I searched for examples of the proverb in Danish, and did find this clipping from 1792. 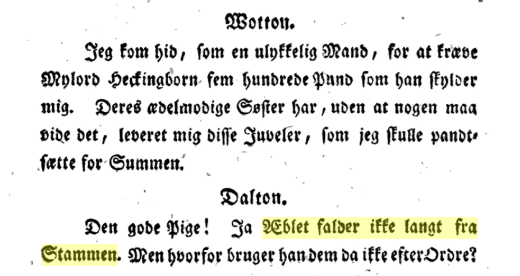 Translation: The Apple does not fall far from the tree.

You can follow the link to Google Books where the front cover confirms that the date is not in error.

The earliest mention of the proverb (cited as a German saying) that I've been able to find in an English text is this one in Nathan Bailey, Dictionarium Britannicum: Or a More Compleat Universal Etymological English Ditionary, second edition (1736):

Ralph Waldo Emerson uses the word stem (rather than tree) of the expression in the letter to his aunt, Mary Moody Emerson, of December 22, 1839, noted in lbf's answer as the earliest recorded occurrence in English of the phrase, according to the OED. From The Selected Letters of Ralph Waldo Emerson (1997):

Her departure will cut one of your own ties to your present abode, and as men say the apple never falls far from the stem, I shall hope that another year will draw your eyes & steps to this old dear odious haunt of the race[.]

This echo of the German Stamme raises the possibility that Emerson might have heard the saying from English speakers who learned it in translation from German immigrants to America. The multiple instances (going back to 1736) where English reference works have cited versions of the expression from German provide circumstantial evidence that the expression entered English from German—perhaps multiple times before finally becoming naturalized.

the apple never falls far from the tree:

a person inevitably shares traits with or resembles his or her parents or family.

OED R. W. Emerson Let. 22 Dec. (1839) II. 243 As men say the apple never falls far from the stem, I shall hope that another year will draw your eyes and steps to this old dear odious haunt of the race.]

Agree, this is earliest in AmE according to OED, but Mr. E admits to hearing of it ... somewhere.

Not the answer you're looking for? Browse other questions tagged etymology american-english british-english proverbs or ask your own question.

0
"son of fish knows how to swim" meaning and usage

7
An apple a day keeps the doctor away
5
Who is the author of "Absence makes the heart grow fonder"?
5
Did Sir Arthur Conan Doyle coin the proverb "A change is as good as a rest"?
4
"In the cards", "on the cards" origin(s)
1
The origin of "two is company, three is a crowd"
16
Origin of the slang AmE and BrE usage of "beef"
2
Phrase-origin for "Clear as Mud?"
9
Origin of the phrase "barking mad"
8
Origin of “the grass is always greener”
16
What’s the British English for “shotgun wedding”?