Where does the expression “green wave” come from?

"Green wave" is an idiomatic expression used in traffic circulation that refers to:

A green wave occurs when a series of traffic lights (usually three or more) are coordinated to allow continuous traffic flow over several intersections in one main direction. 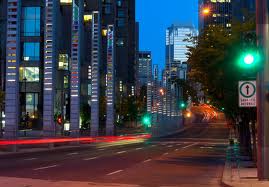 Where does “green wave” come from. Was it originally a foreign expression adopted by English speaking countries, or was it coined in English and then spread abroad?

The earliest use I could find in English of 'green wave', with the sense of "coordinated traffic signals", ascribes the origin of the phrase to Germany, and refers to streetcar railway operations in 1927 Chicago:

"the term Green wave has also been applied to railroad travel. For several years starting in the 1960s, the German Federal Railway maintained an advertising campaign featuring the slogan garantiert grüne Welle (Guaranteed Green Wave), which communicated the notion of speed, limited delays and open track blocks to potential customers choosing between train and automobile travel, and was featured prominently in promotional materials ranging from posters to radio jingles."

"Henry A. Barnes (December 16, 1906 – September 1968) was an American traffic engineer and commissioner who served in many cities, including Flint, Michigan; Denver, Colorado; Baltimore, Maryland; and New York City. Barnes was responsible for many innovations in applied traffic engineering, including the Green Wave of coordinated traffic signals..."

"During 1965, there was a substantial increase in the application of signalling systems in Croatia, since the company "Nikola Tesla" started to use their own capacities to develop and produce the devices for independent, detecting and co-ordinated control. In 1965, the first "green wave" (phased traffic lights) was installed along the Brace Kavurica Street, controlling traffic by the devices produced in the above mentioned company. The exchange which coordinated the operation of devices was installed in the police building in Dordiceva street. By extending the zone to the two neighbouring directions, two "green waves" (phased traffic lights) were formed in the opposite direction. The main exchange was moved to Marticeva Street. Today, there is a new microprocessing zone exchange which controls all the local signalling devices in the city centre. "

It's a commuter's dream: The avenue is thick with traffic, but green lights appear with regularity. Traffic flows smoothly, and lane changing is minimal. Tailgating is rare. When a red light does appear, no one tries to sneak through. Driving seems almost ... civilized.

It sounds like a miracle, but it may just be another success story resulting from traffic signal management, one of the most cost-effective ways of keeping traffic moving smoothly and making streets safer.

In Am spoken English typically called traffic light synchronization. Green wave appears to be of Eu origin. I could find no expression origin.

Each country developed the phrase independently.

Language adaptations come from the environment of which the language is spoken. And the internetz has proven how adaptive our language is.

After motor vehicle transport becoming an international norm; whose to say that the luck of riding a green wave would not present itself?

Each country has coastal exposure giving ground to have a word to describe the movement of a wave and a green light is the universal colour to communicate continuing traffic movement.

Given those circumstances I do not think it necessary that the phrase had to have physical vectors of people who used the phrase to spread, but it was possible to independently develop the phrase as the culture had already pollinated via the spread of transport technology.

Long shot. A fun concept to ponder. I look forward to hearing the answer.