Does this OED citation of "third-rate," and the origin of the idiomatic term, relate to the British Royal Navy?

According to Wikipedia, this site, and etymonline, third-rate derives from a term related to ships, particularly a rating system in the British Royal Navy.

However, etymonline dates the term to 1814, while this site cites Wikipedia, and Wikipedia attributes the term first to "the 1720s," but later describes the rating system as originating in 1620.

But the earliest actual citation I can find is in the OED, which gives no explanation of the contextual development of the phrase, but provides a date earlier than etymonline with a context to which I am unsure the British Royal Navy relates, because the publication is about housing and land.

This citation is all that is given for the compound "third-rate" in the online edition of the OED, there is no definition provided or additional notes.

Does the OED's declination to attribute the term to shipping in combination with a lack of citations related to shipping that antedate the citation related to housing and land indicate that the direct connection to the British Royal Navy is dubious?

Is there evidence that "third-rate" referred to ships before it referred to houses, as Wikipedia claims without in-line citations, while providing no cited texts using the term? Or are there other reputable sources that establish the validity of the British Royal Navy connection -- particularly sources that might help explain the OED's lonely attestation?

As mentioned by Steve B in another answer, OED attests the derivation of 'third-rate' (adjective) from a primary source that refers to a British ship in 1649. The same 1649 quote attests the use of 'rate' in the nautical sense III.12.b.:

Any of various classes into which vessels are divided, according (variously, at different times) to the seniority of the captain, the number of guns carried (cf. quot. 1769), complement of crew, or size. Now hist.
Often preceded by an ordinal numeral: cf. first rate n. 1a, second-rate adj., etc.

No earlier attestation is given for 'first rate', 'second rate', etc.

OED is, however, somewhat constrained by its editorial policy regarding the types of sources acceptable; also, the OED selection of attesting quotes is constrained by the necessity of brevity as well as the OED focus on lexical rather than general historicity.

Thus, with regard to lexical historicity, secondary source attestation of the nautical origin of 'third-rate' is available at least as early as February of 1638, in the Calendar of State Papers, Domestic Series, of the Reign of Charles I, 1637-1638, which was edited and published in 1869:

The Convertive, formerly of the second rate, is of late fallen down to the third rate, and has no more allowance of cordage than ships of the third rate.

The rating system "appears for the first time...in 1626", and did not, at the time, "mark any distinction in the force or construction of the ships", at least according to the source cited and excerpted by Wikipedia, W.H. Davenport Adams' 1885 England on the Sea; or, The Story of the British Navy, Its Decisive Battles and Great Commanders. Adams also mentioned the 1626 origin of the rating system in his 1863 Famous Ships of the British Navy.

First-rate, second-rate, etc. are 1640. From British Navy division of ships into six classes based on size and strength.

and of third: etymonline

Third-rate "of poor quality" is from 1814, ultimately from classification of ships (1640s) 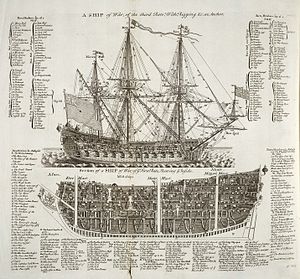 Henry Grace à Dieu was one of the first vessels to feature gunports and had twenty of the new heavy bronze cannon, allowing for a broadside. 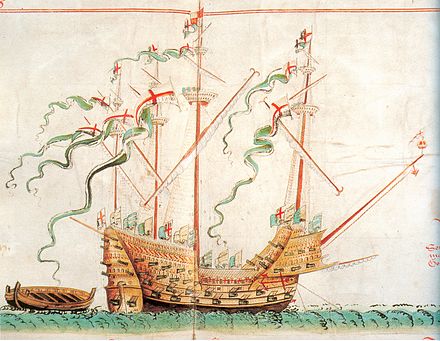 Citation from The Compact Edition of the OED (1971) under third-rate.

1649, Cromwell Let. 4 Nov. in Carlyle. The Garland, one of your third-rate ships, coming happily into Waterford Bay.

8
Origin of the phrases “third time’s the charm” and “third time lucky”?
30
Hip Hip Hooray!
5
Origin of the term "High and dry"
5
What is the origin of "Boxing Day"?
2
"I'm Alan Freed, and this is Rock & Roll!" Origin of the term?
5
Does "mouse" in the computer sense come from nautical slang?
14
Does the word 'Integral' relate in some way to the mathematical term?
11
Origin and evolution of the term "populist"
3
Origin of "battle royal" and does it exist outside of professional wrestling?