I have been seeing the following post making the rounds on social media today: 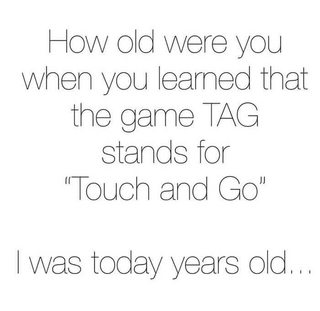 How old were you when you learned that the game TAG stands for "Touch and Go"?

I was today years old...

Now even at first glance this raised my eyebrow. So I did some quick research and nothing is said on the Wikipedia page and it would seem the game even has its own unique definition in the dictionary

A children's game in which one chases the rest, and anyone who is caught then becomes the pursuer.

which would seem to come from the primary definition

A label attached to someone or something for the purpose of identification or to give other information.

since you yell "Tag, you're it" as part of the game.

My question is, is there any evidence that tag is an acronym for "Touch and Go"? Is is possible this is technically another game, and not the centuries old children's game? Or is this just another case of "Everything you read on the internet is true. - Abraham Lincoln"

It seems to me that "touch and go" is nothing more than a backronym (Wikipedia).

From the Online Etymology Dictionary entry for tag (n.2):

What raised my eyebrow more than that was I was today years old . . .

According to this, the Touch and Go acronym is specific to competitive go-karting. https://acronyms.thefreedictionary.com/TAG

It has to be made up, as the name "tag" is an older name for the game. Tag is likely a corruption from the old english word "tick" from the Germanic/Dutch "tikken" (to touch or pat lightly). Evidence of tick being in usage is documented from around the 16th century. Also, tig, probably a corruption of tick, was around from the 1800's. I only know this as I did a bit of etymology research - where I am from, we still say "tick" and we get told we are wrong! Yet it appears we have a stronger case than tag, tig or it! So in my opinion, Tag is definitely not an acronym for "touch and go".

This meme is actually false. @Jane Wills Johnstone, I agree. As stated from Wikipedia, Meriam-Webster debunked it, and there is no current meaning or origin behind tag.

If you want to see more information on the playground game, tag, this Wikipedia page explains what it is, but more important to your question, what it means.

How old were you when you learned that the game TAG stands for "Touch and Go"?

This is pure, unadulterated ignorance trying to pass itself off as an "interesting fact". The clue is in one meaning of the verb to tag:

tag, v.1 1 a. transitive. To furnish or mark with or as with a tag (in various senses).

1627 W. Hawkins Apollo Shroving ii. i. 20 What did you give me? Nothing but a dozen of rotten silke points. You must tagge them better ere I trusse up your request.

At this stage, it becomes apparent that in a game of "tag", the person has been "marked" or tagged by being touched.

[tig (n.) 2. A children's game, in which one of the players—usually designated tig or it—pursues the others until he overtakes and touches or ‘tigs’ one, who in his turn becomes ‘tig’: the same as tag n.2 Cf. tick n.3 1b, and Sanders Wörterb. (1865) Der Zeck, ein Spiel der Kinder, wobei eins dem Andern einen Schlag giebt.]

1878 F. H. Hart Sazerac Lying Club 166 One of them, who had been ‘tagged’ seven times in succession, got tired, and proposed to change to playing house.

Not the answer you're looking for? Browse other questions tagged etymology acronyms or ask your own question.

14
Why can something be "touch and go"?
0
Words starting with "touch"
14
Where did the sports and game term "rubber" come from?
6
SWF Seeks Strong Single-word Synonym
2
What is the role/function and origin of "to" being used in the idiomatic phrases "there's something to him/her/it" & "there's nothing to him/her/it"?
6
Why does master mean 'man' and 'boy'?
4
When did 'RINO' begin to be used as an acronym for 'Republican in name only'?
6
Articles with initialisms: 'the' or no 'the', can both be correct?
1
The contrasting meanings of the word "chill"