Difference between "social" and "societal"

The relevant definition of social reads:

relating to society or its organization

The only definition of societal is:

relating to society or social relations

NGrams suggests that the word had its origins in the early 20th century and gained in popularity after the 1950s. Why did the use of societal crop up? Was it perhaps it is the more obvious and natural adjective of society? If it is used to disambiguate or distance away from certain connotations of social, what are they?

According to COCA, societal, while largely used in academia, also sees significant use in magazines and newspapers. It also convincingly outscores social when collocated with terms such as shift and estrangement. On the other hand, the use of societal worker, societal service, societal justice etc., do not register on COCA's scales.

Social has over 500M hits in NGrams, as opposed to only 7M for the more recent societal. So the main difference is OP probably always wants to use the former, because that's the standard word and it covers all meanings.

Societal is the more recent word for of [human] society, which is its only meaning. It's primarily used in academic writing, so OP is unlikely to need it.

It appears "societal" was primarily limited to academic circles in the early 20th century and seems to have been popularized by social scientists in the late 1950's. The first use I could find was in the book Societal Evolution: A Study of the Evolutionary Basis of the Science of Society by Albert Galloway Keller, which has a copyright date of 1915.

The Panama Daily News in 1957 wrote an analysis of the book Citadel, Market, and Altar: Emerging Society, Outline of Socionomy, the New Natural Science of Society by philosopher and social thinker Spencer Heath, and appears to credit him with coining the term "societal," though that is likely a misattribution by the journalist, since the term had already appeared earlier.

Mr. Heath seems to coin words, but he has an index in the rear that defines the meaning of these words.

In this chapter he uses the word "societal." He defines it as follows:

"This differs from the term social only in being more specific. It has reference always to the general organization of a population... whereas social often includes any kind of human, or even animal, interrelationship. 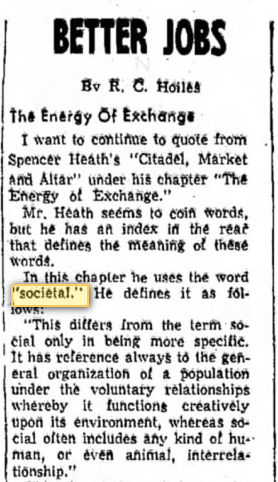 The book in question was published in 1957 as well. I can't find the index referred to in the newspaper article in actual print. Since the journalist treats the term as unrecognizable, this seems to fuel the notion that the term was quite rare and academic, but perhaps Heath's book did play a role in popularizing the term as a more specific term for "social" with regard to human society and its structure in particular.

Social, on the other hand, is a much less recent term. Though it had previously been used to refer to interactions between individuals, Etymonline attributes offers a separate origin for the term with regard to society:

Meaning "of or pertaining to society as a natural condition of human life" first attested 1695, in Locke.

The use by John Locke was in reference to the "Social Contract" theory pertaining to the origin of civilization.

Several families. . . .somehow came to be settled in proximity to one another, and formed a social bond; they needed a general whose conduct might defend them against their enemies in war

Although contract theory in this sense had been written about prior to Locke, such as in Hobbes's Leviathan in 1651, the book never used the word "social."

Oh, I already was dizzy from looking at too many answers about this, until I stumbled here in these forums I like. By then I had my mind made up, on what i already knew... So my nearly definitive stance on this is...

Societal relates to the spontaneous and/or directed structuration and organization of society as a whole, while Social refers mostly to the relations of persons or groups within society.

So societal was probably created and used to specify this holistic approach [which at long last is percolating into people's view]. Until then social would have sufficed.

I think social stands for inter-relationship whereas, societal stands more for collective tendency.

Not the answer you're looking for? Browse other questions tagged meaning differences adjectives terminology sociolinguistics or ask your own question.