From “breath of life” to “rescue breath”

While watching a YouTube video called How to Perform CPR, I was struck by the expression used by the instructor, “give one rescue breath” (1.52) and “to perform a rescue breath” (2.00).

“Rescue breath” is a term with which I am most unfamiliar. As a child growing up in London during the 1970s I remember hearing about the kiss of life and as a teenager, learning the more formal and medically accurate phrase, mouth-to-mouth resuscitation

And the LORD God formed man of the dust of the ground, and breathed into his nostrils the breath of life; and man became a living soul. (Genesis 2:7)

Apparently, this practice became medical protocol as late as 1950

In 1950 AD, the mouth-to-mouth resuscitation method was introduced. A number of organisations started a promotional effort to raise awareness in the USA public of this procedure that had been advocated within the United States army during World War II
Facts, Legends and Myths on the Evolution of Resuscitation

It appears the method used today was perfected in the US but what of its terminology?

The technique was documented for the first time in 1744, a Scottish surgeon named William Tossach (Tossack), published a paper recounting how he saved a miner's life. In 1732, he successfully performed mouth-to-mouth resuscitation on a man whose body gave no signs of life, apparently asphyxiated by smoke inhalation.

I applied my mouth close to his, and exhaled as strong as I could: but having neglected to close his nostrils all the air came out of them. Wherefore taking hold of them with one hand, and holding my other on his breast, I blew again my breath as strong as I could, raising his chest fully with it; and immediately I felt six or seven quick beats of the heart

Yet by 1790, many physicians agreed that it did more harm than good

To blow one's own breath into the lungs of another is an absurd and pernicious practice. Benjamin Waterhouse

Thus the Royal Humane Society was persuaded to advocate in favour of bellows ventilation, which consisted of either introducing the instrument into a nostril while simultaneously closing the other nostril and mouth or by blowing the tobacco smoke directly into the rectum of the unfortunate victim. 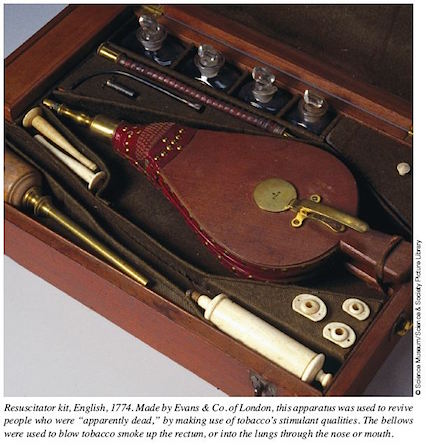 As far as I could gather, the life-saving method first described by Tossach had no official name.

In fact, none of the dictionaries I consulted shed any light; Merriam-Webster, English Oxford Dictionaries, Cambridge Dictionary, Wiktionary, and The Free Dictionary do not have any dates for mouth-to-mouth resuscitation. Only, weirdly enough, the EOD has some historical detail on rescue breathing, it says the term was first used in the 1950s.

It's been brought to my attention, by @user070221, that mouth-to-mouth resuscitation was first recorded in 1960–65. However, the first instance I found–via Google Books–is dated 1958, which is still far later than I had anticipated, in The Journal of the Maine Medical Association

Briefly the steps in mouth-to-mouth resuscitation in infants are: […]

This is not by any means a complete answer, but it is too long for a comment, so I will post it here. An older technical term for "mouth-to-mouth resuscitation," usually—but not always—described as a technique for treating infants, is "mouth-to-mouth insufflation," which appears in a various publications going back to 1887. From an article on "Asphyxia Neonatorum" in The Medical Record (November 19, 1887):

Remove any obstruction to the entrance of air. Clear the mouth and fauces of mucus. Apply brisk friction up and down the spine, especially in the cervical region. Dash small quantities of cold water upon the face. Plunge the child to the neck into hot (103° to 105° F.) and cold water alternatively ; hot water alone was sometimes very effectual. Mouth-to-mouth insufflation. Artificial respiration, which was best accomplished by insufflation.

He [Dr. Charles Jewett] had not been able to resuscitate where he had been unable to detect cardiac movement. He had practiced Sylvester's and Schultze's methods and insufflation with a tube, but his chief reliance was upon the mouth-to-mouth insufflation. Place the child upon the back, with a folded blanket under the neck, so as to put the head in the position of semi-extension ; then closing the nostrils he presses with the other hand over the epigastrium. He had endeavored to insufflate the air from the mouth, AFTER THE MANNER OF USING THE BLOW-PIPE, instead of using it from the lungs. Of course, undue force must not be used in practicing this method. Suspension of the child by the feet was a method that had some advantages.

The old-fashioned or direct method now generally applied in such cases [requiring resuscitation] is to place the patient upon his back and to compress and expand his chest cavity by pressure of the hands. Renewed life has been breathed into young children by what is known as the mouth-to-mouth insufflation. The operator places his mouth to that of the patient, and by keeping up a systematic process of exhalation and inhalation starts the latter's lungs to working again.

The American Heritage Dictionary of the English Language, fifth edition (2011) has these entries for insufflate and insufflation:

insufflate tr.v. 1. To blow or breathe into or on. 2. To treat medically by blowing a powder or gs, or vapor into a bodily cavity.

insufflation n. 1. The act or an instance of insufflating. 2. Ecclesiastical A ritual act of breathing on baptismal water or on the one being baptized.

Not the answer you're looking for? Browse other questions tagged american-english terminology british-english history or ask your own question.

8
The history and use of the term “moth hour”
12
The etymology of “redhead” vs. “ginger haired”
2
What is “Broken Britain”?
2
Has “Extraordinary” Ever Been Spelled with an A-O Ligature?
2
What does it mean by “to begin my life with the beginning of my life” as in David Copperfield?
2
What is it called to argue in favor of something one actually opposes
2
Is “… microphones don't have cameras” a Freudian slip, intentional, or [sic]? How to tell?
10
Origin of “dripping with [sarcasm]”
1
Who could be a “well-known canner”?